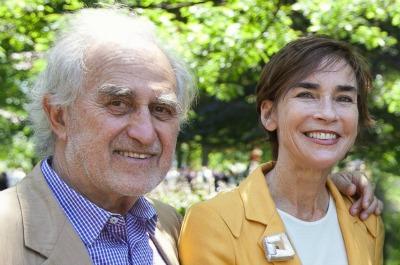 An exhibition area will honor the 1958 lacrosse team

Thanks to a $6 million gift from Samuel G. Rose '58 and Julie Walters, a new two-story, 25,000-square-foot athletics-training center will replace the current 1960s-era locker rooms at Dickinson's recently renovated Biddle Field. The new facility, which will be named the Durden Center to honor the tenure of President William G. Durden '71 and his wife, Dr. Elke Durden, adds a sixth project to the extensive campus-enhancement effort the college announced in April. The project will start as soon as possible with construction likely to begin in the fall.

The new Durden Center will feature separate locker rooms for men's and women's lacrosse, football, field hockey, coaches, officials and visiting teams; a strength-training and free-weight room; sports-medicine facilities; a laundry and equipment room; and a team-meeting/event room with a viewing platform overlooking Biddle Field. The entrance will include an exhibition area to honor Dickinson athletics, including the 1958 lacrosse team that won a national championship. Rose played for the team from 1954 through 1958.

Biology major Suleiman Sudah '15 of Franklin Park, N.J., is excited about the Durden Center and the opportunities it will provide Dickinson athletes for year-round training and workouts. The all-conference lacrosse player is eager to use the facility during his time on campus. "The new athletic training center offers the size, equipment and accessibility that is capable of transforming our athletes from really good to great and our programs from successful to legendary," said Sudah.

Philanthropists and long-time supporters of Dickinson, Rose and Walters recently gifted The Sam Rose '58 and Julie Walters Prize at Dickinson College for Global Environmental Activism and prior to that The Samuel G. Rose '58 Scholarship for economically disadvantaged students from urban areas.

"Sam and Julie are true and enduring friends of the college," said Durden. "They believe liberal-arts education is more important than ever. A new training facility permits the college to replace an obsolete structure that is totally inadequate. It also will save the college considerable money as various activities are centralized."