From NBC to Bollywood, Rachit Tiwary '11 discovers his passion 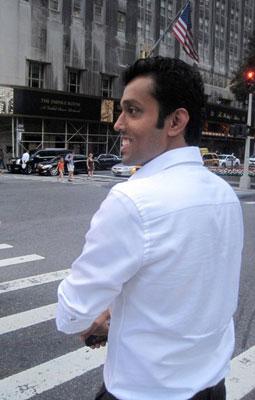 
Rachit Tiwary '11 had exactly two minutes to convince an audience of 40 seasoned executives that they should hire him. At a critical point of his presentation, he inserted a joke. "So I called my dad to tell him I was changing my major to entertainment marketing," he told them. "Good thing he was a cardiologist, or he'd have had a heart attack on the spot."

That true-life anecdote brought down the house and distinguished Tiwary from the throng of interviewees for a much-coveted post at NBC. It also revealed the cheerful confidence and creativity that guides this recent graduate along an unexpected career path.

Tiwary had entered Dickinson as a biochemistry & molecular biology major with visions of a very different professional life. "Growing up in India, my career choices were simple: I was expected to be either a doctor or engineer, so I chose doctor," he says. "But when I came to Dickinson and enrolled in my first biochemistry course, I realized it wasn't really what I wanted to do. And that was a surprise."

Tiwary enjoyed business and marketing classes and was fascinated by arts and entertainment (he even choreographed performances for Dickinson's Bollywood dance troupe). After some serious soul-searching, he switched his major to international business & management with a minor in film studies, his sights set on the business of television and film.

It was a leap of faith for the college sophomore, whose knowledge of the American TV industry had been limited to one of the few U.S. shows he'd seen broadcast in India: Friends. "I had a lot to learn," he says. "But I studied hard because I loved it." Tiwary also tapped Career Center resources, practicing interview techniques, polishing his resumé and dedicating one hour each week to online networking through DickinsonConnect.

By his junior year, he had acquired a spring internship at NBC through the Dickinson in New York program.

Through the internship, Tiwary sharpened his technical skills, managing marketing spots for more than 200 NBC affiliate stations and logging promo codes for Sunday Night Football, Nightly News, TODAY, Meet the Press and Dateline. "It felt great to see [my] work on national television every single day," he says. Soon, he was selected to train fellow interns and serve as an NBC campus liaison.

"He was so good at it that halfway through his internship, we created a new position for him as intern captain," writes Anne Nichols, NBC's vice president of affiliate marketing, in a glowing letter of recommendation. As a result, Tiwary's bosses extended the spring internship through the summer. The following semester, he garnered the 2010 PennACE JoAnne Day Student of the Year Award for business, the only student in Pennsylvania to be so honored from a pool of students in 80 participating schools.

In his final year at Dickinson, Tiwary was hired to take part in the NBC Page Program, which boasts alumni such as former Disney CEO Michael Eisner and on-air notables Ted Koppel, Regis Philbin and Bob Keeshan (aka Captain Kangaroo). The three-part interview process was grueling, with 7,000 applicants vying for one of 60 positions.

The fulltime, yearlong position allows stellar interns to find their niche within the company by working in several different divisions of NBC. Just months after graduating from Dickinson, he was working on shows such as Saturday Night Live, Late Night With Jimmy Fallon and The Dr. Oz Show. Before the year was up, he was hired by NBC's marketing division. Six months into the page position, he was snapped up by Oxygen Media, where he worked as a consumer- and ad-sales marketing assistant.

From small to silver screen

Five years after coming to the United States from his native India, Tiwary is moving to Mumbai, where he will use his NBC contacts to break into a marketing position in Bollywood. It's a thrilling prospect for this ambitious cinephile, who grew up watching musicals on Indian television and remains enchanted by the genre. And it's a path he's grateful to have found.

"It's hard for many people to know what they truly want to do with their lives," he says. "But I learned to take risks and go with my instincts—to pursue what I love. I am excited to take this journey."