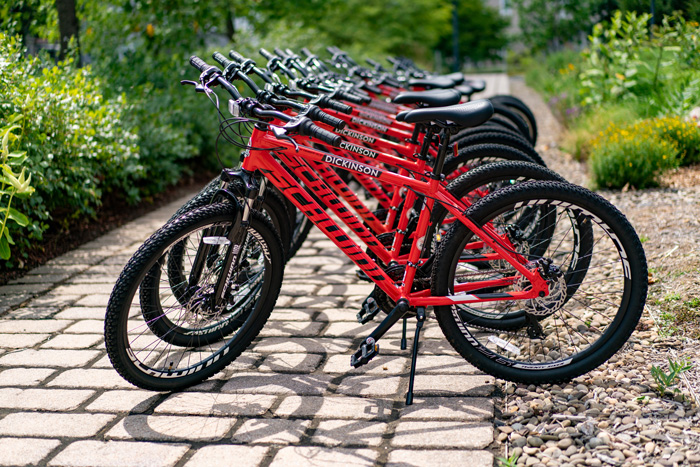 Dickinson's sustainability programs are once again in the news! The college was recently named among only 37 higher-education institutions across the nation to be awarded a Bicycle Friendly University (BFU) Award this year.

The BFU Awards are bestowed by the League of American Bicyclists, a national organization that works with 221 American colleges and universities and their community partners to make bicycling and cycling safer and more accessible. This marks the fourth year in a row that Dickinson's biking program has been granted gold BFU Award status, having been upgraded from silver honors to gold in 2018. The college has been a BFU-Award institution since 2014.

“We’re excited by this honor and by the fact that we’ve made a lot of progress and innovation over the years to get more bikes on campus and the community,” says Lindsey Lyons, Dickinson’s director of sustainability learning. “Our education programs, workshops, community programs, bike shares, group rides and infrastructure lead the way for small liberal-arts colleges.”

The gold BFU honors arrived shortly after Dickinson ranked second on the Princeton Review's 'Top 50 Green Colleges' list. The college also is ranked first among baccalaureate institutions on the Association for the Advancement of Sustainability in Higher Education’s most recent “Sustainable Campus Index.” Other sustainability achievements include being one of the first 10 colleges in the U.S. to reach carbon neutrality, boasting one LEED Platinum-certified building and six LEED Gold buildings on campus, and being a certified an official “Bee Campus USA.”

A cornerstone of Dickinson’s biking initiative is the college’s Red Bikes program, which makes short-term bike shares available to students, faculty, staff and visiting family members. That initiative got a big boost this year, thanks to Bruce Rychlik ’89. His donation funded the purchase of 20 new Red Bikes. Two e-bikes and a cargo trailer are also being added to the fleet with his gift.

Providing for bikes is a meaningful way to give back for this avid cyclist, member of Dickinson’s Mermaid and John Dickinson Societies and Alumni Council volunteer, who also established a Dickinson scholarship in honor of his late grandfather, an Italian immigrant who put himself through night school. “I give to Dickinson so that others may benefit from what the school has to offer. It’s that simple,” Rychlik says. “The amount that you give is not important. I think it’s more important that you give something, which can be a donation or donating time as a volunteer or engaging with the Dickinson community as a lifelong learner.”

While on campus last summer, Rychlik test-drove one of the bikes and enjoyed cycling around campus and snaking through the alleyways of Carlisle.

“It’s just a pleasant way to get around and to explore beyond what you can easily do by foot,” says Rychlik, who discovered biking—and completed three triathlons—as a Dickinson college student and, during the past decade, has raced, taken multiday cycling trips in Europe, mountain biked, raced cyclocross and fat-biked in the snow. “The best part of biking has been being an active part of the community as well as the friends I have made and relationships I have rekindled due to the bicycle. There are far too many to list, and the joy has been immeasurable.”