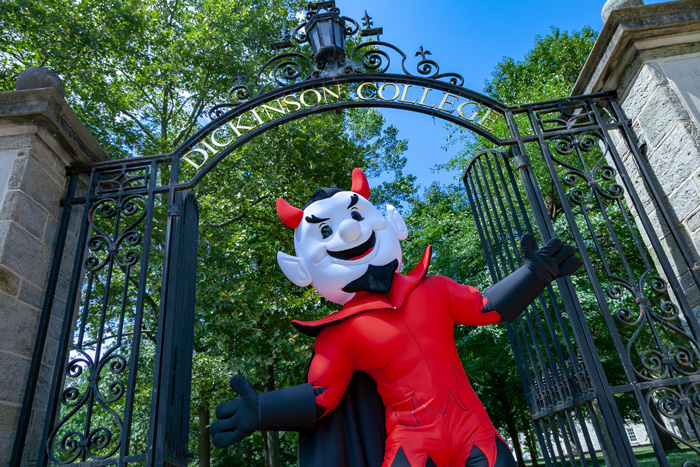 The 2011 men's lacrosse team, six alumni and an esteemed coach join the ranks of the best Dickinson has to offer in the athletic arena

Dickinson Director of Athletics Joel Quattrone has announced the new class of Dickinson Athletics Hall of Fame inductees. The six former athletes and one distinguished contributor will join the Hall of Fame the during Red & White Weekend, April 14-15, 2023.

Catherine Campbell ’12 | Cross Country and Track & Field
Campbell was a two-time McAndrews Award winner, honored as the best athlete at Dickinson in 2010 and 2012. She helped the women's cross country team reach four consecutive NCAA Mideast Regional second place (2008-11) finishes, which allowed the Red Devils to qualify for the NCAA championships each of those seasons. As an individual runner with cross country, she was a three-time First Team All-Centennial Conference and three-time Centennial Conference Academic Honor Roll. On the track, Campbell won the 2012 Centennial Conference indoor track and field 3,000m champion, while earning USTFCCCA indoor All-American honors in 2012 for the 5,000m. Outdoors, she was a three-time All-Centennial Conference honorable mention in both the 10,000m and 5,000m. After graduation Campbell qualified for the U.S. Olympic marathon trials.

John Haire ’11 | Men's Lacrosse
Haire was a two-time (2010, 2011) First Team All-Centennial Conference honoree and earned USILA All-American honorable mention those same seasons. In 2011, he served as a team captain of the squad that ran the table in conference play en route to capturing the Red Devils’ first-ever Centennial Conference title as well as their second straight NCAA tournament berth. Haire was also a key cog in a magical run by his graduating class, whose 45 wins was the most wins by a single class at the time.

Sue Jehl ’96 | Women's Lacrosse
Jehl was a strong defender during her time at Dickinson, racking up 142 groundballs and 27 draw controls. After being named honorable mention All-Centennial Conference and Regional All-American honorable mention in 1994, Jehl had a stellar 1996 campaign, as her 56 groundballs and 18 draw controls led to a First Team All-Centennial Conference selection as well as Regional All-American status. At the end of the 1996 season, she was chosen as a Third Team All-American, while being chosen to participate in the North/South Senior All-Star Game.

Amy Jennings ’09 | Women's Lacrosse
Jennings helped the Red Devils reach four consecutive Centennial Conference semifinals, from 2006 to 2009. As a first-year student in 2006, she was a major reason that Dickinson reached their first ever NCAA tournament. During the 2006 campaign, Jennings tallied 42 goals, while handing out 22 helpers. She also broke the 60-point mark two other times, with 72 in 2008 and 65 in 2009. Her streak of 72 straight games played and started are school records. At the time of graduation, she held the record for career points (246) and assists (114). Jennings racked up individual accolades as well, with a three-time All-Centennial Conference selection, including a First Team pick in 2008. She was also named All-Metro Region all four years, with two First Team honors.

Emma Murtaugh ’11 | Softball
Murtaugh was a key contributor for a Dickinson softball program that went to three Centennial Conference championship games, which included one victory in 2010 and an NCAA tournament appearance. She holds school records for career slugging percentage (.649), home runs (26) and total bases (259). In addition, her seven home runs in 2009, 2010 and 2011 still stand as single-season records. Her school ranks at time of graduation were notable in putouts (556; 3rd), games played (138; 2nd), runs scored (88; 3rd), RBIs (99; 3rd), walks (59; 3rd) and doubles (32; 3rd). Murtaugh was selected three times to the All-Centennial Conference teams, including two First Team picks (2008 and 2011). As a senior she was chosen to the NFCA Third Team All-East Region.

Pat O'Connor ’10 | Football
O’Connor was a dominating force for the Red Devils during his time in Carlisle. He helped the football team go undefeated (8-0) in the big rivalry games against Franklin & Marshall and Gettysburg, while posting a 31-11 overall record, including a conference title in 2006 and a trip to the NCAA tournament. At the time of his graduation, O’Connor held school records in a variety of categories: career receiving yards (2,548), career receptions (167), single-season all-purpose yards (1,912), single-season receiving yards (1,324), single-season receptions (81), single-game all-purpose yards (396) and single-game receiving yards (248). In 2008, O'Connor was an All-Centennial Conference selection as a wide receiver (First Team) and kick returner (Second Team). He was also recognized on a national stage, selected to the D3football.com All-Region Second Team in 2008, while being named D3football.com All-American honorable mention that same year.

Paul Richards | Swimming
Richards led both the Red Devils men's and women's swimming programs for 26 seasons, posting a record of 200-102 with the women and 174-98-1 with the men. Under Coach Richards, the programs produced two Fulbright Scholars and had numerous student-athletes inducted into the prestigious Phi Beta Kappa Honors Society. In every semester during his 26 seasons, Richards had at least one of the programs earn the All-Academic Team Award from the College Swim Coaches Association of America. Off the pool deck, Coach Richards was actively involved with many groups and community events across the campus, serving as an advisor for Relay for Life, Scroll and Key and Spectrum. Richards has since returned as coach for the 2022-23 season.

Team Recognition | 2011 Men's Lacrosse Team
The team went 17-2 overall with a perfect 8-0 mark in the Centennial Conference. The Red Devils were a flawless 9-0 at Biddle Field, which included a 6-5 win over Gettysburg in the conference championship game and sent the team to the NCAA tournament. Dickinson advanced as far as the Elite Eight to face Salisbury University after they knocked off Wittenberg 11-4 in the second round. Across the season, three players scored 20 or more goals: Christian Beitel (29), Bobby Kingsley (26) and Brian Cannon (20). The group of Draper Donley, Chip Murray, Brandon Palladino, Parker Waldron and Peter Zouck all had over 40 groundballs apiece, while goalie Greg Hanley had a 7.64 goals-against average for Head Coach Dave Webster.