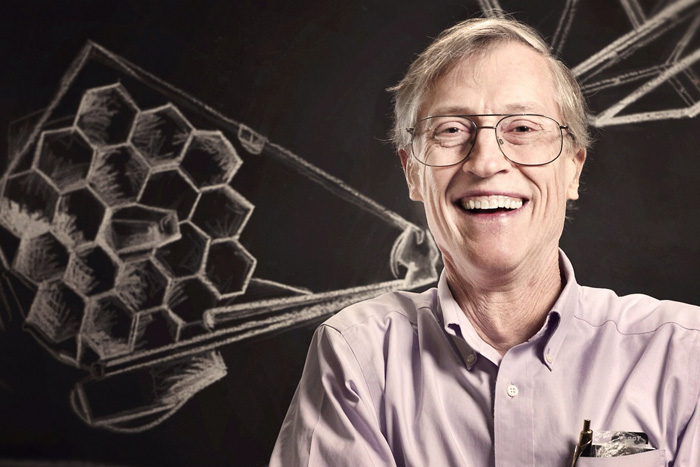 This year’s recipient of Dickinson’s Joseph Priestley Award, given annually to a distinguished scientist whose work has contributed to the welfare of humanity, is John C. Mather, senior astrophysicist in the Observational Cosmology Laboratory at NASA's Goddard Space Flight Center and senior project scientist on the James Webb Space Telescope.

Mather’s career is notable in many ways, and in 2006 the Royal Swedish Academy of Sciences awarded him (with George F. Smoot, UC Berkeley) the Nobel Prize for Physics for his precise measurements of the cosmic microwave background radiation, the remnant of the Big Bang. The measurements were taken with the Cosmic Background Explorer (COBE) spacecraft, and the data set forms the foundation of a new era of precision cosmology unveiling both the birth and fate of the entire universe.

“Issues that had been debated for decades were swept away with the first few months of COBE observations—for instance, the Hubble constant, a number that describes how fast the universe is expanding, which had been uncertain by a factor of two, was suddenly known to within 5%,” says Robert Boyle, professor of physics & astronomy. “I have been to many American Astronomical Society meetings where people have received standing ovations after their talks, but I have only once seen a slide get a standing ovation. And that was when John presented results that proved that the radiation from the Big Bang precisely matched the expected blackbody spectrum.”

Since 1995, Mather has been the senior project scientist on the Webb Telescope, the largest and most powerful space science telescope NASA has ever built. The images the telescope has been sending back since it went online have captivated a global audience and shed light on previously unseen corners of the universe.

Across his career, Mather has served on advisory and working groups for the National Academy of Sciences, NASA, the National Science Foundation and the Center for Astrophysical Research in the Antarctic. Besides the Nobel Prize, Mather has been the recipient of more than 50 other awards, among them several from the Goddard Space Flight Center and NASA and dozens from international scientific organizations and universities around the world.

While Mather is on campus in March 2023, he’ll deliver a public lecture and meet with students in and out of the classroom.

“His visit will be a wonderful opportunity for students and community members to interact with someone who is not only a past Nobel Prize winner for his groundbreaking contributions to our understanding of the universe,” says Brett Pearson, associate professor of physics & astronomy, “but also the lead scientist on a NASA mission, with the Webb Telescope, which is currently making front-page headlines around the world.”