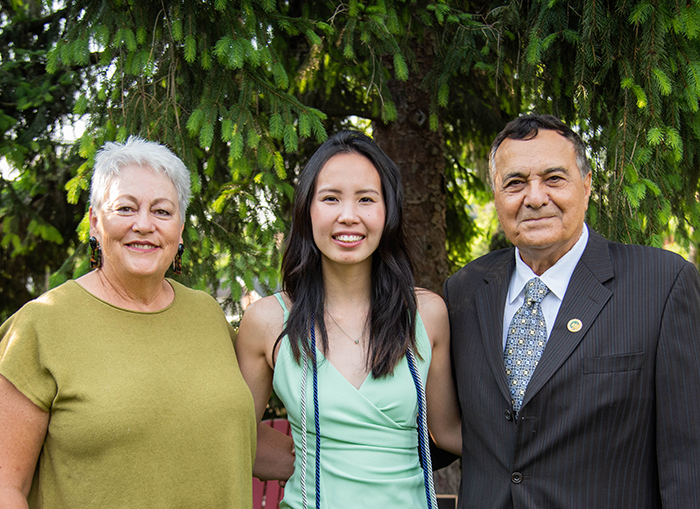 Albert ’60 and Virginia Alley wanted to give back to Albert's alma mater in a personally meaningful way. They just weren’t sure how.

“We explored different options for quite a few years, but we just couldn’t come up with the right thing for us,” says Albert. “So we asked our granddaughter, Laney, who was then a student at Dickinson, if she could identify a need at the college that could work.”

With Laney's help, the Alleys decided to establish a new initiative at Dickinson that aligned with their shared vision to provide students with a means to enhance their academic endeavors in a way that encourages volunteerism and fosters a lifelong commitment to giving back.

Participation in scouting, which promotes leadership skills, personal character development and civic involvement, was strongly encouraged in the Alley family. All five Alley sons earned Eagle Scout ranking—including Albert, who attained the Eagle Scout rank at the early age of 13.

Dickinson was also a common link; when Albert graduated, he became the sixth member of his immediate family to call himself an alum.

“Dickinson trained me to work hard and apply myself,” says Alley, who majored in biology and got involved with Alpha Chi Rho and intramural sports. “That prepared me well for medical school.”

The Vietnam War was intensifying when Albert graduated from Temple Medical School. He enlisted in the Air Force, attained the rank of captain and eventually directed aerospace medicine at Castle Air Force Base in California. During his two years as a flight surgeon, he developed a keen interest in ophthalmology and surgery. After completing his residency at Temple he launched a four-decade career as a board-certified ophthalmologist and surgeon in Lebanon, Pa. Alley was clinical professor of ophthalmology at the Penn State University College of Medicine in Hershey, Pa., and also served a term as president of the medical staff at the local Good Samaritan Hospital while volunteering on the hospital's board of trustees.

Albert’s first marriage produced three daughters—Julie, Linda and Cynthia—who were encouraged by Dad to share their time and talents to the benefit of others. 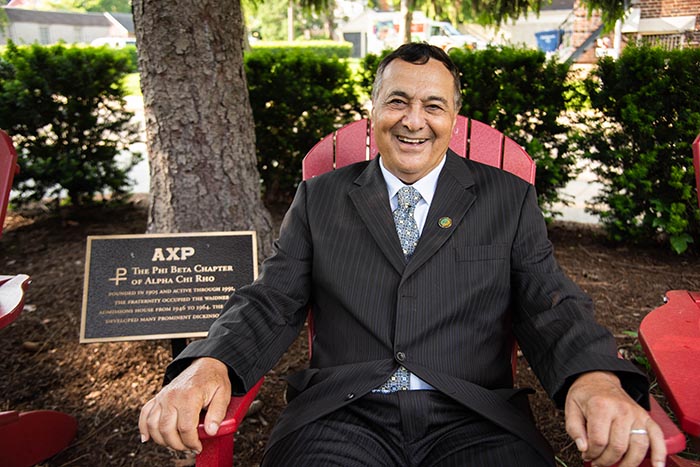 Albert has long believed that a legacy of giving can develop at an early age, and he believed in donating his time and talents as best he could, whenever and wherever he could. While completing his residency at Temple, he found time to join the Big Brothers organization and mentor a troubled young man. While growing his medical practice, he joined Rotary in 1974, serving first as president of the Lebanon Rotary Club and later as Rotary 7390 district governor, and he continues to be an active Rotarian today. He has served on the boards of Developmental and Disability Services of Lebanon County and the Susquehanna Association for the Blind (now Vision Corps). His commitment to scouting also continues, as he has served in various leadership positions as a scout leader and chairman of the Horseshoe Trail District of the Pennsylvania Dutch Council. He also volunteers on the council board.

Albert’s true passion came to fruition in 1990 when he founded World Blindness Outreach Inc. (WBO). This nonprofit foundation has taken volunteers to more than 25 developing countries on more than 100 missions, and Albert personally has selected medical professionals and volunteers to accompany him. WBO volunteers have performed more than 10,000 surgeries, including corneal transplants, strabismus correction and cataract surgeries. An early mission to the Dominican Republic that occurred during daughter Linda’s time in the Peace Corps resulted in WBO returning to this location for more than 25 years. WBO has donated large quantities of surgical supplies and equipment to medical clinics in several countries and has provided training for medical personnel.

Dickinson awarded Albert an honorary doctorate in humanitarian service and a Distinguished Alumni Award. He’s also a recipient of Temple Medical School’s Outstanding Alumnus of the Year Award, the Lions Club’s Good Neighbor of the Century and Melvin Jones Fellow Awards and the Rotary Lifetime Achievement Award. He garnered humanitarian service awards from the Pennsylvania Academy of Ophthalmology and the American Academy of Ophthalmology and received the Boy Scouts’ coveted Distinguished Eagle Scout honor. 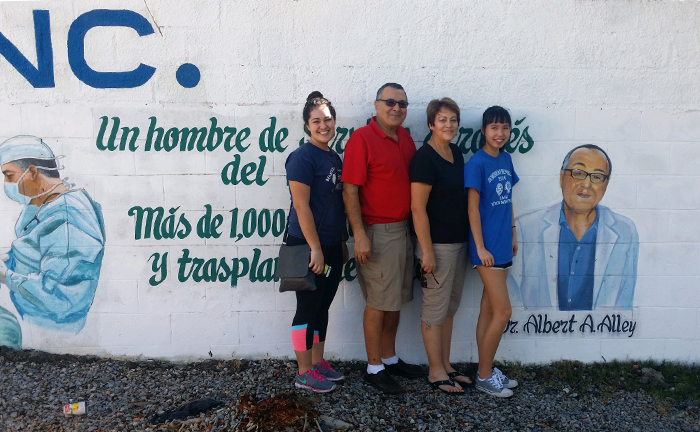 Albert '60 and Virginia Alley pose with granddaughter Laney Herndon ’22 (far right) and grand-niece Madison Alley ’16 (far left), before a mural created in Albert's honor during the 2016 WBO mission trip to the Dominican Republic.

In 2004, Albert was introduced to Virginia through a good friend and WBO volunteer. A widow with two daughters, Virginia shared Albert’s strong dedication to faith, family and philanthropy. Two years later, they were engaged, and two years after that, they married.

Both remain involved with WBO—Albert, as founding president—and many of their siblings, children, grandchildren, nieces and nephews have participated in mission trips or volunteered through the organization. The couple established the Alley Center for the Blind in Lebanon and the Albert and Virginia Alley Endowment for International Outreach in Ophthalmology at Penn State College of Medicine. Temple Medical School, the Rotary, the Boy Scouts and other organizations and causes all continue to benefit from their philanthropy.

“We’ve been focusing on finding ways to give to organizations that have played an important part in Al’s life and development,” explains Virginia, “and Dickinson was the last piece of the puzzle.” While they gave back regularly, they hadn’t yet found a way to make a more lasting imprint.

Laney, a daughter of Linda, is a member of the class of ’22 and the 12th member of the Alley family to earn a Dickinson degree. Having become interested in medicine during a WBO mission trip, she declared a neuroscience major at Dickinson. She also played volleyball, joined Kappa Alpha Theta, served as a tour guide and volunteered through Big Brothers-Big Sisters and at the local hospital, where she received training as a patient care tech.

And, at her grandpa’s suggestion, she kept an eye out for areas of need.

During senior year, Laney took part in a Mosaic focusing on cross-cultural attitudes toward death and dying. “It was a great experience,” she remembers, “but I really wanted a more hands-on kind of volunteer trip that focused on health studies”—a trip like the WBO mission she’d taken a few years before.

Speaking with health studies and Center for Civic Learning & Action staff, Laney discovered that the college’s service trips occasionally touched on health-related topics, but not always.

“I thought it would be really cool if Dickinson had a regular service trip program for students interested in health careers, so they could see the ways that what they’re learning can really impact a community,” says Laney, who’s now working at a Pittsburgh hospital and applying to medical schools, “because sometimes when you’re just learning about medicine in school, you can lose focus on who you want to serve and why.”

“We loved the idea,” Albert says. 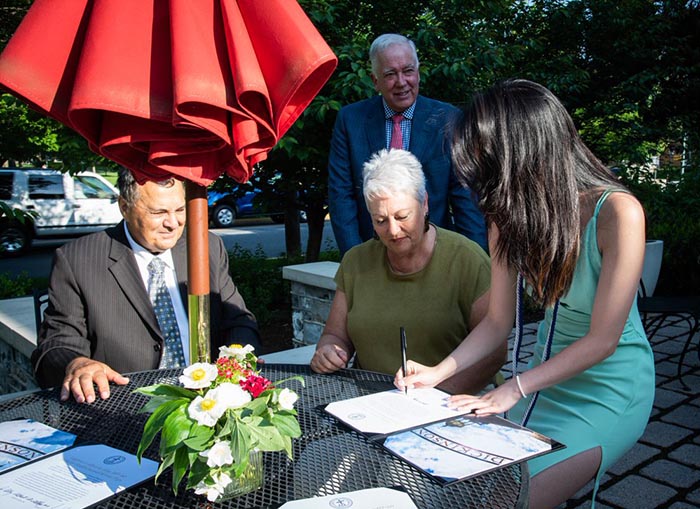 Laney Herndon '22 signs the gift agreement for the new program she inspired as her grandparents and President John E. Jones III '77, P'11, look on. Photo by Caroline O'Conner.

The gift that keeps giving

Dedicated to Laney and aided by Dickinson’s robust global and local partnerships, the Virginia & Albert Alley, M.D. ’60 Fund for Health-Focused Service Trips is a permanent program that makes domestic and international service trips focused on health studies available to eight to 10 students annually. Run by Dickinson’s Center for Civic Learning & Action, the program launches this year.

For health studies students and those interested in that path, it’s a chance to apply targeted knowledge and gain career-ready skills and experiences.

And, as Albert adds, it’s a way for the philanthropists to find a deeper sense of meaning in their own lives.

“This program is one way we feel we can leave a few footprints behind,” he says, “and I believe that’s the greatest challenge we all face in life. We all have a desire and calling to do something that’s more than just a job, something that’s bigger than ourselves. We just need to find the right vehicle.”