From Court to Field 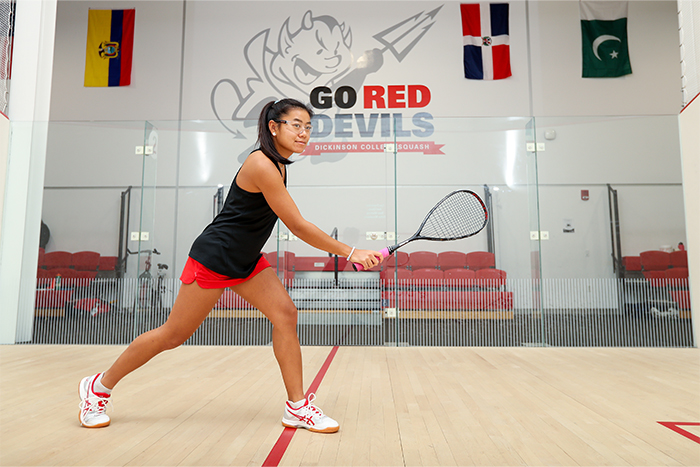 Usually, when a sports season is over, players take a deep breath, reflect and look ahead to next season—and look forward to taking a break from the action. But when the Dickinson squash season ended in February, Emerson Rains ’24 wasn’t quite done and wasn’t quite ready to sit idly by and look ahead to next season. So she showed up as a midseason walk-on with the lacrosse team—and ended up a starting all nine games she played.

“Emerson was a surprise addition to our team that we didn’t know we needed,” says Kim Masimore, head women’s lacrosse coach. “It’s a difficult situation to join a team late, but Emerson’s kindhearted nature, willingness to learn and team-first mentality made it a seamless transition—and now we can’t imagine the team without her.”

Rains grew up playing soccer, but she began learning squash when she was 11 and lacrosse at 12. Not coincidentally, both sports Rains picked up in middle school were the sports of choice of her mom, Jane Dietze, who played both in college. (And the Rains family’s love of athletics doesn’t end on the field. Dietze and spouse Robin Rains just endowed Dickinson’s Women’s Athletics Endowment, a fund created to ensure that women’s sports continue to thrive at Dickinson.)

Rains never put down the squash racket, but COVID knocked out her senior lacrosse season, and she went from junior year of high school to her sophomore year in college without having picked up a lacrosse stick. At Dickinson, though, it all came back quickly, with the help of her teammates.

“Being surrounded by a great team work ethic with amazing teammates and coaches helped me get into the sport again, allowing me to find my footing quite quickly,” Rains says. “Soon enough, I felt pretty comfortable back on the field!”

Indoors on the squash court, Rains’ sophomore season was highlighted by a five-game victory over her opponent from Hamilton College, followed by big wins over Mount Holyoke, Franklin & Marshall and Georgetown University. She credits the hard work and competition on both the squash and lacrosse teams with providing constant physical and mental challenges, all of which help her thrive.

“Being on a team has also taught me crucial leadership and teamwork skills, which have helped me grow as a person and will be with me the rest of my life,” says the environmental studies major, who sees her passion for environmental issues and media driving her postgraduation career. “My Dickinson experience has been amazing because of my sports teams and the teammates, mentors and coaches I’ve met along the way—not to mention the people I’ve met through my classes and the sorority I joined! I’ve gotten to meet so many new people and open myself up to a whole new group of wonderful friends.”