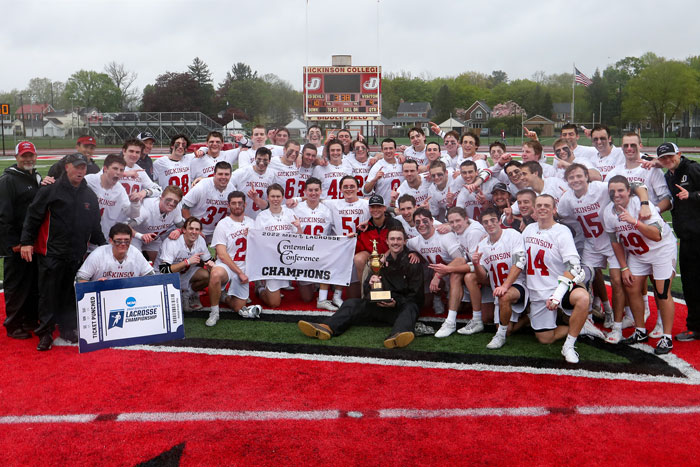 The Red Devils took the title as they extended their 2022 undefeated streak to 18-0 as they defeated Gettysburg in the Centennial Conference finals.

The 10-9 victory marked the third time in CC finals history that the Devils have defeated the Bullets by a single goal to take the title. Goalie Chris Brandau '23 was named the tournament Most Valuable Player, making 23 saves across the two games, including 14 in the final.

The Devils will soon begin their quest to win a national championship, as Dickinson hosts the NCAA Division III men's lacrosse second and third rounds next Saturday and Sunday.

On Saturday, May 14, at noon, the Red and White will play the winner of Wednesday's first-round game between the Ducks of Stevens Institute of Technology (12-7) and the SUNY Maritime Privateers (11-7). Gettysburg (12-7) and the Roanoke College Maroons (13-6) will also play on Biddle Field Saturday, at 3 p.m. The winner of each Saturday game will face off on Sunday at 3 p.m. for a spot in the quarterfinals.

See the NCAA’s website for the full NCAA Division 3 bracket.