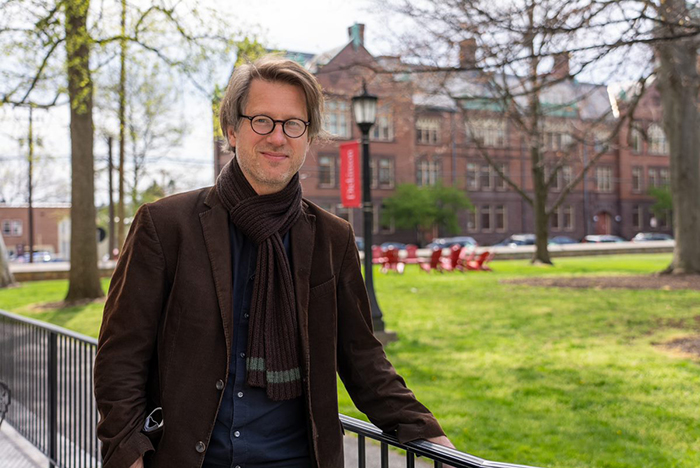 It’s not always easy to decode a poem—especially if it’s written in a language that’s not your native tongue. Now imagine the challenge of not only understanding but also translating said poetry—in a way that captures both the meaning and the artistry of the original.

That’s the task at hand this spring for Dickinson students taking part in the German department’s translation contest. Each one must translate a poem by an acclaimed German poet who’s serving an residency on campus. And, to add to the excitement, that poet, Jan Wagner, will be among those assessing the students’ contest entries. 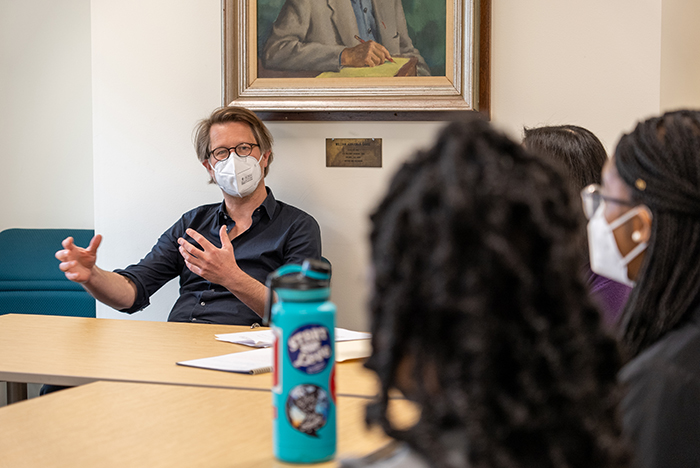 Jan Wagner works with students in a creative-writing class. Photo by Dan Loh.

Wagner is the recipient of numerous prestigious awards, including the Georg Büchner Prize, Germany’s highest literary honor, and the Leipzig Book Fair Prize, never before or since awarded to a poet. He’s also a poetry editor, literary critic, and essayist and translator of English-language poetry—so he knows well what challenges student-translators students face.

This spring marks Wagner’s second visit to campus, following Dickinson’s 2012 international poetry festival, through the Max Kade Writer-in-Residence program. Wagner’s current residency, sponsored by the German department and funded through the Max Kade Foundation, includes classroom visits with students studying creative writing, German and literature, all of whom have been studying his work.

And, after delivering a March 31 poetry reading on campus, Wagner will take part in a public panel discussion on poetry translation. All campus and community members are invited to attend.

All students are welcome to enter the translation competition. The translation-contest winner, to be announced April 22, will be given a volume of The Art of Topiary, an English-German selection of Wagner’s works, with German-to-English translations by David Keplinger. Keplinger will join Wagner during the noontime panel discussion on April 22, in Allison Hall.

Brendan Harlan ’22 (international studies, German), Abby Jones ’25 (undeclared) and Gabe McGough ’24 (law & policy, German) are among the students who’ve submitted translations to the poetry contest. They say the experience of translating German poetry has helped them better appreciate the beauty of the German language, as well as the beauty and meaning of the poems they’re working with.

That’s partly because, as McGough notes, poetry translation requires them to carefully consider the meanings and connotations of each and every word and also how that word relates to the theme of the text and how it’s used within the poetic framework. For example, Harlan, who’s taking two German classes this semester, found it particularly challenging to deliver an English translation that, like the original poem, rhymed.

“Jan’s poems are written to sound certain ways in German, rhythmically and rhyming-wise, so developing a rhythm and rhyme in English without losing any of the poem’s content or message is really difficult. But it’s also rewarding, as I figure out solutions. It also required me to explore my knowledge of English and my own vocabulary more than I expected to,” Harlan says.

Interacting with the poet and hearing him read the poem Harlan translated made the work easier, the student-translator notes, because he was able to figure out what the most important parts of the poem were to Wagner by noting the words that Wagner stressed.

Jones notes that the same was true for her—even though she didn’t have a chance to hear Wagner read the exact work she translated.

“Hearing him talk about poetry in general gave me insight into his relationship with his art, making it easier to decide which liberties to take in translating his poem as best I could,” Jones explains. “I was most concerned with maintaining the integrity of the poem, and hearing Wagner speak helped me to make decisions I thought might best represent something he would write if he wrote the poem in English.”