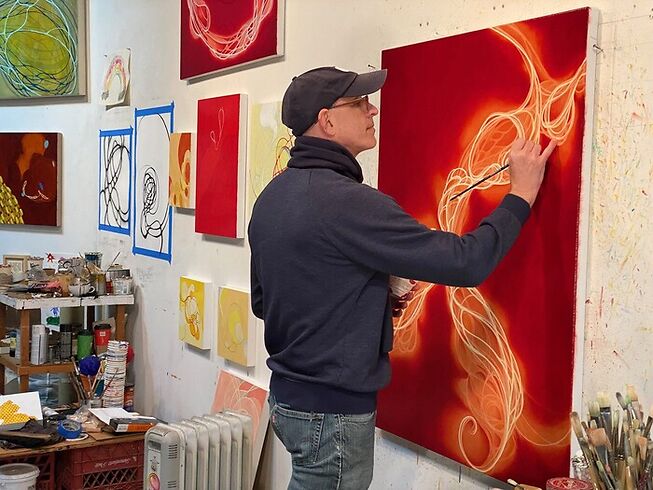 Interlace: Paintings by Michael Weiss '89 will be on exhibition March 30 through April 3, and also during the 2022 Alumni Weekend. Above, Weiss works in his studio.

Michael Weiss '89 to speak on campus in May, June

Michael Weiss ’89 came to Dickinson with plans to enter politics or the foreign service but soon realized that his true passion was for art. Now, he’s an educator—serving as the associate dean of fine arts at the Maryland Institute College of Art, where he’s been a faculty member since 2003—and a working artist who’s received grants from the Creative Baltimore Fund and the Maryland State Arts Council. His works are part of numerous private and corporate collections.

“There’s always something cooking,” Weiss says of his creative process, developing his paintings in multiple layers and over time. To allow time for those layers of oil paint to dry, he typically has several works in process at once.

You can see an exhibition of Weiss’ works at Dickinson, March 30 through April 30, 2022. Interlace: Paintings by Michael Weiss ’89 highlights art Weiss created during the past two years. Weiss will deliver informal remarks during the closing reception (May 4 at 5:30 p.m., Goodyear Gallery). The artist and educator will also work directly with senior studio-art majors while visiting campus.

And during the 2022 Alumni Weekend, Weiss will provide a guided tour of the exhibition. That talk will take place on Saturday, June 11, 11 a.m. to noon.

Below, Weiss shares memories of his time as a Dickinson student and highlights of his post-Dickinson life. He also discusses why he works continuously, as opposed to on a project-by-project basis.

Tell us a little about the work in the Dickinson exhibition.

I am a discipline-based artist, so I work continually and consistently, as opposed to creating new pieces on a project basis. That said, I will be showing mostly work that has been made during the pandemic, with a few older pieces as well. I will also give a guided tour of the exhibition during Alumni Weekend.

Do you hope to interact with students while on campus? If so, how?

Yes—I will be discussing studio work with current art department seniors during the day of the opening reception. I have worked as an educator since graduating Dickinson, so I am always appreciative of opportunities to work with students.

I began working in earnest as an artist while at Dickinson. In high school, I had taken some art classes, but I came to college thinking that my path lay in politics and/or foreign service. Having the ability to take a few art courses during my first year, along with a First-Year Seminar called the Creative Life, taught by Dennis Akin, then the chair of the art department and a studio faculty member, opened other doors for me.

There are many different ways of being an artist. For me, I appreciate the continuing inquiry and solitude that comes from being in the studio. The physical work allows for a simultaneous intellectual investigation that sends me buzzing. 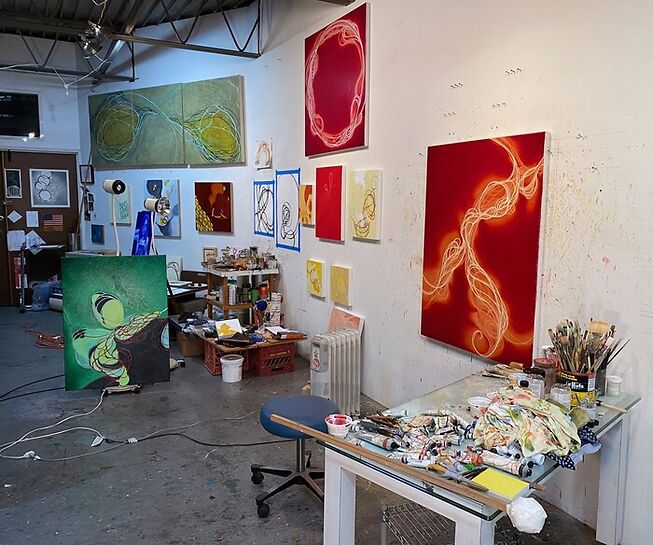 Where the magic happens.

As an artist, it is often difficult to progress in the face of the unknown. It is hard work that, for me, is generally conducted without regular feedback. It is an internal, rather than externalized process. There is not a specific pathway to follow—it is different for every individual. But that challenge is also one of the most rewarding aspects. In some ways, I just want to make a good painting. And then the trick is understanding what that means as you try to accomplish it.

Deep disciplinary knowledge is an important aspect of finding success in any field, but the notions of open inquiry and making connections across areas that I found at Dickinson still prove useful.

As an example, I am teaching a class this semester called Collage and Assemblage, and we have done some work researching and considering the historical beginnings of these modalities. As part of that, I spoke to my current students about the European and global contexts surrounding World War I that I first studied in an in-depth way during a course on that conflict taught by former Dickinson history professor John Osborne. The developments in art were part of greater societal upheavals and arose out of the complexities of the time, rather than in isolation. That recognition seems indicative of a liberal-arts education.

I spent a number of years working with the Mermaid Players in a variety of capacities. I was never interested in pursuing that beyond college, but I met great people and was able to learn a great deal through that participation.

Too many to name one. I have a group of five friends with whom I am still in regular touch, and we share many great memories.

Tell us a little about your studies abroad as a Dickinson student.

I went to London through Syracuse University during the fall of my senior year (1988). Study abroad is life-changing for most participants in in many ways, and it was something of a crystallizing moment for me. A number of students on the Syracuse program were killed in the Pan Am 103 bombing on Dec. 21, 1988. It was a particularly important event on a global and personal level that I still frequently think about. But on a more positive note, I met my spouse during that semester, and we have been together since that time.

What’s something unforgettable that you’ve done since you graduated?

Traveling to France and Italy with my family to visit my brother’s family.

I give a contribution to the college every year to support the art department and The Trout Gallery. I recognize the importance of demonstrating my appreciation for my years at Dickinson in at least a small way, and of supporting current and future students.

Learn more about Interlace: Paintings by Michael Weiss '89—and all of the spring 2022 art exhibitions—through the current Calendar of Arts.