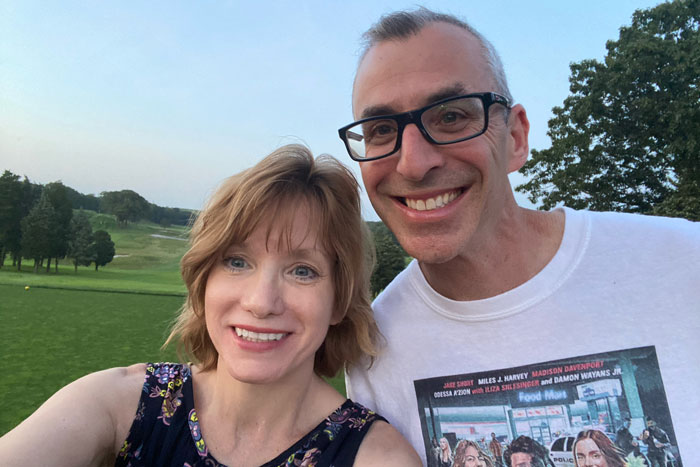 Eric '92 and Patricia Goran, with Eric sporting a T-shirt from their film 'Supercool,' released in February on Amazon Prime Video.

With his debut film streaming on Amazon Prime Video, the NYC high school history teacher is writing (and producing) his own story

Goren, his coproducer wife Patricia and their film will be coming to campus Wendesday, April 20, for a screening and discussion at Althouse 106 at 7 p.m.

Back in 2006 or so, Eric Goren ’92 and his wife, Patricia, were eating pizza in a quiet Long Island restaurant. They talked about being teachers, about being high school students themselves years ago, about those ’80s high school movies John Hughes wrote to make the world fall in love with him.

Then the conversation turned, and they talked about doing something new, about breaking their routines and moving beyond the strictures of a high school curriculum. But what, and how?

Then the idea came, and it turns out it was there all along: What if they wrote a screenplay? A movie about high school, inspired by life and filtered through their love of those ’80s movies that became such cultural touchstones.

“We were talking about different experiences we had in high school and different experiences we had as teachers, and we came up with a plot outline for Supercool,” says Eric, noting that at first it was called The Science of Cool and they sketched out the story on napkins right there and then between bites of pizza. Inspired by such films as Ferris Bueller’s Day Off, The Breakfast Club and Revenge of the Nerds—the main character in Supercool is named after Anthony Edwards’ “Gilbert”—the Gorens went for it. “We didn't know how to write a screenplay. But we wrote it in five days. It just flowed right out of us.”

While the Gorens didn’t know how to write a screenplay, they learned, honing their craft and turning The Science of Cool into Supercool, a story about a high-schooler who wishes at the lucky time of 11:11 that he could be cool and then lives out an epic night of coolness when the wish comes true. And then, as Eric puts it, he wore out the send button in Gmail trying to pitch his idea to anyone in the industry who might be receptive.

“I probably sent, I'm not kidding, 150,000 emails out over the years, and I probably made 10,000 calls,” says Eric, recounting trips off to California, meetings with investors in North Carolina—all of which left him empty-handed. So he continued his search for a production company, and in 2016 he queried a Finnish company called Yellow Films—who he’d never heard of—and sent them the usual query email.

Not too long after, the company asked to read the script and loved it when they did. And before the Gorens knew what hit them, the CEO of Yellow Films came to New York and bought it, signing Eric and Patricia on as executive producers.

“I hit this company up at the right time with the perfect email,” Eric says, remembering that Yellow Films was looking to break into the American market with, as luck would have it, a teen coming-of-age comedy. “We got very lucky. I made the 11:11 wish that came true.”

Teaching and Writing and Producing

So now it’s easy to wonder how NYC teachers have the time and energy to write and produce a film, all the way through to release (which Supercool did in February, on Amazon Prime). After all, it’s hard enough to finish a screenplay and get a company interested in it. It’s a whole extra marathon to run as an executive producer, a role that requires enormous amounts of time and relentless passion. 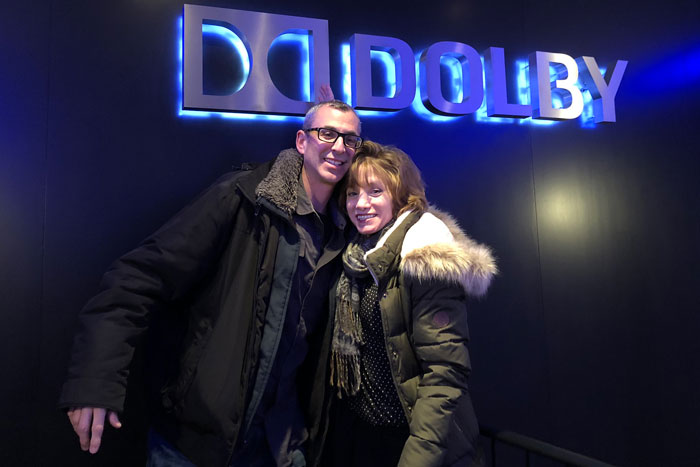 Eric ’92 and Patricia Goren at the 'Supercool' premiere in New York City.

“You have to keep pushing and persevering,” Eric says, noting that he doesn’t have a staff or company backing him, and while Patricia keeps writing, she’s taken a step back from producing. “I'm working 24/7, coming up with concepts, trying to package film projects. Because if you really want it to happen, you're gonna do it.”

And he’s doing it, with two more films currently in the preproduction pipeline: Generation Angst, a gritty story of heroin addiction; and Growing Up Gorman, a coming-of-age film about a teen musician’s plan to win a battle of the bands competition to impress a girl. Growing Up Gorman is another script born of Eric’s teen years, and as his writing shows, he’s always eager to connect with his past.

“Dickinson was a hell of an experience,” says the former history and political science major, although he clearly remembers an early English professor being a tough critic of, ironically, his writing. “I got a very good education there, and I made some really good friends at Dickinson—real lifelong friends.”

Dickinson inspired Eric to write a script, in fact, one loosely based on some of his college experiences. It was one of his first, and it’s still in a folder somewhere on his computer. With Supercool now out, it’s easy to look back at the scripts he’s written that might not have been ready for an audience. But he’s clear on how anyone looking to succeed in the business need to approach it.

“You can't wait around for other people to do it for you,” he says. “It won't happen. It never will. If I waited for all the promises people made for me, I'd still have the Supercool script on my computer without anything to show for it.”

He certainly has something to show for it now. Literally.