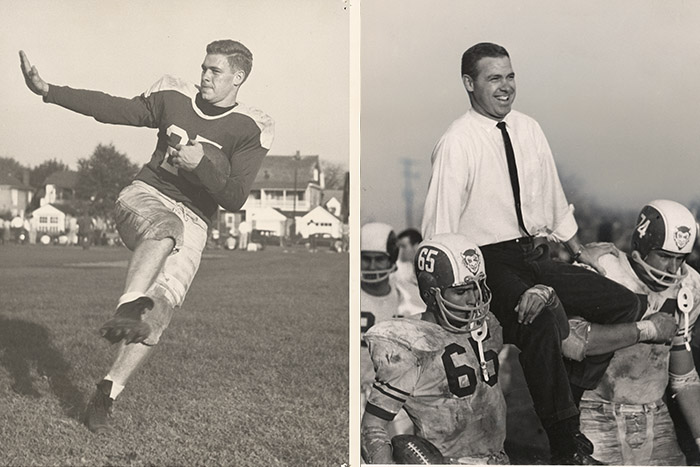 During his 33 years at Dickinson, Coach Wilbur “Goby” Gobrecht ’52, P’84, P’87, led and inspired roughly 1,000 student-athletes and still more phys-ed students. Many still recall—and heed—the lessons they learned from him, on and off the field. It’s why we call him “Mr. Red Devil.” And why, in the weeks after more than 50 of his former students and colleagues gathered on Biddle Field for an Alumni Weekend event in his honor, we’re taking a closer look at Coach Goby’s distinctively Dickinsonian life.

Goby was already a trailblazer at age 17, when he began his first year at Dickinson, declared a history major and joined the Red Devils football, basketball and track and field teams. “I came from a family of musicians—sports wasn’t what we did in my family,” he recalls. “But it’s what I loved.”

A 10-letter, all-conference, tri-sport athlete who was listed in Who’s Who Among Students in American Universities and Colleges, Goby earned back-to-back McAndrews Awards in 1951 and ’52. After scoring five touchdowns in a single game during his junior year, he earned all-state and Little All-America honors for rushing, receiving and passing.

Many of his football teammates were World War II vets, attending college on the GI Bill, so Goby connected with students his own age through extracurriculars. He was tapped into Raven’s Claw and served as class treasurer, D Club president and vice president of Alpha Chi Rho. Goby joined the Marines after graduation and played basketball for his battalion. Next, he taught and coached high schoolers for a few years and earned a master’s in education at Duke University.

Then, in 1960—just five years after brother Lewis ’55’s graduation—Goby returned to his alma mater, this time as assistant coach for Red Devils football and basketball, assistant for track and field and associate professor of phys ed. Four years later, he was additionally named head lacrosse coach. He was promoted to head football coach in 1965, and that same year his Dickinson team joined the U.S. Intercollegiate Lacrosse Association.

Two football upsets under Goby’s watch are now the stuff of Dickinson legend. Prior to the Red Devils’ Oct. 9, 1976, game against the Widener Pioneers, the late Skip Hutter, sportswriter for the Harrisburg Patriot and Evening News, predicted that Dickinson would lose by eight points. But the underdogs prevailed—and brought home Goby’s 50th intercollegiate win in the process. Two years later, Dickinson turned the tables on longtime football rival Gettysburg; after a 25-year stretch with Gettysburg as the dominant team, Dickinson won its first Little Brown Bucket trophy.

The former Dickinson history major has also published six volumes on Dickinson sports history, beginning with the first of his two books on Red Devils football, published in 1969. He also wrote a book about his family’s history, tracing it to the 1700s.

Goby was inducted into Dickinson’s Athletics Hall of Fame in 1976. He coached football and lacrosse until 1979, after which he focused solely on lacrosse (although in 1984, he helped out as interim football coach and logged a then-record 52nd win, when the Devils beat Georgetown 27-7). He retired in 1993.

The Gobrechts say that, while they’ve long noted the role Dickinson has played in their lives, they were overwhelmed to learn during the Alumni Weekend event the extent of the role Goby has played at Dickinson.

“People told us that he influenced them not only as students but that they carried the things they learned through him with them into their adult lives and careers,” Marcia says.

That’s old news to Goby’s former student-athletes like John Heath ’71, who played lacrosse under Goby’s guidance for 10 years, helped him out as assistant volunteer coach in the late ’80s and provided much of the sports history for this article.

“There’s only one Goby, and he’s known for his enduring relationships with many former players,” Heath says. “Goby taught us a lot about sportsmanship, teamwork and leadership, lessons that have served us well since our playing days.”

“Goby personified what a good coach at Dickinson should be, in that he didn’t just concentrate on mechanics but was a mentor and taught student-athletes about life,” added interim President John E. Jones III ’77, P’11, who saw Goby’s influence manifest in the experiences of classmates and friends, on and off the Dickinson field. “His legacy is spectacular, and his impact is immeasurable.”