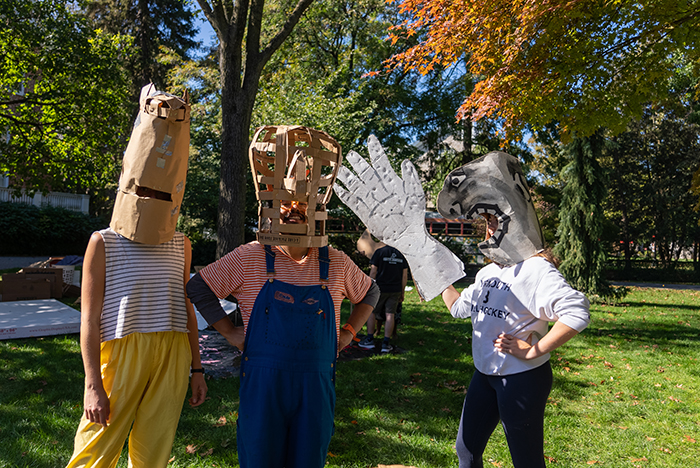 Dickinson livestock are sharing their home with some curious visitors this week. And it’s anyone’s guess what they’re thinking as giant horse puppets dance and parade across College Farm grounds.

It’s all part of Bread and Puppet Theater’s multiday artistic residency at Dickinson, which culminates with a circus-style outdoor performance at the College Farm. The 4 p.m. performances on Saturday, Oct. 23, and Sunday, Oct. 24, are open to the public. Tickets are free but must be reserved in advance. 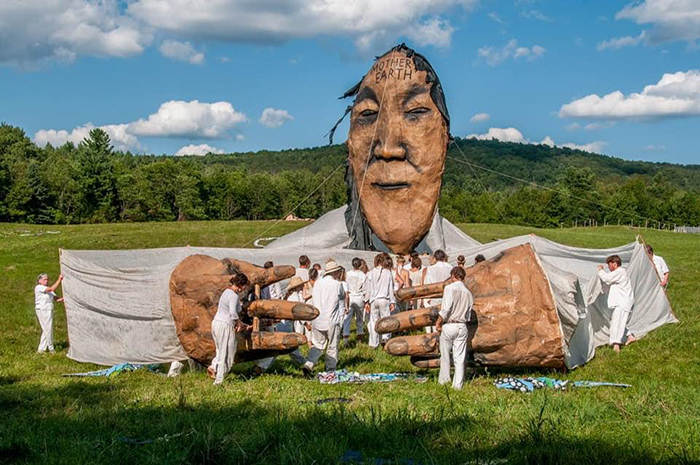 Photo of a past performance by Randy McMahon.

Founded by Peter and Elka Schumann in New York’s Lower East Side in 1963, Bread and Puppet is an off-off Broadway institution and one of the oldest nonprofit political theatres in the United States. Community members are encouraged to take part in Bread and Puppet festivals, protest-parades and performances, which combine spectacle, entertainment and sociopolitical commentary to create an immersive and thought-provoking experience. During the Vietnam War era, the troupe staged large-scale protest processions and pageants, and from 1974 to 1998, it was well-known for hosting a two-day outdoor festival at its home base in Vermont.

Today, Bread and Puppet continues to perform circus-style performances in Vermont during the summer and also presents traveling shows and street protests across the country and the globe. The Bread and Puppet bus returns to Dickinson this month by popular demand, after serving an artistic residency at Dickinson in 2016. A planned March 20 appearance at Dickinson was canceled due to the U.S. outbreak of the coronavirus pandemic. 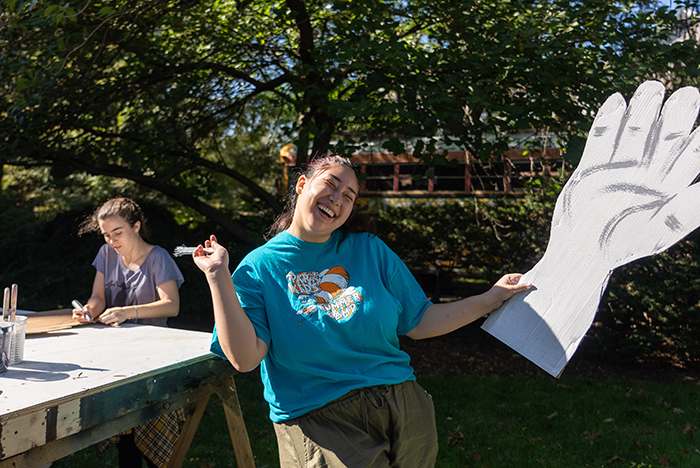 Dickinsonians will take part in the Oct. 23 and Oct. 24 performances. Photo by Dan Loh.

Since arriving on campus Oct. 20, the troupe has been working with faculty and students involved with theatre at Dickinson. Wednesday began with a mask-making session and continued with a presentation on picture-stories as political street performance. The mask- and music-making continued Thursday and Friday. Both experienced and novice Dickinsonian performers and social activists are invited to take part in the social-justice and politically themed weekend performance-celebrations. Highlights include those fanciful dancing horses and the strains of the Doing the Best We Can Band.

The Dickinson College Arts Award will be presented to Bread and Puppet after the Saturday performance. Endowed in 1959 by Dickinson’s Board of Trustees, the award honors an individual or group's outstanding contribution to the creative or performing arts. 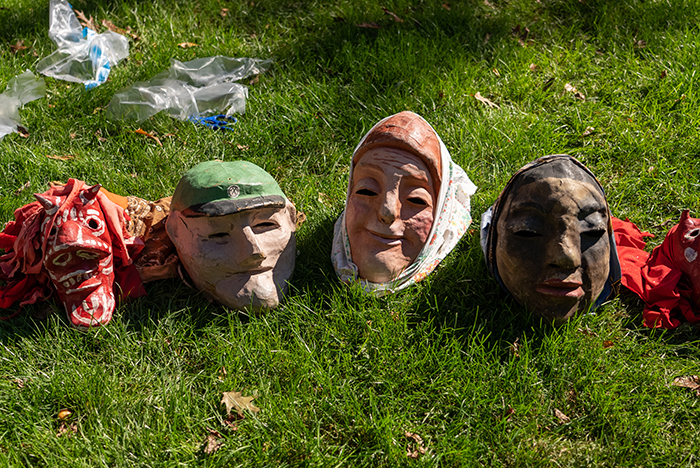 No, those aren't peasant-zombies, rising up from the Earth. They're puppet heads, soaking up the ambiance at the College Farm. Photo by Dan Loh.

The College Farm is seven miles from campus, at 553 Park Drive, Boiling Springs, Pennsylvania. Dickinson’s Department of Theatre & Dance will provide a shuttle bus to the farm prior to each performance. Buses will depart from the ATS parking lot at 3:30 p.m. on both days, and will depart the farm at 7:30 and 8 p.m. on Saturday, and at roughly 5:45 on Sunday. Bread and Puppet's famed sourdough bread will be served after the shows.

Reserve tickets for this production and view more public arts events via Dickinson’s Calendar of Arts.