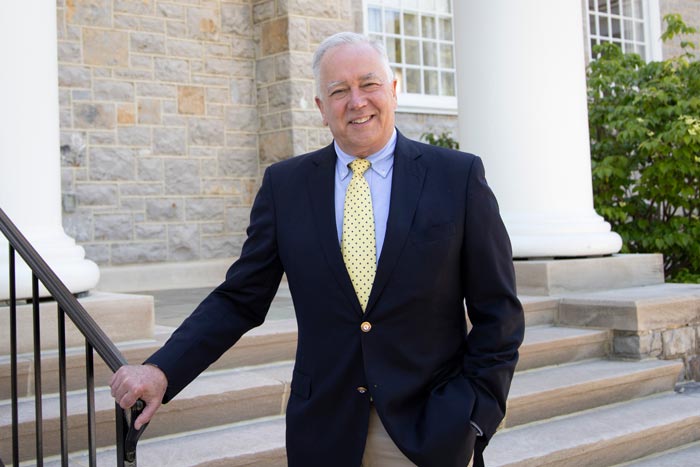 Dickinson College interim President John E. Jones III '77, P'11 will join a panel of legal experts discussing how the courts can respond to and prevent acts of extremism. Their conversation, “Improving the Ability of the Judicial System to Address Extremism,” will take place Monday, Oct. 18, from 4:45 to 5:45 p.m. at the Eradicate Hate Global Summit in Pittsburgh. The summit will be streamed online. Registration is required.

The session will address how risk factors for extremism can inform charging and sentencing; new court structures that can facilitate the effective disposition of hate-crime cases; procedures that can reduce recidivism and provide greater support for victim families; the pros and cons of using predictive analytics for sentencing; and more.

Jones will be joined on the panel by former Pennsylvania Governor Tom Corbett, who will serve as moderator; activist Richard Collins; Chief Judge John Tunheim of the U.S. District Court of Minnesota; Arusha Gordon, associate director of the James Byrd Jr. Center to Stop Hate, Lawyers’ Committee for Civil Rights Under Law; and Ann Claire Williams, of counsel at international law firm Jones Day and former judge in the U.S. Northern District Court of Illinois.

Prior to his appointment in the summer of 2021 to lead his alma mater, Jones was chief judge of the U.S. Middle District Court of Pennsylvania. He has presided over a number of high-profile cases, including the landmark case of Kitzmiller v. Dover School District, after which he held that it was unconstitutional to teach intelligent design within a public school science curriculum. He also resolved the matter of Whitewood v. Wolf by striking down as unconstitutional Pennsylvania’s ban on same-sex marriage. Jones co-chaired Pennsylvania Governor-elect Tom Ridge’s transition team and served as chair of the Pennsylvania Liquor Control Board. Jones has received numerous accolades during his career. In 2006, Time magazine named him as one of its Time 100 most influential people in the world. He was the recipient of the first John Marshall Judicial Independence Award given by the Pennsylvania Bar Association. He also received the Geological Society of America’s President’s Medal and was inducted into the George Washington Spirit Society.

The Eradicate Hate Global Summit grew from the deadliest anti-Semitic attack in U.S. history. In October 2018, a gunman massacred worshipers at Pittsburgh’s Tree of Life Synagogue. For the past three years, the Eradicate Hate organizers have committed to use that tragedy as the impetus to create the world’s most effectively coordinated offensive against hate and extremism. The summit will bring together experts from government, academia, law, the nonprofit sector, corporations and journalism to discuss and actively work toward effective strategies to globally eradicate violent acts spawned by hate. The summit will not only search for effective tools to combat anti-Semitism, but also racist, ethnic, political and cultural hate, as well as hate targeting the LBGTQ communities and other religions. The agenda is available online.