'Now Is Your Moment' 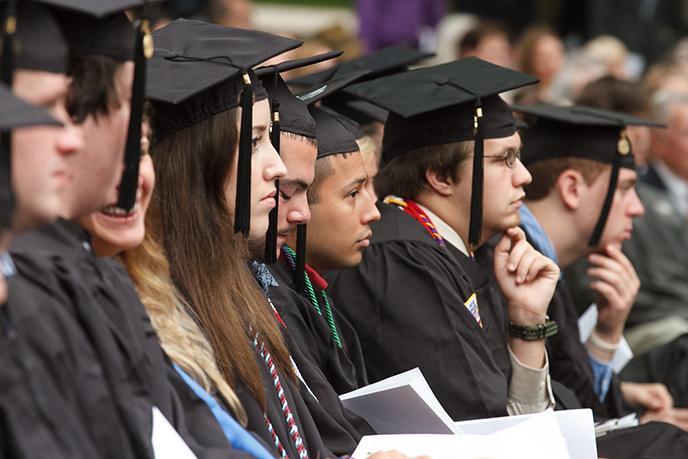 Although occasional drizzle drove gathered friends, family and graduates to seek shelter under umbrellas and rain ponchos, the 2013 Commencement ceremony went off as planned Sunday, as the Dickinson community came together to celebrate the 526 graduating members of the class of 2013.


At 10 a.m. sharp, in front of Old West on the John Dickinson Campus, President William G. Durden '71 took to the dais to deliver his remarks, marking the final time he will do so as president of the college.

"To the class of 2013: Go forth and engage the world. It lies directly before you. In fact, you already carry it within you," Durden told the graduates. "Although this will be my last commencement as president, I will always be a Dickinsonian and an alumnus of this institution, just like you. I hope you will treasure this distinction as much as I."

At the conclusion of Durden's speech, several honorary degrees were bestowed:

After accepting his degree from Professor of Art History Melinda Schlitt, Levy delivered the Commencement address, which included some words for President Durden.

"By all accounts, Bill, you have enjoyed an extraordinary tenure, rich in Dickinson accomplishments," Levy began. "You led Dickinson with distinction. You have moved it from strength to strength."

Once the standing ovation came to an end, Levy continued, his remarks directed at the senior class.

"If you are intellectually curious, highly motivated and willing to take risks, there is not a better place to be than in America to find very satisfying and rewarding work," he said. "Dickinson has prepared you for it. Of that I am certain. ... Now is your moment."

Also awarded under the cloudy skies was the second annual Sam Rose '58 and Julie Walters Prize at Dickinson College for Global Environmental Activism, which went to Lisa P. Jackson, former administrator of the Environmental Protection Agency.

"Thank you for the joy of knowing that I'm here a year after Bill McKibben, a dear friend," Jackson said, noting the responsibility given to her in receiving an award in the name of environmental activism. "I believe activism is the most fundamental responsibility and privilege of democratic society."

Wrapping up the awards, President Durden presented the James Fowler Rusling Award to Rebecca Thompson (chemistry and mathematics) for scholarly achievement, the John Patton Memorial Prize to Christina Socci (English) for high scholastic standing and the William H. Hufstader Senior Prizes, given to the senior man and woman who contributed most to the college, to Andrew Chesley (economics and mathematics) and Giovania Tiarachristie (sociology).

Jennifer Ward Reynolds '77, chair of the Board of Trustees, then announced Chesley as the elected young alumni trustee before the degrees were at last conferred to the 526 graduates of the class of 2013.

Overall, three graduates received Fulbrights, three accepted positions with Teach for America and three received their commission into the U.S. Army as 2nd lieutenants, and winners of a Rotary grant and Soros Fellowship also were among the graduating class. Twenty-one foreign countries and 31 states were represented in the ranks of graduates, and more than 55 percent studied abroad while at Dickinson.