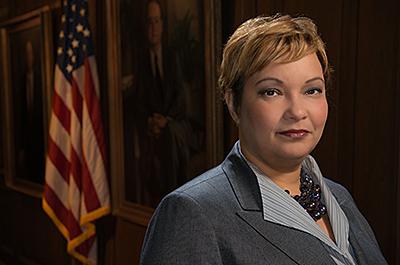 Lisa Jackson, former administrator of the Environmental Protection Agency (EPA), has been selected to receive The Sam Rose '58 and Julie Walters Prize at Dickinson College for Global Environmental Activism. The prize will be presented at Commencement on Sunday, May 19.

Jackson led the EPA under the Obama administration from 2009 - 2013 and focused on core issues of protecting air and water quality; preventing exposure to toxic contamination; and reducing greenhouse gases. The first African American to hold the post, Jackson also focused on vulnerable groups including children, the elderly and low-income communities that are particularly susceptible to environmental and health threats.

She was named one of Newsweek's Most Important People in 2010; was featured on Time magazine's 2010 and 2011 lists of the 100 Most Influential People in the World; was listed in Essence magazine's 40 Women Who Have Influenced the World; was profiled in O magazine for her work to protect the nation's air, water and land from pollution that threatens human health.

The annual Rose-Walters prize of $100,000 includes a short residency and a public lecture delivered by the recipient. The prize was gifted in 2012 by alumnus Sam Rose, class of 1958, and his wife, Julie Walters, to focus attention on the need to reduce the impact of human lives on the planet, in the face of rising population predictions for this century. As longtime supporters of the Natural Resource Defense Council (NRDC), Rose and Walters endowed the prize to honor NRDC co-founder John H. Adams and his 40 years of dedication and service to environmental causes.

Rose, a real-estate developer and attorney, was a member of the 1958 Dickinson lacrosse team that made college history when it won Dickinson's first and only national title. A founding partner of Greenebaum & Rose Associates, he has more than 40 years of experience in commercial development, primarily in the Washington, D.C., metropolitan area. Rose also serves as vice chair at the Smithsonian American Art Museum, and he and Walters are members of Dickinson's Founders' Society.

An emeritus trustee of Dickinson, in 2001 he established the Samuel G. Rose '58 Scholarship at Dickinson for economically disadvantaged students. In 2012, Rose and Walters gifted Dickinson with $6 million to construct the Durden Athletic Training Center at Biddle Field in honor of retiring president William G. Durden '71 and his wife Dr. Elke Durden.

Jackson follows environmental activist, author and journalist Bill McKibben, who received the inaugural Rose-Walters prize in 2012. McKibben's two-day campus residency begins April 10, when he will participate in classroom discussions and meet with various campus groups, including student and faculty sustainability leaders. His residency culminates in a public lecture and book signing, on Thursday, April 11 at 7 p.m. in the Anita Tuvin Schlechter (ATS) Auditorium. Jackson's residency and lecture will be announced at a later date.