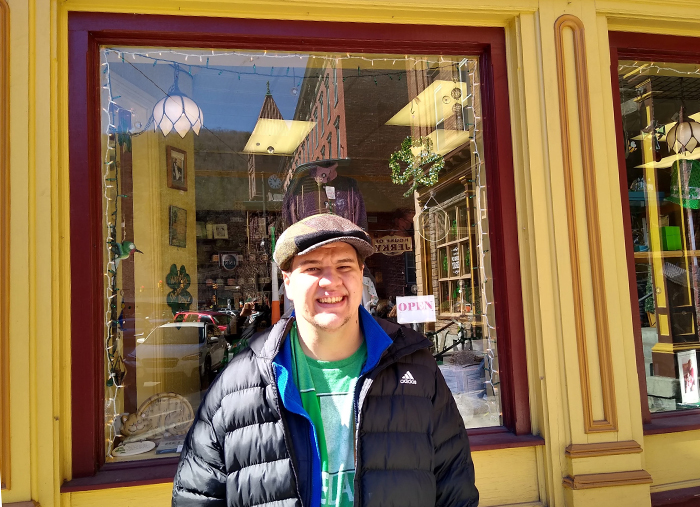 Xander Danielson ’23 loves to learn languages—and he’s a gold medalist in the Western Pennsylvania Olympiada of Spoken Russian competition. Below, he discusses what drew him to Dickinson, recalls his experiences Zooming with students in Russia and more.

Easton, Pennsylvania, but I was born in Lima, Peru.

The faculty are exceptional. They set Dickinson apart from other colleges.

Heart of A Dog by Mikhail Bulgakov.

I had chosen another university, where I received a large scholarship to major in Russian. Then I was accepted at Dickinson, visited the campus, met Associate Professor of Russian Alyssa DeBlasio—and I immediately changed my mind and my plans.

Writing papers for Professor of History Karl Qualls’ Russian history class. When I am an old man, sitting in my rocker, and somebody asks about my college experience, I will tell them how I learned to write.

… Tolstoy. I have read so much of his work during the past three semesters. I have so many questions, and I need answers.

I earned an A in International Relations, so I know not to answer this question. I have been fortunate to have exceptional professors during my time at Dickinson. They went above and beyond during the era of Zoom.

Maybe join the Peace Corps or USAID. I want to help people in developing countries.

I have a huge national and huge international flag collection. I am familiar with the flags and capitals of every country.

The only class I ever missed was a Russian 102 lab.

The best thing about my Dickinson experience will be returning to campus after one-and-a-half years of being exiled by COVID. I lost 50 pounds on a steady diet of Zoom.

On living, studying and traveling internationally:

I studied Russian for two consecutive summer courses with students from The Russian Higher School of Economics and the Russian State University of Humanities. As a middle schooler, I spent four years in an international school in Dushanbe, Tajikistan. The highlight was making a public-service announcement, with my younger brother, about wearing masks. We spoke in Russian. He will now attend Dickinson.