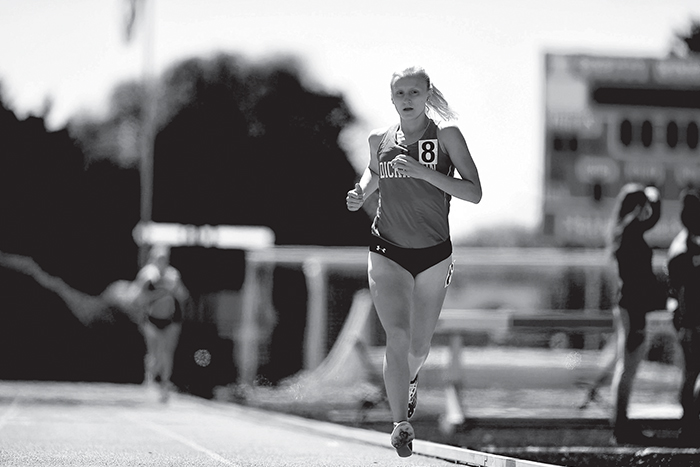 Isabel Cardi ’22 has been a rock star as a Red Devil track and field/cross-country athlete, competing at nationals every year, breaking records and generally burying the competition. But it almost didn’t happen, as Cardi started her college career at another school, transferring to Dickinson as a sophomore.

“I chose Dickinson because I really wanted a smaller liberal-arts school, … [and] after touring campus and meeting with Coach [Don] Nichter, I felt that Dickinson would be a great fit academically and athletically,” says the biology major, who hails from Media, Pa. “Coming in as a transfer, I was a little nervous about joining a new team, but my teammates and the coaching staff made me feel so welcome. The team atmosphere is positive and supportive, and the drive of my teammates to be their best is very motivating.”

It’s hard to know where to begin listing Cardi’s accomplishments, but it’s easy to start by saying that she holds multiple records in both cross country and track and has several All-America and academic honors. As far as Division III runners go, she was second in the nation in 2020, closing in on a real shot at a national championship, when the pandemic shut down the sport just hours before the determining race. When the 2021 national championships were held in May, though, Cardi took third place in the 5,000 meters, closing out the season on a big high note. And as might be expected, she’s a dream to coach.

“Isabel is a very special student-athlete,” says Nichter, noting that Cardi’s skill set has carried her successfully through a wide range of events, from the 1,500 meters on the track to 6,000 meters on the cross-country course. “Her racing success is a result of this willingness to ‘do the work’ in training and her instinctual ability to establish a proper sense of pace in her racing strategy.”

Nichter says that despite transferring into Dickinson and then missing another two seasons because of COVID, Cardi will still finish her collegiate career as one of the best in Dickinson cross-country and track and field history.

In Centennial Conference (CC) competition, Cardi has been exceptional: She’s an 11-time place-winner, an eight-time All-Conference Performer, Track Athlete of the Year (2020) and three-time Athlete of the Week. She also holds two Dickinson records, in the 3,000 (indoor) and 5,000 (outdoor) events and took first place in the indoor distance medley relay in 2019 and the 3,000 in 2020 and the 5,000 outdoor in 2021.

“There are a lot of things that I love about running,” Cardi says, citing the stream of support from teammates, who she says always push her to do her best. “I love the structure of the sport and the self-discipline it requires, and these two attributes positively carry over into other aspects of my life.”

“I love how strong and empowered I feel while I’m running,” Cardi says. “The feeling after finishing a hard workout or race is hard to beat.”

And because she delayed graduation by taking time off during the pandemic, she’ll have another season to capture that feeling and challenge the records, and herself, once again.