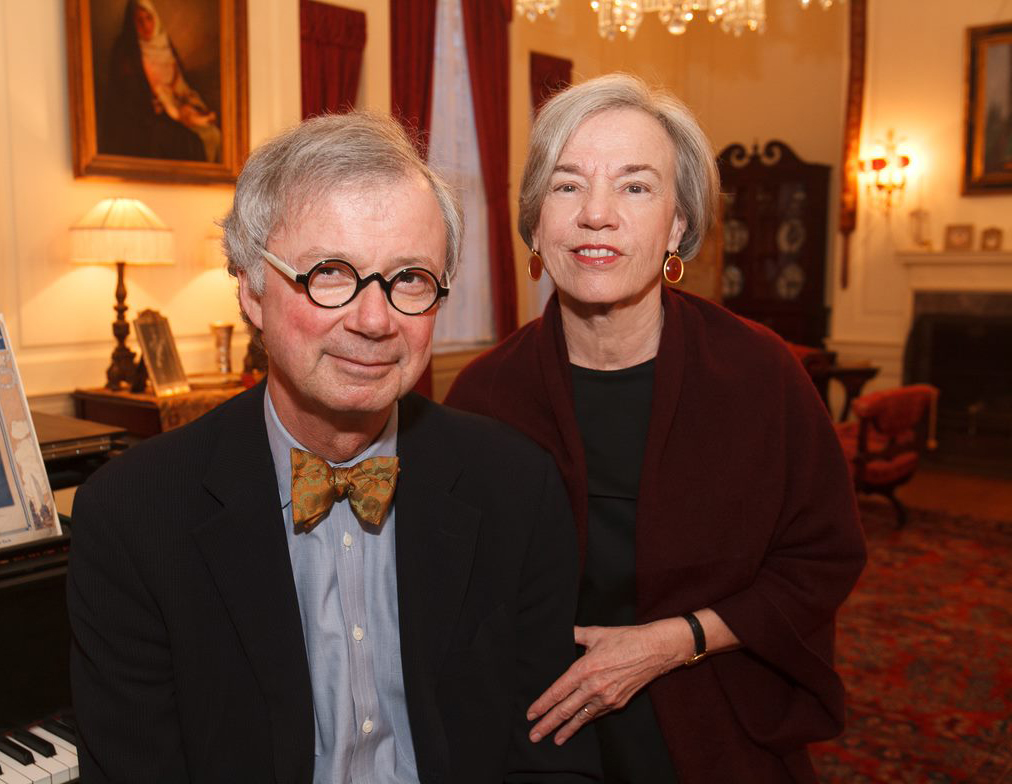 Visiting a café in Madison Square Park, Bill '71 and Elke Durden were seated next to two longtime New Yorkers, deep in animated conversation. The Durdens couldn’t help but overhear. “It was fascinating—it was what I’d characterize as a quintessential New York conversation,” says Bill. “It gave real insight to their minds.”

The Durdens have actively sought out just those sorts of cultural lightbulbs in places all over the world. And it helps explain why, eight years after his Dickinson presidency, and for the 50th anniversary of Bill’s graduation from Dickinson, they’re working to ensure that more Dickinson students enjoy similar opportunities to engage the world.

Living what they learn

As a first-generation college student at Dickinson, Bill declared a double major in philosophy and German. While studying abroad for a year in Germany, he launched a lifelong habit of visiting bookstores and cafes the world over—places teeming with culture, conversation and cultural insights he’d drink in—and then carefully considering the lessons learned.

“What was impressed on me when I was a Dickinson student was that that global education is essential; it is absolutely integral to the Dickinson education, and it is about much more than simply visiting new places,” says Bill. “It’s not enough to simply see the other. You need to change as a result of these experiences, and you then need to begin to apply what you’ve learned to your own life. It can be as mundane as changing what you eat for breakfast, or what time you eat it. And it can be as profound as altering your worldview.”

With encouragement from mentor and professor Dieter Rollfinke, Bill applied for and was granted a Fulbright award. After serving as a Fulbright scholar at the University of Basel, Switzerland, he enrolled in an M.A./Ph.D. program at Johns Hopkins University.

There, he met a fellow German Ph.D. student who’d emigrated to the U.S. with her family in 1954. Elke was equally passionate about the study of international languages and cultures, and about the need to cultivate a global sensibility and curiosity in a new generation of learners.

“I think a global mindset is in our DNA,” says Elke. “Because of our experiences, it’s just how we see the world.”

When Bill was named Dickinson’s 27th president in 1999, he was already a recognized global-education leader and educator who’d served as senior education consultant to the U.S. Department of State. And Elke had already taught German at Dickinson and had seen the power of global education for young Dickinsonians.

During Bill’s presidency, Elke continued to teach at Dickinson, and the Durdens connected with Dickinsonians all over the world and welcomed international teaching assistants, scholars and dignitaries to campus.

Dickinson’s global-education programs and Dickinson’s international student and international assistant population grew exponentially. The college’s national reputation and its standing as a top college for study-abroad was strengthened, and Dickinson launched admissions efforts in new corners of the world to increase global diversity on campus. Dickinson also began to offer increased options for hands-on learning abroad through global Mosaics and study-abroad internships, volunteerism and research.

The Durdens have supported Dickinson for many years, and in 2008, they became Old West Society members when they included Dickinson in their estate plans. They also annually support faculty seminars and fund a writer’s series at the Durden Bremen Center to introduce study-abroad students to the works of emerging writers, and they established a scholarship in memory of his parents, William and Ruth. At his retirement in 2013, the William G. and Elke F. Durden International Initiatives Fund was established in their honor.

And last March, the Durdens announced their legacy support of scholarships and Dickinson’s global programs. Half of their legacy gift provides for the Durden Scholarship, and half supports the Durden International Initiatives Fund, allowing future generations of Dickinsonians to deepen their academic and cultural experiences abroad.

As their most recent gift indicates, they look with optimism and excitement to Dickinson’s continued successes ahead, and the central role of global education in that work. “We think of the gift as an affirmation,” Elke explains. “Our 14 years together at Dickinson, during Bill’s presidency, really enriched our lives, and Dickinson remains an integral part of our lives.”

The Durden Scholarship amplifies that enriching experience in the lives of recipients such as Keziah Groth-Tuft ’17, and in the world that benefits from their work.

“Scholarships allow prospective Dickinsonians to choose a school based on fit, without being limited by their ability to pay,” Groth-Tuft says. “I believe choosing Dickinson is one of the best choices I will make in my life, and the opportunity was possible thanks to donors like the Durdens.”

"We also see it as an affirmation of our good friend and Dickinson’s interim President John Jones,” Bill adds. “We know there’s much good work ahead during challenging times. We have confidence that he and Beth are the right team for Dickinson at the right time.”