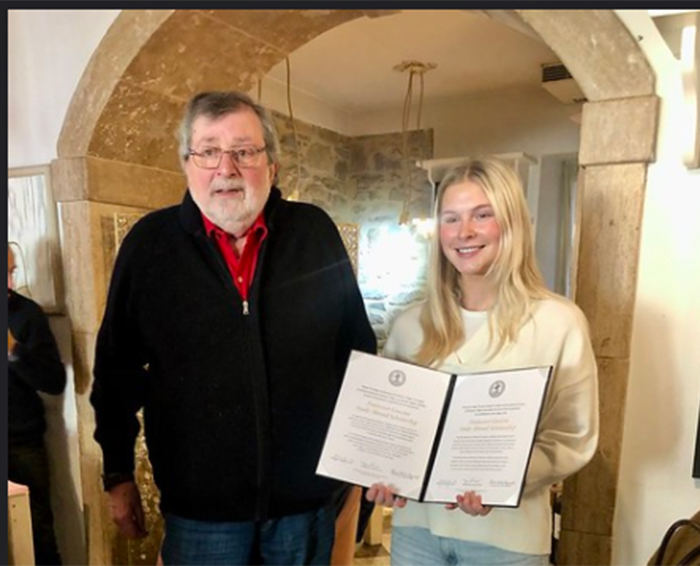 Alumni who’ve studied abroad know just how transformative a culturally immersive experience can be. A new scholarship, established by Dickinsonians who studied abroad in Bologna in the 1960s, '70s and '80s makes those experiences possible for more current and future students. It also pays tribute to a high-profile educator who inspired a lifelong zest for learning, traveling and living. 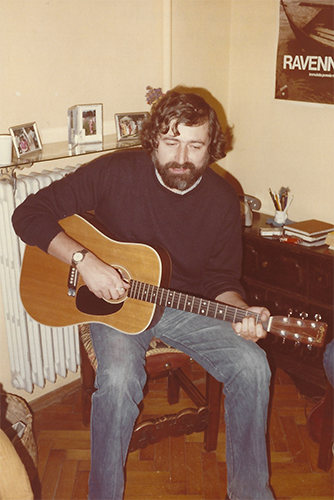 Guccini performs in the Dickinson Center.

That man is Francesco Guccini, and his dual career as a famed singer-songwriter and Dickinson global-education professor has inspired several generations of Italian music fans and Dickinsonians alike. Just a little over a year after his fellow students established a Dickinson scholarship in his honor, he met with the first Guccini Scholarship recipient, now studying abroad in Bologna.

A teacher and a star

Nicknamed the “Bob Dylan of Italy,” Guccini is one of the most important Italian singer-songwriters of the current era. Educated in Bologna, he named his most famous record album after the Bologna street where he grew up, and he lived there for much of his adult life. Along with commercial success, Guccini has enjoyed widespread acclaim for his fierce and poetic lyrics, which convey his commitment to social justice and his steadfastly progressive ideals.

But before he was a star, Guccini was a contributing founder of Dickinson’s flagship study-abroad program. He taught Dickinson students in Bologna for several decades, beginning in 1965—three years before his debut album. And he continued to teach Dickinson students in Bologna for another decade—pausing his skyrocketing music career one month each year to lead the Bologna program’s intensive four-week introductory course. He retired from that post in 1985.

During his years with the Dickinson in Italy program, Guccini “helped countless students bridge the cultural divide upon their arrival to the city,” Michael Nilsson ’83, son of Dickinson’s study-abroad founding director, said, speaking directly to Guccini during a Zoom reunion with fellow alumni. “You have such extraordinary knowledge, presence and energy, and you were unselfish in giving those gifts to others.”

Guccini’s former students recall him as an animated and inspiring instructor who chain-smoked in class and dispensed life lessons, such as the need to respond positively to adversity. Guccini also shared his passions for justice, for learning, for Bologna and for the arts.

“The song ‘Vedendi Santo’ always brings back Bologna,” said Faith Thompson Campbell ’68, who learned the difference between “volare” to “volere” thanks to Guccini’s spirited lectures. Campbell still keeps Guccini’s first album, as well as his three-disc, greatest-hits compilation. And two years after studying in Bologna, she ran into Guccini by chance while visiting the city, and was pleased to discover he remembered her.

Guccini visited Dickinson’s campus a few times in the 1980s and remained in touch with several Bologna-program alumni, including Tony Elms, who studied abroad in 1968-69.

The Guccini scholarship began to take shape last year, when Mary Jenkins ’70, P’07, established a study-abroad scholarship at Dickinson. Elms relayed to Jenkins that Guccini would soon celebrate his 80th birthday and suggested they name the scholarship for him. He provided a fundraising challenge to his classmates, offering to match their gifts. Scholarship donations from fellow alumni—and fond study-abroad memories of Bologna—poured in. 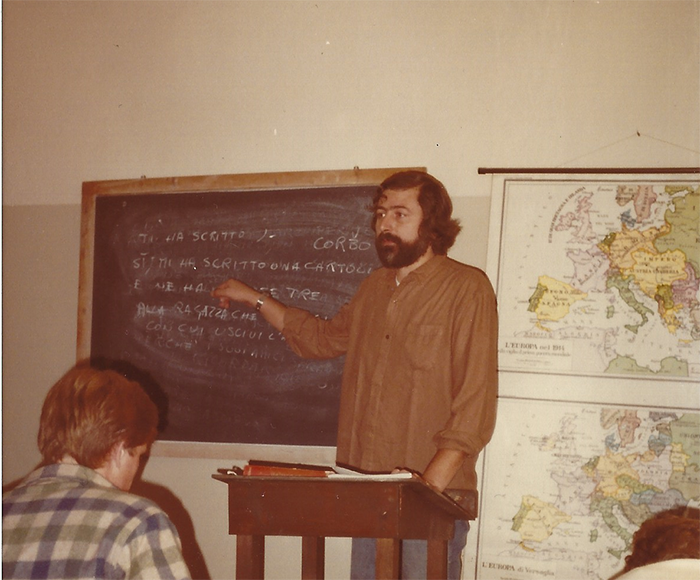 The Francesco Guccini Scholarship is awarded to a student with financial need who wishes to study in Bologna. A leadership gift from Jim Chambers ’78 enabled the scholarship to become permanently funded, so that generations of students may do the same.

The first scholarship was awarded for the fall 2021 semester.

Last summer, 40 contributing alumni met via Zoom to share Bologna memories, get updates on Dickinson study-abroad programs (as of this writing, two summer sessions and 18 fall programs are on the horizon) and offered appreciation to their former instructor.

“I am really touched by this,” Guccini told attendees in Italian, with translation from Bruno Grazioli, current resident director of the Italian-studies program in Bologna. “I would never have expected it.” 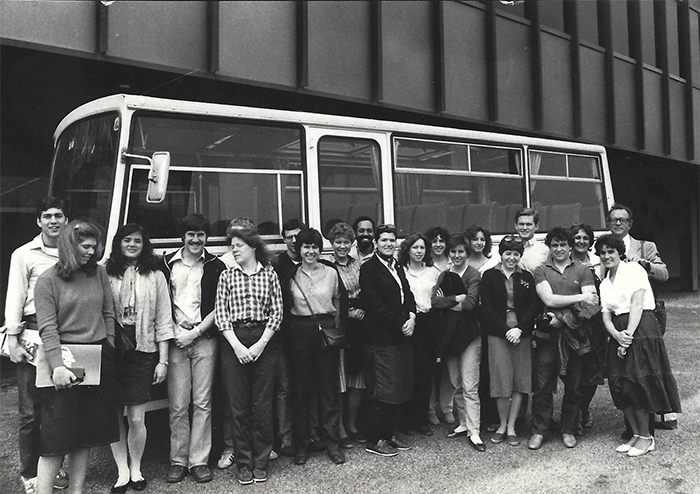 Bologna study-abroad students prepare for a group excursion to southern Italy. Experiences like these have a lasting effect, say alumni who contributed to the new scholarship.

“You left something behind that [your former students] can feel in later years,” Grazioli reminded him. “I think it’s a beautiful and special moment for the study-abroad program and the college.”

Jenkins, in turn, thanked the fellow alumni who made the scholarship possible. “Your enthusiastic response to the scholarship astonished me, and it reminded me that our time in Bologna was a very special experience,” she told them. “We should all be very happy that the fund will continue for many years, and it will provide a life-changing experience for a scholarship students.” 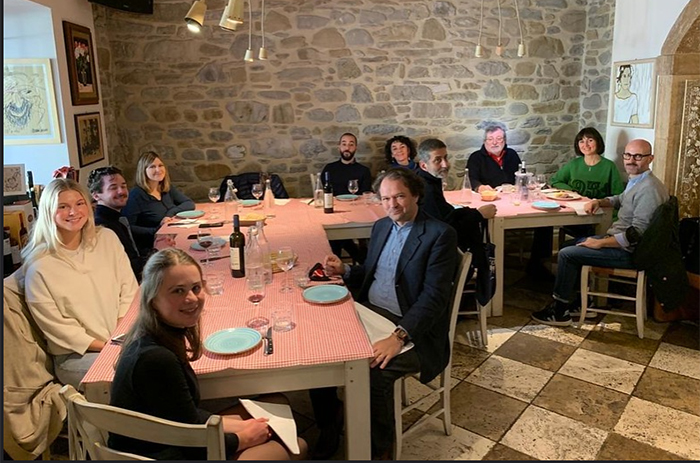 Guccini and his wife, Rafaella, lunched with Dickinson professors and study-abroad students Oct. 29 to celebrate the awarding of the first Guccini scholarship. Photo courtesy of Bruno Grazioli.

Just a few months after that online meeting, Guccini connected with several Dickinsonians on his home turf. They included the first recipient of the Guccini Scholarship, Sloan Maas '22.

Maas, an international business & management major, says the meeting was a highlight of her study-abroad experience, which has so far included trips to study history in Ravenna and Fossoli, an up-close view of food-production processes in Modena and visits to local cultural hotspots. "It's been an amazing opportunity. We are fortunate that so much of what we learn about we get to see for ourselves, which makes it even easier to make connections in class," she said.

Sampling local dishes at Guccini's favorite restaurant along with fellow study-abroad students, Grazioli and Guccini and his wife, Raffaella, Maas enjoyed seeing decades-old study-abroad pictures and learning about Guccini's teaching and recording days. And she appreciated the chance to meet the rock star who inspired the scholarship—a scholarship that enabled her to pursue education abroad.

"Being the first student to receive this scholarship is an honor," Maas said, "and getting to meet Francesco Guccini himself was an invaluable experience I am very grateful for."