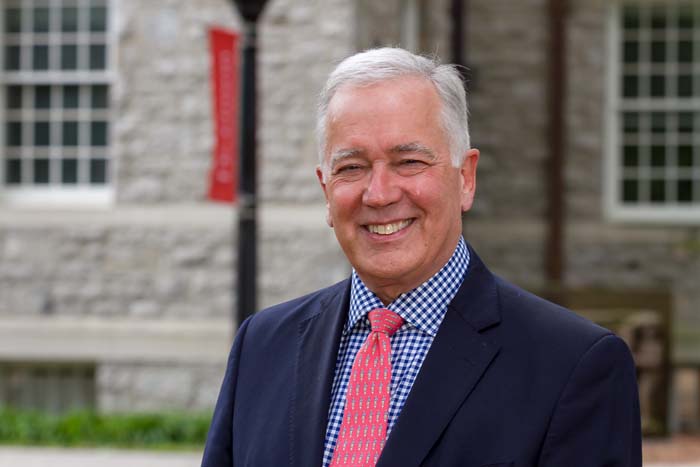 As this issue went to press, Dickinson announced that Jones will be taking on a two-year term as interim president after Margee Ensign steps down this summer. Learn more.

The year was 1960. A young Indonesian who had graduated from Dickinson College in 1952 was enjoying an increasingly promising career as a foreign correspondent for Time magazine. But he had big dreams that extended beyond his final posting in Cuba. At age 27, he quit his job, sold his sports car, stuffed the limited cash he had into a suitcase and set off for Hong Kong—a place he’d never been. His vision was to launch a magazine, and the multicultural, thriving city seemed like the perfect place to do so. Incredibly, the new entrepreneur raised $750,000 over the succeeding months and saw circulation of the new Asia Magazine explode across the region.

Our enterprising protagonist is, of course, Dickinson’s distinguished alumnus Adrian Zecha ’52. If Adrian had stopped with Asia Magazine, it’s quite clear that his life could easily be deemed successful. But of course, he did not stop, and by the 1970s Adrian had started an odyssey that saw him develop multiple successful hotel companies featuring cutting-edge concepts at locations throughout the world. Today, when most his age are long retired, Adrian is involved in yet another spectacular hotel venture, Azerai, which has opened several hotels in Vietnam, is about to open one in Japan and will expand into areas like the California wine country.

I first met Adrian when he was awarded an honorary degree at our 2019 Commencement ceremony. Not only is he a most gracious and interesting person of abundant and self-effacing good humor, but he is the patriarch of an accomplished family, including his lovely wife, Bebe. During that meeting, and in our many interactions since, it became evident that Adrian treasures the opportunity that he had to come to Dickinson in 1948 as an international student (as did granddaughter Adya ’19). As he has expressed to me, there were no barriers that prevented him from doing so, and Dickinson was a place that his parents felt comfortable sending him. The liberal-arts education Adrian received has been a cornerstone of his remarkable successes in so many diverse ventures spanning portions of seven decades.

Notwithstanding Adrian’s Dickinson experience, both he and I have been concerned about how our national climate has affected Dickinson’s ability to continue to not only attract international students but also to operate the global programs that are a hallmark of what we do. Indeed, the Princeton Review has ranked our college as having the No. 2 most popular study-abroad program among American colleges and universities. Dickinson operates 18 global programs in 15 countries, and many more through partners. We are a presence on every inhabited continent. On campus, our international students represent nearly 15% of the student body.

Adrian and I discourse often about the prevailing politics in the United States and how they will affect the ability of today’s international students to access the superior educational opportunities Dickinson offers. He is passionate about affording students the same advantages that he enjoyed, without barriers. Both President Margee Ensign and I have assured him that we are ardently committed to that goal.

Adrian Zecha’s remarkably diverse successes are truly worthy of note. But that he is also so interested in having the students of today benefit from the same Dickinson experience as he did should inspire all of us to redouble our work in this critical area, so that the rich cultural diversity enjoyed by both international students and our students abroad may continue unimpeded.