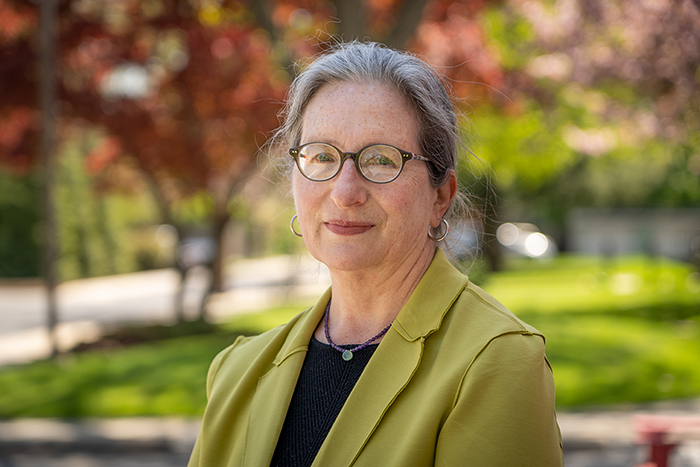 Amy Farrell, the James Hope Caldwell Memorial Chair and professor of American studies and women’s, gender & sexuality studies, has been named a 2021–22 fellow at Harvard Radcliffe Institute, one of the world’s leading centers for interdisciplinary exploration. Farrell will join an extraordinary group of artists, scientists, scholars and practitioners who will learn from and inspire one another in a year of discovery and interdisciplinary exchange in Cambridge, Mass.

The acceptance rate for the class, which represents nine countries, was 2.4%, from 1,383 applications. “The 2021-22 fellowship cohort is characterized by intellectual reach, excellence in scholarship, and creativity,” said Radcliffe Dean Tomiko Brown-Nagin, who is also the Daniel P. S. Paul Professor of Constitutional Law at Harvard Law School and a professor of history in the Harvard Faculty of Arts and Sciences. “Many of them are also focused on the most urgent problems of the day. In the wake of an unprecedented—and profoundly difficult—14 months, the challenges facing our society are daunting. Some of these challenges are new, others are merely new to the spotlight—deep and longstanding issues that have been exacerbated by the pandemic and its far-reaching consequences. Our newest class of fellows will reckon with this moment and its meaning, and they will push the limits of knowledge and practice across the sciences, social sciences, arts, and humanities. We cannot wait to welcome them,” said Brown-Nagin.

As the 2021-22 Mary Beth and Chris Gordon Fellow, Farrell will pursue an individual project in a community dedicated to exploration and inquiry. During the fellowship, she plans to complete the research and writing for her much-anticipated book, tentatively titled, Girl Scouts of the USA: Race, Democracy, Sisterhood, and Empire. This project focuses on the under-studied yet extraordinarily important history of the Girl Scouts of the USA, from its origins in 1912 through the 1980s, exploring its complex struggles over race and civil rights, feminism, and the legacies of empire and colonialism. Focusing on particularly evocative moments of its history, the project sheds light on the profound ways that the Girl Scouts worked to shape girls’ and women’s lives in the United States during a century of extreme cultural and political change.

“I am extraordinarily honored and excited to be joining the Radcliffe Institute for the year,” said Farrell. “Not only will it be amazing to be among this interdisciplinary cohort of scholars, scientists, artists and writers who can push my thinking and writing, but also spending a year immersed within the Schlesinger Library, which holds the premier U.S. women’s and gender history collections, is phenomenal. The Schlesinger Library has been crucial to me in my research from my first book on Ms. Magazine and to return to it in this capacity is a lifelong dream.”

Farrell is the author of two books, Yours in Sisterhood: Ms. Magazine and the Promise of Popular Feminism and Fat Shame: Stigma and the Fat Body in American Culture. Her research focuses on the history of girls and women in the U.S., second wave feminism, representations of gender and feminism in popular culture and the history and representation of the body and fatness, a topic for which she is interviewed frequently. Her recent media contributions include The New Yorker, International Business Times, The Atlantic, U.S. News & World Report, CNN online, Shape Magazine and Psychology Today. She also was a two-time guest on The Colbert Report.

Farrell is a past recipient of an American Council of Learned Societies Fellowship, and in 2005, she received the Distinguished Teaching Award, which recognizes excellence in teaching and is the highest honor given to a Dickinson College faculty member. It is determined by faculty voting and approved by the president.