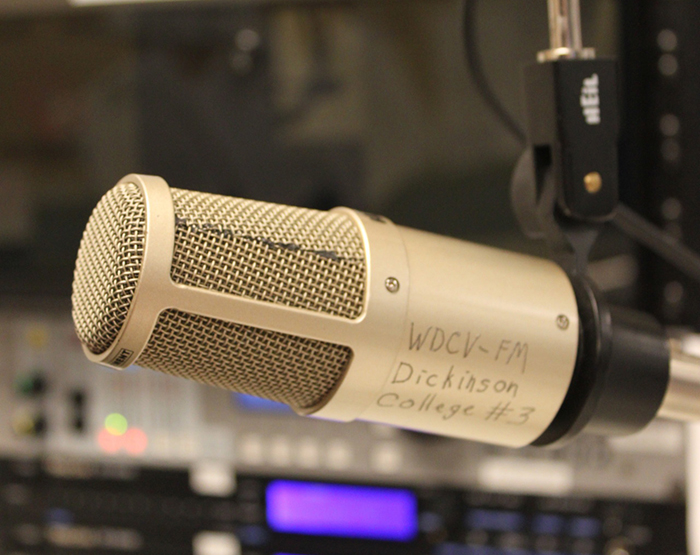 The radio play Under Milk Wood will be broadcast March 5 and 6 on WDCV-FM. You can listen at 88.3 FM or online.

Dylan Thomas’ masterwork to air on WDCV, with video to follow

On March 5 and 6, Dickinson’s Department of Theatre & Dance will bring a memorable production to life by artfully fusing an age-old art form with 21st-century technologies.

A cast of 30 Dickinsonians, performing from locations across campus and around the world, will perform Under Milk Wood as a radio drama on Dickinson’s radio station, WDCV-FM 88.3. The play will air March 5 and 6 at 7 p.m., over the radio waves and online. The following week, the theatre & dance department will release a video of the play, featuring visual elements designed by faculty and staff.

Under Milk Wood tells the story of one day in the life in a small seaside village in Wales, from sunup to nightfall. It was written by Welsh poet Dylan Thomas shortly before his death at age 39, a labor of nearly 20 years of work. One year after the play’s 1953 stage premiere in New York, it was presented for the first of many times over the BBC airwaves. That landmark BBC production featured a Welsh cast, which included Thomas’ friend, actor Richard Burton, performing as narrator.

The theatre department originally conceived of the performance as a hybrid production. To accommodate the large cast at a time when half the student population lived off campus, Professor of Theatre Todd Wronski envisioned on-campus actors playing characters onstage and off-campus students playing imagined, dreamed or dead characters, via live-projection technologies. Mermaid Players alumni were recruited to provide remotely recorded narration.

Eventually, evolving COVID-19 safety protocols altered those plans, and the theatre department prepared a full-on radio play, with alumni filling some of the dramatic roles. They include Christyn Budzyna '11, a professional lyricist who serves as a narrator, and Katie Berg Hitchens '03 and Patrick Hitchens '03, both lawyers and former Dickinson theatre majors.

“When Todd [Wronski] asked if we were interested, we didn’t need persuading,” says Katie, who notes that while the distances between actors presents artistic challenges, she and Patrick enjoy playing a married couple in Under Milk Wood—more than 15 years after they appeared together onstage in Julius Caesar and Antigone and some 12 years after their actual wedding day.

Josephine Cook ’23 performs the during a Zoom rehearsal for Under Milk Wood.

Feasting over the airwaves

To make it all work, Wronski edited the play so that it fits WDCV production requirements and led Zoom rehearsals with assistance from stage manager Matthew DiGreorio ’24 (undeclared). Kent Barrett, assistant professor of theatre design, worked with Alaina Clemence ’22 (Spanish) and Hillel Finder ’22 (physics) to record, design and master the audio clips. Professor of Theatre Sherry Harper-McCombs and Kristen Kim ’21 (English) designed and provided puppetry for the accompanying video.

That fancy technological footwork is only the vehicle. It's the play itself that shines. Wronski says Under Milk Wood's power lies in the beauty of its language, which translates well over the airwaves—even when the actors are miles apart.

“It contains some of the most beautiful, well-known poetry of the 20th century,” Wronski says. “Dylan Thomas provides a feast for the ears.”

Under Milk Wood will premiere on WDCV March 5 at 7 p.m. and will be rebroadcast at the same time March 6. Listeners may tune in at 88.3 FM or listen online. The accompanying video will be viewable for one week only, beginning March 8 (to watch the video, email theatre&dance@dickinson.edu for details).