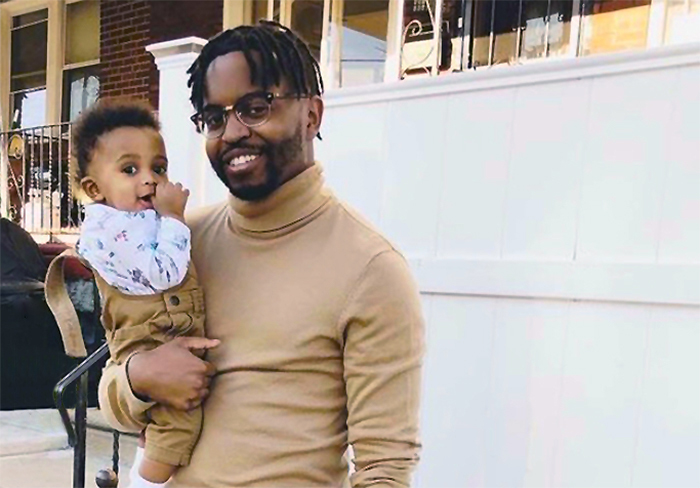 Perry grew up in Carlisle, Pennsylvania. At age 15, he got his first job in the campus Dining Hall. A first-generation college student, he earned a B.A. in communications from Lock Haven University and began his higher-ed career in the admissions departments at Central Penn College and Harrisburg University.

“Returning to work at Dickinson again was a really cool, full-circle moment,” he says, “and it was awesome to interact with the kinds of students who apply to the college. I really enjoyed the work.”

One year in, Perry was a new husband, planning to one day start a family, so the opportunity for a new role—one centering on issues he cares about and allowing him to work with students for a few years, rather than months—was too good to pass up.

Out of the gate as the PSC’s assistant director, and with guidance from then-Director Vincent Stephens, Perry launched the ACE Peer Mentor program. He went on to develop Black Excellence Week, while running a full schedule of programs aimed at educating, building skills and leadership, and fostering community and support. And when the COVID-19 pandemic hit last spring, he helped the PSC offer digital opportunities to learn and connect. (Student engagement remained active, and ACE Peer Mentor participants reported positive experiences and high academic performance at the close of the remote fall and spring semesters.)

Building on past successes

Last December, Stephens announced he’d accepted a position at Boston University. Perry continued the center’s robust programming in his role as interim director, and was officially named director on March 1.

As a Carlisle native and son of a longtime local nonprofit leader, and as a member of the Carlisle Racial Justice Coalition, Perry is building on existing PSC-Carlisle partnerships that enrich student programs. He envisions a PSC advisory board that brings student representatives together with faculty and staff to inform programming decisions, and he's excited by the good work ahead.

“If we’re going to grow as a college community, we need a safe space where all members of the student population can come together and have tough conversations, and a place where students can talk about issues that are important to them right now,” says Perry, who continues to plan virtual programs so students of all class years can continue to participate and connect. “It’s a challenge, because Zoom fatigue is real for all of us, so we’re thinking very creatively about the goals we want to accomplish and making programs reflect what students want and need by making them more interactive and fun.”