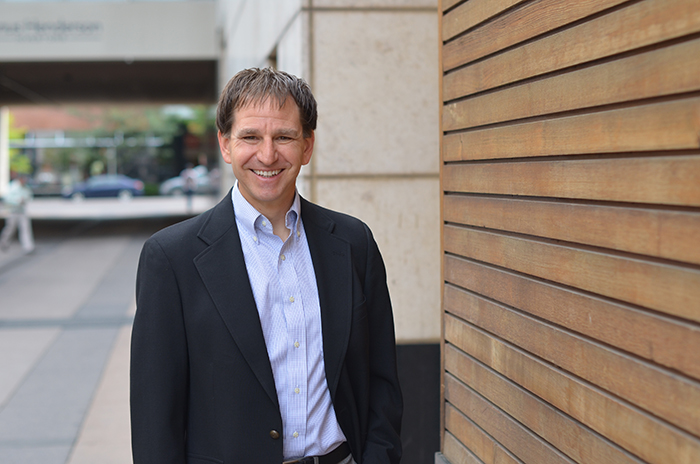 Michael Eber ’91 had a few weeks of freedom between his first job and graduate school, and he wanted to make the most of them. The trip he took would transform his outlook and inspire him to craft an intercontinental career that he continues to refine as he reaches toward greater meaning and satisfaction in his work.

At Dickinson, Eber was a psychology major, tour guide and Nisbet fellow with minors in education and economics. After graduation, he worked for several years at an economic and market research firm in Denver, Colorado, his home state.

“I liked working with statistics and research, but I always knew I wanted to go to grad school. I just wasn’t sure what I wanted to study,” he says. “So I spoke to people in a variety of fields about what they do, and that helped me to eventually decide to get an MBA.”

The summer before enrolling in the MBA program at Willamette University, Eber traveled throughout eastern and southern Africa. He was so inspired that, in between his first and second year of grad school, he worked in Zimbabwe through the Emerging Markets Development Advisers Program.

“I learned so much about international business and cultures and how to serve the greater good on a global scale,” he says, “and sitting and talking with several generations of Zimbabweans, I had a whole new sense of the issues of poverty, race relations and social justice. When I returned to graduate school a year later, I was a different person.”

After grad school, Eber began a career management consulting career with Deloitte, working first in the San Francisco Bay area and then in Chicago, and traveling across the country to work with governmental, nonprofit and for-profit executives at top national and international organizations. But when an acquaintance alerted him to an opportunity to work with microfinance partners in Uganda to establish mobile-phone startups for women living on one U.S. dollar a day or less, Eber took a leave of absence to pursue the opportunity. Three months in, he left his position at Deloitte to continue that work.

These were the days before smartphones, when flip phones were all the rage. Much of the developing world did not even have land-line infrastructure in place, let alone mobile-phone technology, so for many people any kind of telephone communication was unavailable. The organization Eber worked with brought in cell phone towers and provided starter kits, training and microfinance loans for small-business owners who could earn a decent living selling minutes to their neighbors.

“Suddenly, people were connected. They could bring their phones to their shops or market stalls so they could research the best prices for their crops. They could call the doctor if their child was sick,” Eber explains. “It just completely changed the arc of lifestyle for these people, economically, socially, politically, medically.”

Eber continued to work throughout the developing world on that project, and when it was sustainable, he came back to the U.S. and accepted a job in international consulting in D.C. with the nonprofit Grameen. About seven years later, seeking a lifestyle change, he moved back home to Colorado, where he worked in real estate, property management and economic development, most memorably working on a restoration project of a century-old school in Denver.

Fast forward to 2017: Eber tapped into his experience in consulting and his values-driven work abroad to cofound McManis Consulting, a firm helping public, private and nonprofit organizations to meet their goals by developing the strategy, vision and purpose that are in line with company values and a workforce that’s passionate about the work.

“It’s been quite a journey,” he says. “I’m a big believer in looking for opportunities that play to your strengths and that align with your core values—and to seek out opportunities that make me excited to get to work every day.”