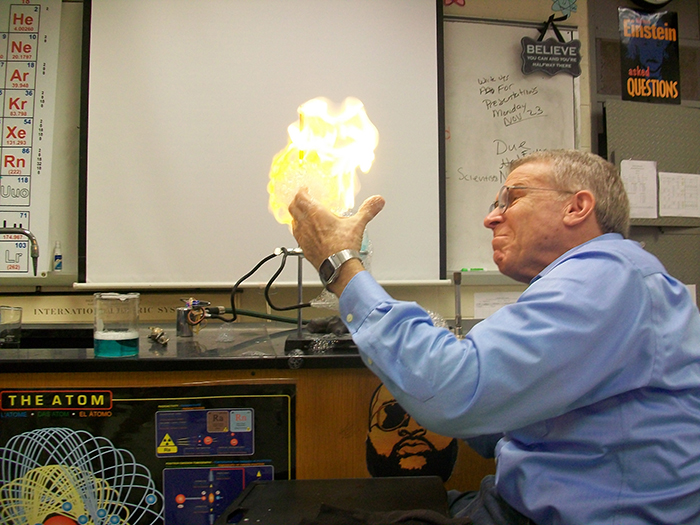 "I did all kinds of things to keep their attention," says Bronstein, who, after a global-marketing career, channeled his chemistry major and Mermaid Players expertise in the classroom.

Alan Bronstein ’66’s life changed dramatically one snowy day in January 1985. Suddenly, he needed to learn an entirely new way of living and working. Eventually, that journey led him to rekindle a long-deferred dream.

Bronstein, a Philly native, majored in chemistry and economics at Dickinson and got involved with Mermaid Players. After graduation, he enrolled in Temple University’s MBA program with a dream of helping to better the world.

“It was during the Vietnam War, and I was very idealistic,” Bronstein remembers. “I became interested in international business because I felt if we could get the corporations of the world to become more multinational, war itself may become bad for business, and peace would follow.”

Bronstein attended grad school part-time and substitute taught full-time, first at a junior high school, then at two high schools in Philadelphia. At the junior high, he was deemed fit to teach anything—history to home economics, science to shop—because of his liberal-arts background. His Mermaid Players days came in handy too.

“I was one of those teachers who was all over the classroom—very active, very theatrical—to keep the students’ attention,” says Bronstein. He also benefited indirectly from his Dickinson theatre experiences when a fellow Mermaid Player, Robert “Bud” Warren ’68 alerted him to a job opportunity in international business, his intended field.

Working in international marketing for Grove Manufacturing, Bronstein traveled to 10 countries in his South American territory, and also to New Zealand, Australia and Singapore. He worked overseas for weeks at a stretch and then enjoyed weeks at home between travels so he could spend time with his wife, Ronnie, and their growing family. It was a dream job for him.

But when a recession loomed, he knew he needed to make a change. At Ronnie's suggestion, the Bronsteins opened a video-rental store, then a booming industry. All went well until one blizzardy day in January 1985, when a customer called for help installing a VCR.

On his way to meeting his customer, Bronstein had a freak accident that severed his spine. He spent five months in rehab, learning to use a wheelchair and perform other daily tasks as a paraplegic. After working for another year at the video store, he and Ronnie retired and moved to Philly to be closer to family.

“I spent about two years playing independent investor and watching the Financial News Network. And then I decided I needed to get out of the house and see people again,” Bronstein remembers. So, he consulted Pennsylvania’s Office of Vocational Rehabilitation. His career counselor, a former student, asked him what he wanted to do next. 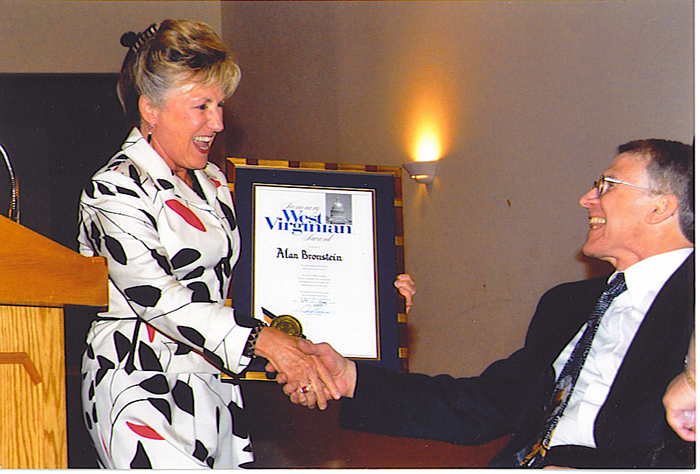 “I told her, ‘I used to teach. But I was one of those teachers who was all over the classroom. I don’t know if I can do that from a wheelchair.’ ”

Having seen him in action, his former student encouraged Bronstein to give it a shot.

Teaching, in fact, had been Bronstein’s career aspiration in high school—that is, until a young friend warned him she’d never marry someone with a teacher’s salary and the Vietnam War turned his attention toward peacemaking ventures. Bronstein enrolled in a local college to earn his teaching certificate. Before classes started, he already had an offer.

Bronstein earned his M.Ed. in chemistry from Arcadia University and taught at Bodine High School for International Affairs for five years. Then he taught chemistry at Philadelphia’s Central High School, his alma mater.

Bronstein sponsored Central’s drama society and earned two teaching awards—including the 2009 Freida J. Riley Teacher Award, bestowed during a ceremony in West Virginia attended by approximately 200 people from across the United States. And after 24 years of teaching, he retired.

“Teaching wasn’t new for me, but I learned how to modify what I was doing so it would work,” he says, noting that he used light flashes, bubbles, controlled explosions and other events to liven up his classroom. “And the rewards were tremendous. I loved working with the kids, and I’m still in touch with quite a lot of former students.”

Asked for advice for fellow Dickinsonians considering first, second or third careers, he passes along the words of wisdom he offers students and former students.

“Do what you do for the passion and enjoyment of it. Just find something you love to do,” he says. “I was lucky, because I was able to do that twice.”