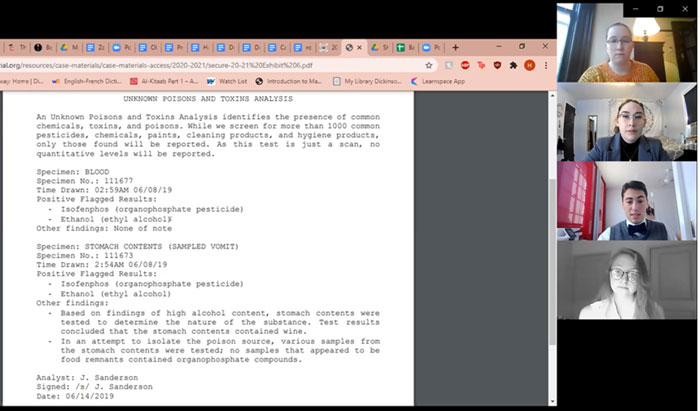 Even in the face of a pandemic, the legal system has to push ahead. And so too do the facets of its training ground, among them mock trial. That's why Dickinson recently hosted a virtual national mock trial tournament, which saw two students take home Best Attorney awards.

“We’d been batting around the idea of hosting a tournament for years, and this was the kick we needed,” says Claire Simpson ’22 (quantitative economics, international studies), on how COVID-19 spurred the decision for Dickinson’s Mock Trial team to bring a recent competition to its backyard. “We also wanted to host our own tournament to help out all the teams across the country that were in the same boat as us—struggling to find virtual tournaments that had space left.”

Not surprisingly, the tournament was conducted via Zoom, with 13 participating teams from 10 colleges serving as defense, prosecution, judge and bailiff from locales around the country. (The last in-person tournament, back in the spring, found the Dickinson squad making it to the National Opening Round Championships.)

Simpson planned the event, and she admits that the undertaking was a “logistical nightmare.” Issues such as making sure schools didn’t play their own teams, that teams didn’t play each other and that judges didn’t have overlaps or conflicts of interest tangled the planning process along the way. But in the end, an array of technical failsafes, eager participants and dedicated people helping to smooth things out made the event a success.

And while Dickinson didn’t win the tournament, Mac Khoury ’22 (Middle East studies, economics) and Jordyn Ney ’23 (undeclared) won Best Attorney awards (and two weeks later, at another tournament hosted by George Washington University, Simpson won both a Best Attorney and a Best Witness award). Simpson sums up the event as a huge success: “The tournament went great!” she says. “It could not have gone better!”