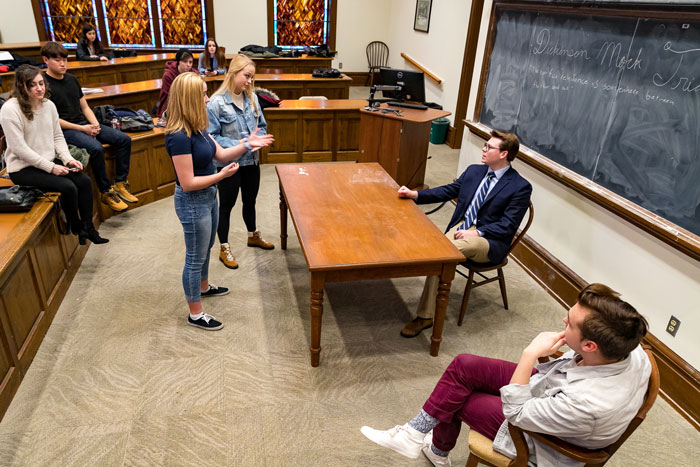 The Mock Trial team gets together in Denny Hall earlier this spring to practice for March's Opening Round Ceremonies. “This year, there are quite a few reasons why our team is doing so well, but first it’s because everyone is so dedicated,” says Claire Simpson '22. "We’re one big community this year."

Earlier this spring, Dickinson’s mock trial team took fourth place in a regional tournament at Penn State. And then they moved on to what’s known as the Opening Round Championships (ORCs), which pitted 192 teams across eight sites in March. And the tough opponents the team faced only made it all that much better.

“ORCs was a blast, and we had some serious competition,” says Claire Simpson '22 (quantitative economics, international studies), the closer on Dickinson’s prosecution, who argued her way to a Best Attorney award at regionals. “We were the serious underdogs and were determined not to be 'fish food' for the high-powered schools. I can firmly say that we were not fish food!”

For the uninitiated, mock trial pits teams from around the country against one another in a courtroom setting, with each team tackling the same case—written by the American Mock Trial Association—preparing both for the prosecution and the defense.

“You have to argue whose fault it is, basically,” says Simpson, who plans on going to law school after Dickinson. “It’s a lot of work preparing to deal with all the wacky theories other schools come up with for why their defendant isn’t guilty. You have to use the facts and materials in the case, but teams that use them imaginatively usually do well.”

And clearly, Dickinson’s team is using imagination to its advantage, advancing to the ORCs for the first time since 2016. And across the board, the team members and coaches say that they wouldn’t be there without a closely knit group of dedicated participants.

“I think balance is one key to our success,” says Al Masland ’79, mock trial coach, president of Dickinson’s Alumni Council and a judge in the Cumberland County Court of Common Pleas. “All of our witnesses are poised and able to stay in character, and our attorneys are all strong. I know it’s cliché, but that’s the big difference—parity in skill and a team mentality.”

The team didn’t advance to the finals at ORCs, but the experience garnered going head to head against some of the best teams around was well worth the trip.

“We beat University of Pennsylvania’s team, and tied with Hamilton—and there’s a long-standing rivalry there,” says Simpson, noting that the team kept pace with top-ranked Tufts in the first round. “I couldn’t be prouder of the team. We’re still pretty new and inexperienced, and they really put it all out on the line. This weekend was great for us going forward, and next year, it’ll be nationals all the way!”