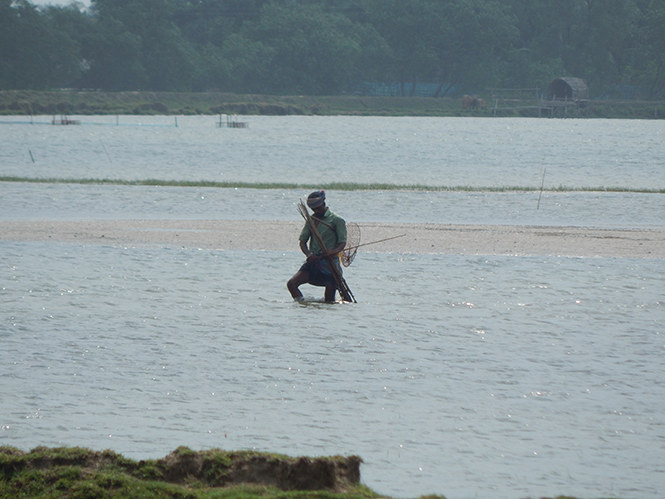 A Bangladeshi fisherman searches for his next catch. Photo courtesy of Assistant Professor of Environmental Studies Heather Bedi.

According to the National Oceanic and Atmospheric Administration, 2019 was the second warmest year on record, prompting environmental scientists to confront the implications brought upon by climate change and global warming. One of the greatest threats this presents is extreme weather and its impact on agriculture.

Rodriguez and Zawad aimed to observe how global food security affects vulnerable populations and how factors like race, geographical region and gender can impact the ability to adapt and rebound. First, they had to understand Bangladesh’s unique position on the world’s stage as a developing country with a growing population and diverse natural resources. Over three-quarters of the workforce lives in rural areas, and two-thirds of the population is engaged in farming or agro-based industrial activity. Meanwhile, 17% of the population (around 160 million citizens) is extremely poor, with over 40 million in the nation malnourished.

“We started thinking about how climate change affects food security, particularly among indigenous populations or those in specific regions,” said Rodriguez. “How can we use this research for resource sustainability? Data shows that in rural areas, one in nine people go hungry, and our research shows that as extreme weather continues to be churned by climate change, food security will only become a larger issue.”

To help guide their research, the team referenced the Bangladesh Climate Change Adaptation Survey, which was conducted in 2012 by the International Food Policy Research Institute (IFPRI). The survey detailed data on farmer demographic characteristics, farmers’ observations of changes in climate and farmers’ adaptation to changes in climate.

“Over the last 20 years, farmers recorded an increase in temperature, while they observed a notable decrease in rainfall,” said Zawad. “They noted that the rainfall had increasingly become more erratic, came earlier in the season than normal and had led to longer period of draught.”

To help curb the severity of these challenges, 91% of farmers made changes to their crops, irrigation techniques and business strategies. The team observed how regional and demographic variabilities played a role in how and when the farmers adapted.

“[Although] the regional differences are not something you can see in the survey, in tandem with the literature, we can start to understand the complexities of what is going on in Bangladesh,” said Rodriguez.

The project is one of many student-faculty research projects at Dickinson, where students have the opportunity to conduct advanced research as an undergraduates that most students don't experience until graduate school.