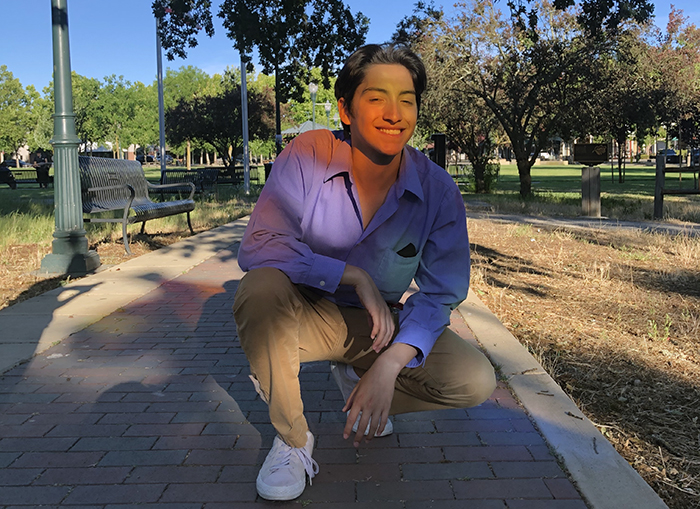 California native Allan Farfan Canales ‘23 (English) has created an album of music about his first year at Dickinson, as well as several short stories, screenplays and satirical articles, all of which he sketches out by hand in a black-and-white Composition notebook. He’s filmed two of the screenplays with friends, and is also involved as a tutor, Triton, tuor and DJ. And during Dickinson’s fall 2020 kickoff, he was awarded the George Shuman prize for academic excellence. Allan discusses the close friendships he’s made through the MANdatory leadership program, the diverse community he’s found at Dickinson and more.

English, with minors in creative writing and film studies.

Watchmen by Alan Moore and Catch-22 by Joseph Heller.

I get to explore something I enjoy—reading and writing—on a deep, creative, theoretical and critical level. The English department as a whole is incredible: There’s a strong, tight-knit support system composed of students, faculty and staff. Our courses are often cross-listed with other departments, and we host neat events like the Literary Desserts Contest and guest speakers. I also like that we are located in East College, my favorite academic building on campus. We even have a department T-shirt!

I love California, but by the time I was a junior in high school, I needed a break from the increasing heat and wildfires that were afflicting my home. On the day I first visited Dickinson, during a school-sponsored tour of East Coast colleges, it was snowing. Don’t get me wrong, I had seen snow before this moment! But that initial sight of the campus coated in snow stayed with me.

On a more concrete note, I fell in love with the Waidner-Spahr Library and was eager to take advantage of the study-abroad opportunities that the college provides.

East College for learning, Waidner-Spahr Library for studying (or goofing off in the computer labs downstairs) and WDCV for relaxing and expressing myself.

Sweet-glazed salmon with steamed rice and vegan applesauce cake. Oh! Try adding a scoop of ice cream into a cup of coffee. That stuff hits different.

English 220: Intro to Literary Studies, by far! This class reshaped my understanding of English as a field of academic study. Associate Professor of English Claire Seiler assigns great works spanning a wide range of genres and time periods (it took reading Othello for me to enjoy Shakespeare). She introduced me to the wonderful world of literary critical theories (gender performativity was my favorite one that we studied). She even gave us cool assignments, like using a poetics term to analyze a song from my Spotify or detailing a personal literary canon for our final essay. I decided to declare my English major because of this class. I feel proud of my growth as a writer during that semester. In fact, my essay on gender performativity in Frederick Douglas’s Narrative won the English department’s award for best paper written by a first-year student! The beautiful thing is that I did not know this award existed prior to winning; Professor Seiler nominated my paper (after having me rewrite it, like, three times, of course).

I’m really good at expressing myself. For someone who couldn’t communicate well until kindergarten (because of bilingual household things), I’ve learned that I have the “gift of gab,” but this manifests on the page as well as through speech. I’m bilingual and biliterate in English and Spanish, and I’m intermediate in French at this point. I started writing short stories in the sixth grade. This held me over until I was an upperclassman in high school, when I got into filmmaking (I wrote a script and adapted it into a short film), satire (I published some fake news articles) and songwriting (I drafted a 12-song mixtape but lacked the equipment or skill to record it).

This past fall, however, I released my first full-length album, Red Rose Renaissance, on SoundCloud. It’s an autobiographical telling of my freshman year of college, detailing the doubts I felt before coming to Dickinson to how the pandemic strengthened my appreciation for campus life after being sent home. I recommend the title track, which features Caitlyn Longest ’23 (she also designed the album cover).

I can freestyle, too. You can play a beat for me and I’ll maybe spit something for you. Sure, it’s intimidating in front of crowds of people, but also really rewarding. I think about four-year-old Allan and imagine him being proud of me.

I’m going to devote myself to a career as an author-rapper-producer-filmmaker-poet. It’s just a question of whether I will do this before or after getting my MFA in dramatic/creative writing or film production.

If not releasing a rap album or earning tens of thousands of dollars in scholarships, I’m just proud of myself for writing everything by hand. Lyrics, scripts, essay drafts, story manuscripts, journal entries—these can all be found written in cheap composition notebooks from Staples, with a Pilot G-2 05 pen. The entire process behind an essay—freewriting, research and citing, drafting, revising—I do by hand. Shoot, I once wrote 50 pages of freewriting for extra credit in high school. My handwriting is lanky and narrow and sometimes a scrawl, but mostly it has a beautiful mad-genius aesthetic.

I’m so grateful for the friendships and relationships I have made at Dickinson. I’m from a Mexican American family in California. All of my childhood friends and classmates were, for the most part, Latinx and first-generation Americans. On the other hand, I went to a college-prep independent high school, a predominantly white institution where there were only six Latinx students in my class, and there were still a lot of less-represented minority groups in the student body.

What I mean is that I never experienced true diversity before coming to Dickinson. Here, I’ve met people who differ from me in ethnicity, race, sexual orientation, nationality and political ideology. And this has expanded my horizons and made me a better person. For example, MANdatory—the academic enrichment and leadership development program for first-year male-identifying students of color at Dickinson—let me become friends with non-Latino men of color. In addition, being an English major has allowed me take cross-listed courses so I have befriended students who have different majors.

The most memorable moments I have at Dickinson involve spending time with the people I’ve come to know and care about: bonding with fellow men of color through MANdatory (we don’t often have spaces to do so); preparing meals in the dorm kitchens with my friends; dancing the night away at Noche de Baile; spitting freestyles and chatting with guests for my radio show, Red Rose Rap, at the WDCV station; working out at the gym or visiting my lifeguard friends at the pool; studying at the library but mostly talking and getting side-tracked. For my 19th birthday, my friends—whom I had only known for four or five months up to that point—threw me a surprise party. That’s definitely my favorite moment of my whole time at Dickinson. A year later, during a pandemic, while in a stay-at-home period, my friends managed to do it again. Wow, I love this place.

Making one of the scariest and riskiest decisions that I could have ever made—leaving home and my original friends and family to go someplace where I didn’t know anyone and most things were “different”—was also a smart and effective (in other words, the best) strategy for achieving a fulfilling and exciting life.