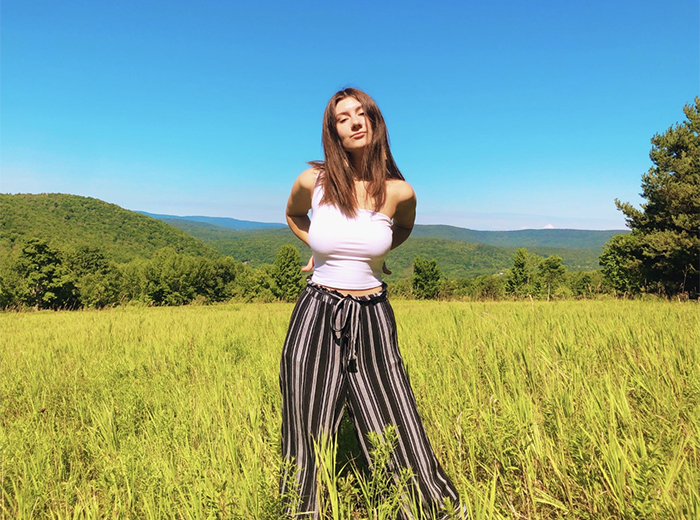 Jackie Logsted ’22 is passionate about storytelling, American politics and activism, and she found an ideal academic path as an American studies and film studies major. She's also the first student to earn a scholarship through the Donald Moffat Scholarship Fund, founded in 2019. Jackie and her mother cowrote a book, released Jan. 5, as part of a two-book deal with Penguin Random House. She also launched a quarantine-themed podcast with Erin Clarke ’22 (art & art history).

My Brilliant Friend by Elena Ferrante.

I loved taking Settler Colonialism with Professor Nikki Dragone. To delve into an area of American history that is so rarely discussed and largely glossed over, despite its foundational effect on our country, has given me so much perspective on my home and my place within it.

I’ve had so many amazing professors; it is so difficult to choose. I loved taking Latino Film with Associate Professor of Spanish Margaret Frohlich, who soon after became my film advisor. Her wealth of knowledge on an area of the world I hadn’t previously studied made me so excited to come learn from her every day.

I want to be a screenwriter and director, but I am also very passionate about American politics and activism. American studies was the perfect fusion of these two areas for me—a major where I get to study American history in conjunction with American art, representation and structures and institutions. I believe filmmakers have a responsibility to represent different types of people ethically, and I’m learning more and more about people through my major every day. Paired with my film studies minor, it’s a wonderful combination for me.

I’ve been playing guitar and singing forever. And I can juggle!

About my book and podcast:

My mom and I sold a two-book deal at auction to Penguin Random House this past fall, which means a book that we wrote together will be coming out this January! Joint Custody is from the point of view of a dog who desperately works to get his owners—The Man and The Woman—back together after their split. The first book was published on Jan. 5. The sequel will be out September 2021. This has been such an incredible experience for both of us. I am so lucky to live in a household where my creativity is not only supported, but I’m given the opportunity to create with my parents!

Erin Clarke ’22 and I started a podcast during quarantine all about college and growing up. Hey bby! can be listened to anywhere podcasts are listened to, including Apple.

Coming to this point in my life, where we’re getting ready to go out into the world, has been wild and overwhelming at times, but the most important thing I’ve learned is to keep my friends close. My Dickinson friends have become family. When I’m up until 2 a.m. writing a midterm paper or script, when work has me feeling strung out or when I’m questioning what I want to do with my life and feeling lost, it’s important for me to home in on the people who have made this experience so special.