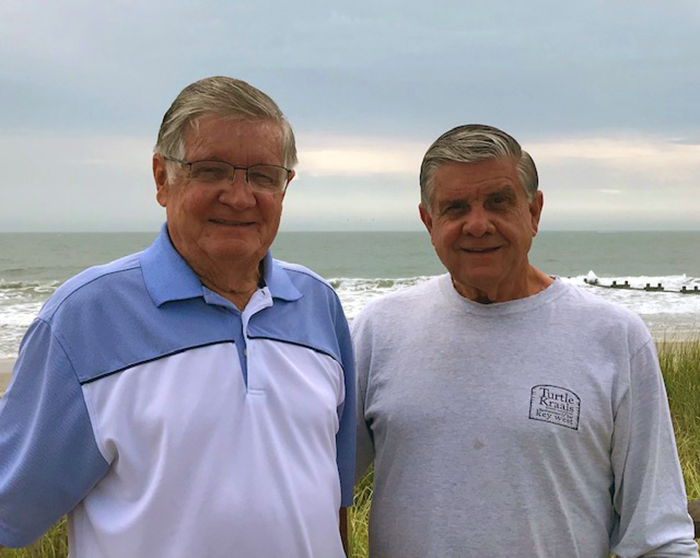 Growing up, the Davis siblings were well aware of the importance of working hard and dreaming big. The key, their parents stressed, was a good education.

“My parents never went to college, but my dad constantly reminded us that we could do anything we wanted as long as we got educated,” says Tom ’62, a retired plastic surgeon. “There was never any question we’d go. The only question was where.”

Bob ’59 knew he wanted to be a doctor since 10th grade, and he chose Dickinson’s premed program after chatting with Director of Admissions Ben James ’34 at a college fair.

As a Dickinson chemistry major, Bob rushed Phi Psi as a freshman, served as a peer counselor and ran track and field during all four years on campus. He also played football and ran cross country for two years each. An intro history course sparked a lifelong interest in the American Civil War.

“I think I knew almost everybody on campus my senior year. We also had a first-name basis, a real informal relationship, with the professors, and I didn’t hesitate at all to talk with them outside of class,” said Bob, who once disputed a chemistry-class grade by placing a friendly call to his professor’s home phone (Bob was right; the grade was changed).

Tom made close friends through Phi Psi, the glee club and in class. He held student jobs as resident advisor, lab assistant and waiter in his fraternity house. And like Bob, he declared a chemistry major with his sights set on medicine. While Bob entered Thomas Jefferson Medical School after graduation, Tom set off for the University of Pennsylvania.

Both brothers interned at York Hospital in York, Pennsylvania, and both served during the Vietnam War. 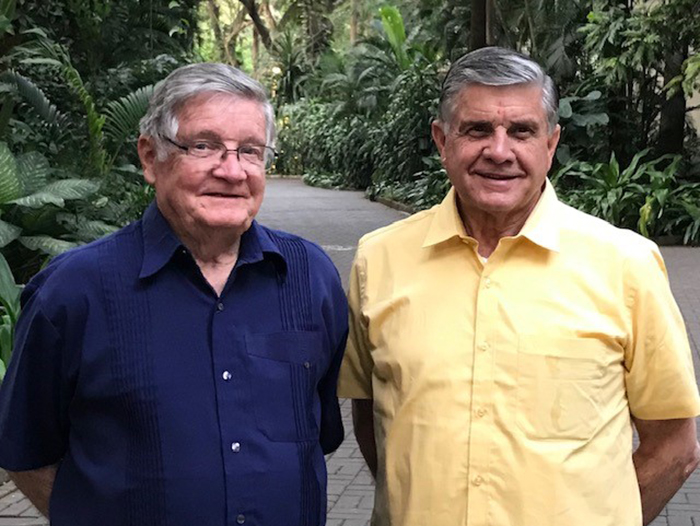 Bob and Tom Davis in India, where they oversaw the development of a school.

Bob was a general surgeon in the Navy. After his service, he entered the University of Pennsylvania’s plastic-surgery program—an area of medicine he’d become intrigued with before the war, while working with a young cleft-palate patient. Although he was offered a big-city job opportunity from future Surgeon General C. Everett Koop, Bob chose instead to teach and practice in his old stomping grounds in York. At his private practice at York Plastic Surgery Associates, he specialized in treating children with cancer, congenital defects and major trauma.

Tom was a flight surgeon during the Vietnam War, serving with a Marine helicopter squadron in Danang; he’s still in regular contact with several of his squadron mates. After the war, he completed his residency at Hershey Medical Center, now known as Penn State Health Milton S. Hershey Medical Center.  And like Bob, he specialized in plastic surgery.

“At first, I resisted going into plastic surgery, because that’s what my brother had done,” says Tom, “but eventually, I realized that reconstructive surgery was what I really liked to do. It’s partly because every day is different, because you work with different areas of the body, and partly because it takes a certain amount of imagination and aesthetic sense.”

After working on staff at the medical center for several years, Tom joined his boss in private practice. The small town of Hershey, Pennsylvania, felt like home. He quickly became an active community volunteer.

Tom joined the Hershey Rotary Club, serving as president and district governor. Over the years, he’s served on the boards of the Hershey Museum, Hershey Theater and Hershey Gardens. After retirement, he got involved with the Milton S. Hershey School, working with third-graders and mentoring students interested in medicine. Last year, Tom was named an honorary alumnus of the school. Tom also has been involved at Dickinson, serving on the Alumni Council and as alumni representative to the Board of Trustees and also chaired several reunion committees.

Bob also joined his local Rotary Club, and he served as a Dickinson class agent and a reunion-planning committee member. Beginning in the early 1990s, he participated in international mission trips—some faith-based, and others focused on medical care. Bob estimates he’s taken 65 mission trips to places all over the world.

When Tom retired, Bob encouraged him to join in. The two took annual mission trips to India, where they oversaw the progress of a school they contributed to building and visited with children they sponsored. In Ghana, they performed major surgery.

Tom was inspired to deepen his Dickinson legacy after chatting with Hershey School grad J. Bruce McKinney ’59 about a scholarship Bruce and wife Sally had set up at Dickinson. Bob soon came on board. The Robert M. and Thomas S. Davis Endowed Scholarship Fund provides for a final year of Dickinson education for a student pursuing a medical career. Junior-year students interested in any aspect of medicine are welcome to apply.

“We feel that we’d been given a gift by being able to practice medicine and help others,” Bob says. “We need medical professionals, especially during this time, and we want to make it a little easier for students to follow that path.”

“All of us felt we got a wonderful education and experience at Dickinson, and this seems like an ideal way to give back,” Tom agrees. “It all comes back to our parents—just like they stressed the importance of education, they also stressed that on becoming successful, we were obligated to help others.”