'A Most Uncommon Man' 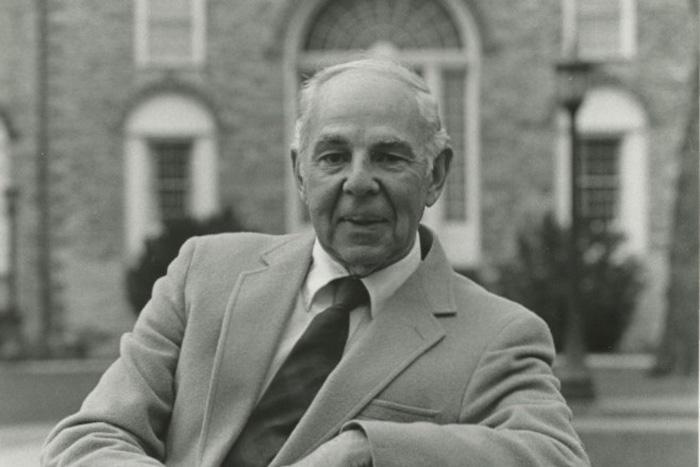 'Mr. Dickinson' Ben James '34 remembered for life filled with achievements and dedication to the college

One of Dickinson's icons, Benjamin D. James '34, passed away July 4, 2015, just shy of his 103rd birthday. From his days as a student to his years as a teacher, dean, coach and mentor, James epitomized the spirit of his alma mater. Although James went on to garner national recognition for his professional endeavors, it was his 85 years of devotion and service to our community and the countless lives he changed here that made this extraordinary man a beloved Dickinsonian.

James was born Aug. 10, 1912, in Plymouth, Pa., and began his Dickinson career in 1930, with an academic scholarship and a job working as a waiter to cover room and board. He was a member of Raven’s Claw, Skull and Key, Omicron Delta Kappa, Phi Kappa Psi and the Interfraternity Council.

An outstanding student-athlete, James also found the time to join the football, basketball, baseball and track teams. Weighing a mere 145 lbs., he played center—opposite a “220-pound pile driver,” he recalled—on the storied football squad that upset Penn State 10-6 in 1931, one of the many reasons for his 1976 induction into Dickinson’s Sports Hall of Fame. For decades, every football season began with one of his famous pep talks to the team. 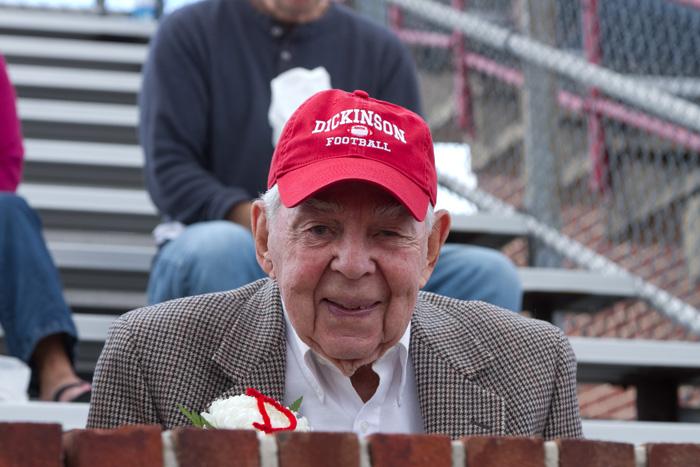 James began his teaching career at his hometown high school while working on his master’s at Bucknell University, which he earned in 1936. In 1941 he returned to Dickinson as an instructor of education and psychology and also found the time to coach the football and basketball teams. In 1944 he left Dickinson briefly to serve as a lieutenant in the U.S. Navy, participating in the Philippines and Iwo Jima and Okinawa campaigns, during which he was beach master, as well as a deck and educational officer.

James returned to Dickinson in 1946 as associate professor of psychology and would go on to serve the college he loved in just about every possible capacity. In 1947 he was appointed director of admissions and dean of the freshman class; in 1963, he became the college's first dean of students. He received tenure in 1949 and was chair of the psychology and education department from 1951 to 1953. In 1957, he was promoted to professor and named Richard V.C. Watkins Professor of Psychology and Education. 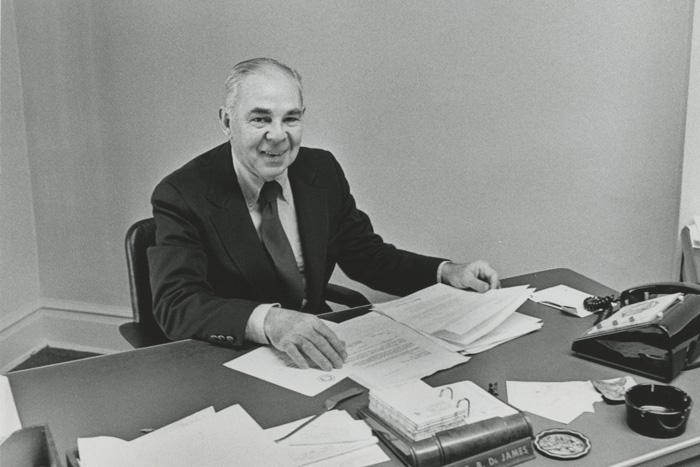 James received his Ph.D. in education in 1962 from the University of Pennsylvania and became a national authority on admissions practices and graduate-study programs, founding the Pennsylvania Association of College Admissions Directors and authoring studies for the Association of American Colleges, the American Council on Education and the Commonwealth of Pennsylvania. He, along with Bruce Cooper ’46 and Jim Evans ’51, helped found Harrisburg Area Community College in 1964, creating its core curriculum—with an emphasis on the liberal arts—virtually from scratch.

In 1977, when James retired, fellow psychology professor Stephen Coslett noted, “Ben is of the old school where tenure is an emotional commitment to the college as a well as a legal relationship. … I know his emotional love of the college and his tenure in its finest sense will continue on. Ben is a most uncommon man in his loyalty and his dedication to the college.”

That dedication continued in the form of service on the Alumni Council (1984-86) and the Board of Trustees (1979-83), his ongoing mentorship of former and future students—especially athletes and Raven's Claw members—and his volunteer work in Carlisle and well beyond. His community contributions and accomplishments include co-chairing Pennsylvania’s Advisory Council on Employment Security under Gov. Dick Thornburgh, chairing the school-town committee working through the integration of Carlisle’s public schools, chairing the Cumberland County Children’s Welfare Committee (its first chair), serving as president of the Carlisle Rotary Club and raising funds for the United Way of Cumberland County. 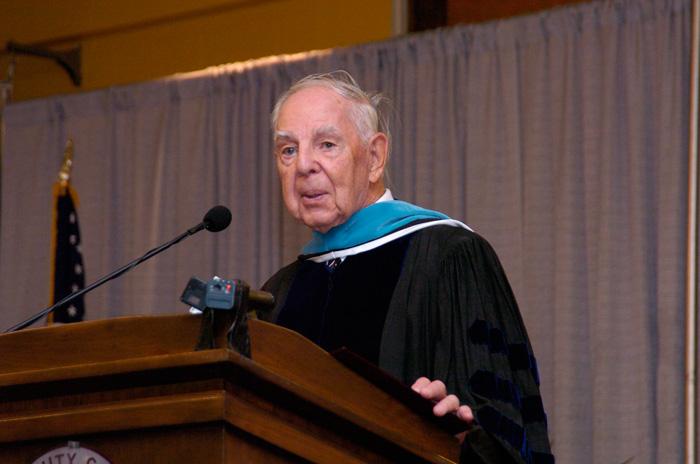 Among the dozens of honors bestowed on him over the years are the Alumni Council’s Distinguished Alumni Award (1986); honorary degrees from the Dickinson School of Law (1976), Dickinson College (2006) and Harrisburg Area Community College (2007); and the Alexis de Tocqueville Humanitarian Award (2009). And as one honorary degree citation notes, he was “perhaps the only person to outlive a building named in his honor, the Benjamin D. James Center, a 1987 building replaced [in 2008] by a larger science education building on the same site,” now James Hall, part of the Rector Science Complex.

"Ben’s accomplishments were many, but I will remember him for his friendship," said President Nancy A. Roseman. "He was one of the first people to welcome me to Dickinson, and we stayed in touch these last couple of years." 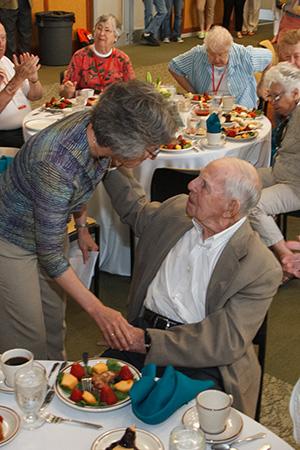 After talking with James about all the positions he held at Dickinson and all the presidents for whom he served as unofficial advisor, Roseman realized there was one important office he had never filled. So, last year, as Ben celebrated his 80th class reunion during Alumni Weekend, she handed him the keys to the presidency for a day.

James touched the lives of literally thousands of college students. Citing his grandfather, David John King, as his greatest influence, James noted years ago in an interview, “He told me not to put a priority on money. The important priorities are people and stepping up to help them.”

Services will be held Friday, July 10, at 1 p.m. at St. John’s Episcopal Church in Carlisle. A receiving line in the Social Hall at St. John’s will follow the service. Burial will be private.

In lieu of flowers, the family has requested that memorial contributions be made to a scholarship fund James started in the 1960s “to support worthy and needy students” or to St. John’s Episcopal Church. Cards or notes can be sent to James’ son, Mr. J. Wesley James ’63, 201 Shatto Drive, Carlisle, PA 17013-2122. 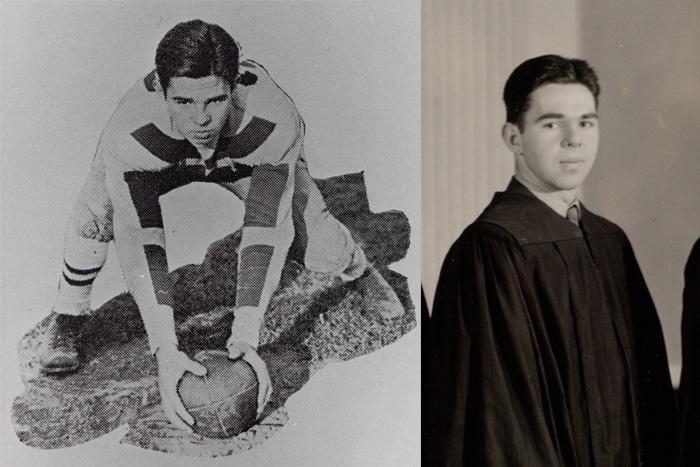