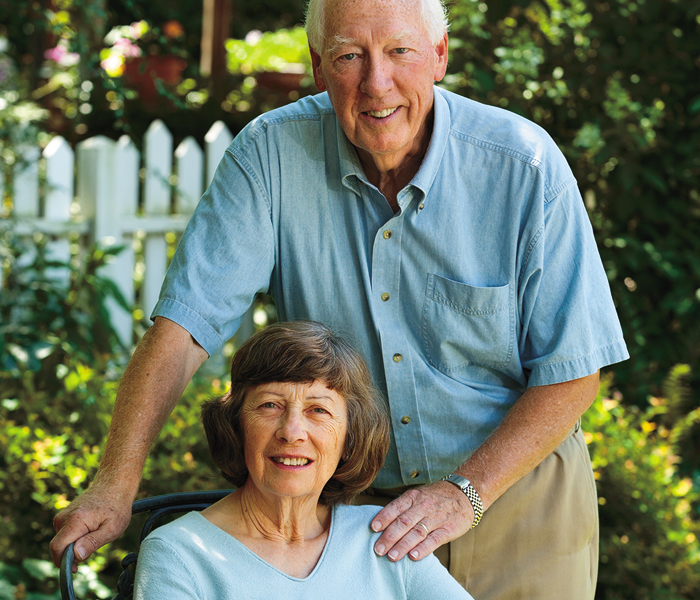 J. Bruce McKinney ’59 was a young insurance supervisor, seven years out of school, when he received a letter that would change his professional life. Dick Zimmerman, a man he’d never met, was looking for an assistant at Hershey Chocolate Corporation, and he’d heard that McKinney could take on whatever challenge came his way.

“I’d been away from Hershey[, Pa.,] for about 11 years,” said McKinney, a graduate of the Milton Hershey School, “and I didn’t have much of an interest in working there at that time, but I was curious. So I went to the interview to learn more.” That openness to new experiences would take McKinney far, positioning him to ultimately transform an iconic attraction, revitalize a major corporation and help preserve the legacy of its philanthropic founder.

Born in Butler, Pa., McKinney moved to central Pennsylvania, after the sudden death of his father, to attend the Milton Hershey School. Founded by the chocolate magnate, the school provided house parents, a structured schedule and an education to improve the prospects of children in need. While the homesick 11-year-old didn’t like living apart from his mother and chafed at the rigid schedule and the chores, he also thrived in class, formed close relationships with teachers and got involved with the glee club and football team.

At the encouragement of Ben James ’34, then-director of admissions, McKinney entered Dickinson in 1955. He majored in political science; joined the glee club, choir and Alpha Chi Rho; and graduated with plans to enter law. But during his first weeks at the nearby Dickinson School of Law, a chance meeting on High Street altered those plans.

McKinney had seen Sarah “Sally” Hollister ’60 around campus, but didn’t know her well, that sunny October day, as he left Alpha Chi Rho house and headed toward his parked ’59 Chevy Impala. Sally caught his attention by calling out, “Nice car!” Within the year, they married, and he left law school to work.

After teaching English for a year—he’s still in touch with some former students, now grandparents—McKinney went into insurance, moving from claims analyst to supervisor. He’d just started a new job in King of Prussia, Pa., when he received that life-changing letter from Zimmerman, the executive assistant to the president of the Hershey Chocolate Corporation. Zimmerman had heard from Hershey School faculty that McKinney was a fast learner and hard worker with a strong liberal arts background. He offered McKinney a job as his executive assistant.

“It wasn’t something I’d ever planned to do, but I was very honored, and after learning more about it, I took the job,” McKinney remembers. Five years later, McKinney was made assistant general manager at Hershey Entertainment & Resorts Company (HERCO) and was promoted to general manager of Hersheypark the following year. He went on to serve as CEO of the entire corporation in 1987.

Under McKinney’s leadership, Hersheypark added buzzed-about features like the SuperDooperLooper and ZooAmerica, and HERCO hosted concerts by top entertainers (he remembers James Taylor, Liza Minelli, Liberace and the Carpenters fondly). Memorable moments include his decision to end Alice Cooper’s live act with a mock-guillotine, as opposed to a mock-hanging (“I said, ‘Whatever gets him off the stage quickest!’ ”), and the moment he calls his “big 15 minutes of fame,” when MTV reported that he’d banned Guns ’n Roses from returning to play in Hershey. (The band had arrived very late, then played its outdoor concert well past Hershey, Pa.’s, noise curfew, broadcasting amplified obscenities out into the night air for all residents to hear.)

McKinney also divested far-flung properties that had been acquired before his tenure as CEO, bringing focus back to Hershey, Pa., attractions and saving the corporation from near-financial ruin. By his retirement as CEO in 2000, HERCO had enjoyed seven years of record-breaking prosperity. And, two years into retirement, when plans emerged to sell Hershey Foods—a move that McKinney and other retired Hershey execs, including Zimmerman, believed would dishonor Milton Hershey’s legacy and weaken the company and town—McKinney led national communications efforts in the David-and-Goliath campaign to stop the sale. Hershey remained independently owned.

Over the years, McKinney served on Dickinson’s board and as reunion volunteer, and he was named the college’s first executive-in-residence in 1986. His many awards include Dickinson’s Benjamin Rush Award, Penn State’s Honorary Alumnus Award, an Alumnus of the Year award from Milton Hershey School and the 2013 Hershey Bears Hockey Hall of Fame Award.

He and Sally have two daughters and five grandchildren, and they’ll celebrate their 57th wedding anniversary this summer. They support their shared alma mater through the J. Bruce and Sarah H. McKinney Scholarship Fund, which helps students in need of assistance to complete their final undergrad year.

"Sally and I firmly believe in giving young men and women the same opportunities to move ahead, take chances and succeed."

“I didn’t go to Dickinson thinking I’d be a theme-park manager, but the independence I learned at Milton Hershey School, coupled with the education I received at Dickinson, gave me the ability to explore things I might not have thought of and move appropriately within new ventures,” he says. “Sally and I firmly believe in giving young men and women the same opportunities to move ahead, take chances and succeed.”