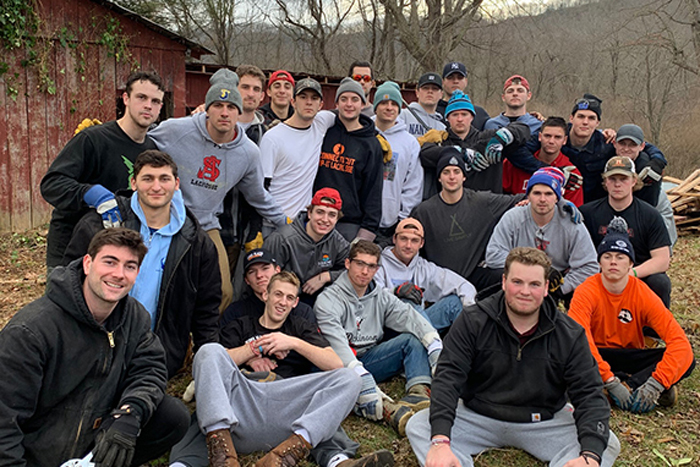 The Dickinson College men's lacrosse team takes a moment from their work to take a group picture during a service trip to West Virginia.

Restoring hope board by board and nail by nail, Dickinson students lend helping hands to communities in need

Dickinson’s long-held commitment to working toward the greater good means that civic engagement is a core part of the educational experience. Though this commonly plays out through service-learning projects in the local Carlisle community, it’s also carried forward by the hundreds of Dickinsonians who participate in service trips each year.

Every other year since 2006, Red Devil men’s lacrosse team members trade their sticks for tools to join forces with organizations like Habitat for Humanity and the Mennonite Disaster Service. This year, the team traveled to Greenbrier County, West Virginia, a community devastated by record flooding in recent years. Their task? Assist in the teardown and salvage of a barn and build a home for a local woman. All in just one week’s time.

“In the first day of work, we were tasked with clearing out a large barn full of miscellaneous objects and clutter,” says Teddy Macfarlane ’22 (economics). “By the last day, we not only deconstructed the entire barn, but we also removed all of the nails from the barnwood to be sold to cover the costs absorbed by Habitat for Humanity.”

In addition to making a difference for this community, the students reaped rewards as well. “I believe community service is important for everyone to do in their lives at some point,” says Cole Pellicano ’20 (policy management.) “There’s a reason everyone feels so gracious after doing some form of public service, and it’s because you are directly benefitting another person’s life.”

Miles away in Nashville, Tennessee, a parallel story was unfolding for students as part of Dickinson’s Center for Civic Learning and Action’s (CCLA) weeklong public health service trip. The group partnered with United Cerebral Palsy of Middle Tennessee and Project C.U.R.E., an organization that delivers more donated medical supplies and equipment to under-developed regions than any other in the world. During the week, students designed and built a wheelchair-accessible ramp at a local residence.

“I marveled at the work we accomplished in just one day!” says Keyshane Whitley ’21 (biology, biochemistry & molecular biology). “It was a full team effort, and I think this is why we were able to get the job done … because of authentic teamwork.” 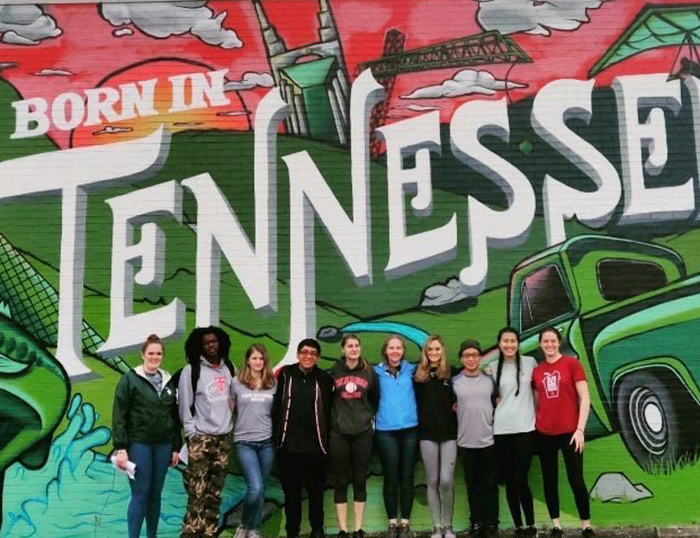 Student volunteers with Dickinson's Center for Civic Learning and Action pose in front of a colorful sign in Nashville, Tennessee.

As men’s lacrosse head coach David Webster ‘88 sees it, experiences like these are a key part of Dickinson’s useful education for the common good. “I hope that the [students] find value in their service and being able to give back to communities here and elsewhere,” says Webster. “It’s something that goes beyond an athletics focus; it helps build that overall, well-rounded educational experience.”

Whitley echoes that sentiment. “To see the faces of the people we helped was so heartwarming. I felt so empowered,” he says. “I lost myself during my week of service and learned so much about myself and those around me.”

Learn about winter and spring break service trips and other service opportunities.