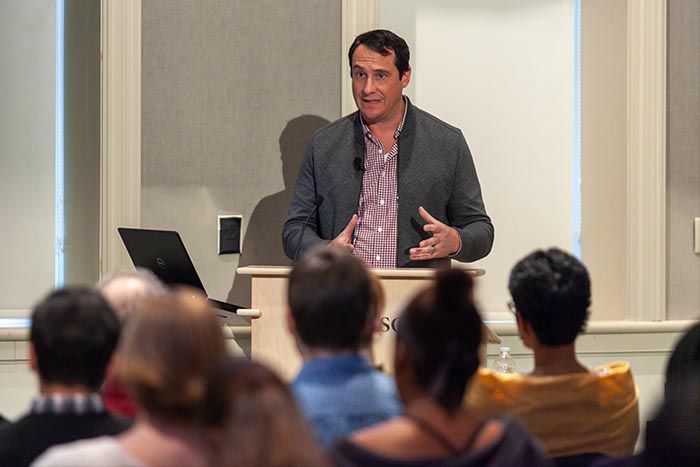 “I needed a change from the typical East Coast path, so I agreed to move to Los Angeles.”

Not many have what it takes to make that jump needed to fulfill their dreams—John Orlando ’96 did, and he shared his story with the Dickinson community during his public address as this year’s Cogan Alumni Fellow, which brings English majors back to campus to connect with current students.

Orlando graduated from Dickinson in 1996 with a degree in environmental studies and English. He tried on a few different careers, working on Wall Street and in hospitality management but felt compelled to pursue his passion on the West Coast.

This opportunity led him to meet a Disney recruiter and, coincidentally, “the recruiter liked my degree in English but was more impressed by my experience as a Dickinson Writing Center tutor,” he said. This recruiter connected Orlando to his first job at the William Morris Agency, where he worked in the features and television literary departments. From there, he worked in development at John Wells Production, was a talent and literary manager for Circle of Confusion and was one of the producers for Contradiction Films, where he worked on one of the most successful worldwide digital projects to date, Mortal Kombat: Legacy. Now, he has transitioned to work for Universal 1440 as the senior vice president and head of live action.

Orlando learned that not having the typical film background was a benefit to him in the entertainment industry. “Compared to film school, where all students did was learn about film and watch movies their whole lives, I had attended a liberal-arts college and studied abroad,” he said. “I provided that outside perspective.”

Orlando firmly believes that for those who study English to be successful, they should learn as much as possible about as much as possible, check under every rock, walk through every door, always keep writing new ideas, understand their abilities and limitations and take pride in their passion.

“One the most exciting parts of this business,” he said, “is taking the seed of an idea and turning into something that will be put on a screen for people to come enjoy and love.”