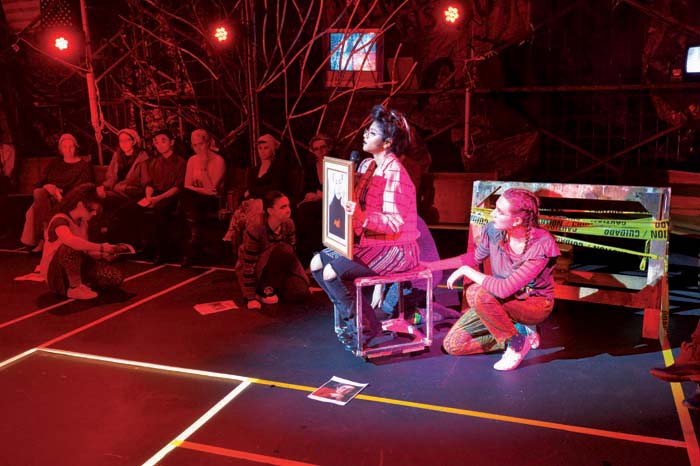 From the start, the audiences for Dickinson’s two fall mainstage productions knew something unusual was afoot. On arrival for the play We Are Pussy Riot (or Everything Is P.R.), the audience was divided into small groups and led through the backstage area and onto the stage. Audiences for the dance concert, Art Works, were met with a preshow happening—an exhibition by faculty artists and dance by the Dance Theatre Group (DTG) and the Hypnotic student club.

These are the latest examples of convention-bending theatre at Dickinson. By blurring the divides between art forms, and between theatre seat and stage, Dickinson’s Department of Theatre & Dance signals that new approaches to performance have arrived.

We Are Pussy Riot (WAPR) shined the spotlight on a real-life Russian feminist art collective, made world-famous after a brief performance on the steps of an iconic Russian cathedral. Staged in protest of the election of Vladimir Putin, the performance led to the protesters being placed in jail. Witnessing a reenactment of the protest heard ’round the world, the WAPR
audiences moved from the backstage area to the stage, where they found their seats. All were asked to show respect for the “cathedral” they’d entered—the men removed their hats; the women were offered headscarves. Continuous video broadcasts and soundscapes, created by students, added to the immersive experience. Throughout the show, a shadow puppet of Vladimir Putin, created by Professor of Theatre Sherry Harper-McCombs, loomed over the scene. 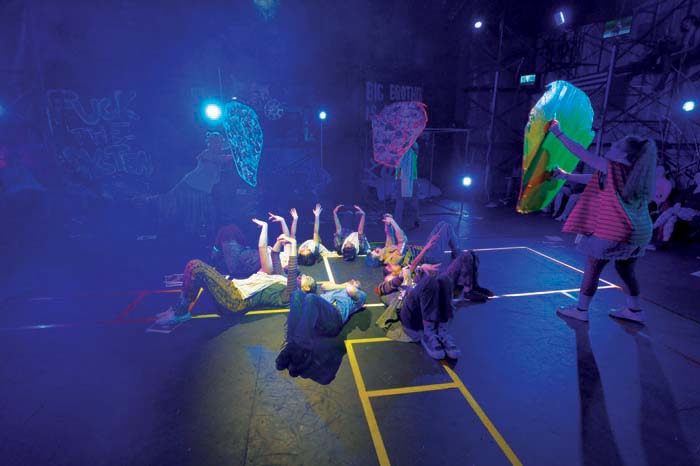 Art Works—a collaboration among the art & art history, creative writing, music and theatre & dance departments; the Central Pennsylvania Youth Ballet (CPYB); Hypnotic dance group; and DTG—broke the barrier between audience and performers, and between backstage and onstage, in the opposite way. Instead of bringing audiences onstage, the performers came to them. All of the behind-the-scenes workings—tech gear, sound crew and so on—were visible.

The interarts elements were the  foundation of the show. The choreography was created in direct response to faculty works—verse by poet-in-residence Adrienne Su; costumes and puppets by Harper-McCombs; visual works by art professors Anthony Cervino, Ward Davenny and Todd Arsenault ’99; performances by music professors Jennifer Blyth and James Martin; and a composition by Professor of Music Robert Pound. The concert also featured Leah Blatt ’22, a student in the Dickinson College Ballet Certificate Program With Central Pennsylvania Youth Ballet. 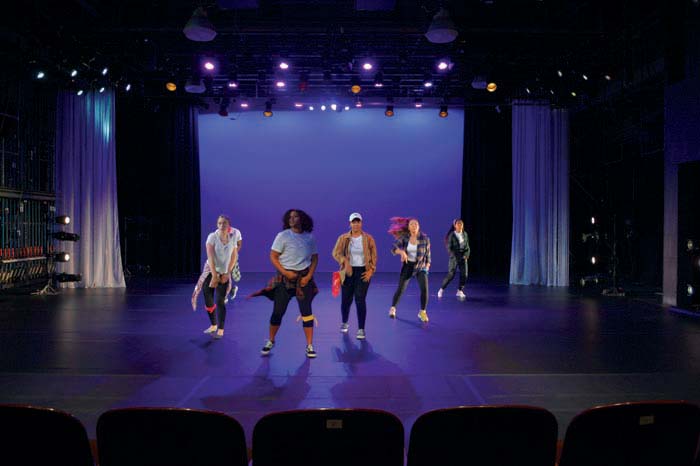 Naturally, these interdisciplinary partnerships present logistical and  artistic challenges. So too does performing nearby audience members, says Karie Miller, assistant professor of theatre.

“By bringing audiences into the performance as invested bystanders, we created experiences that were different each night,” says Miller, who directed WAPR. “So the students had to be ready to accept anything the audience brought to the performance.”

These are timely concerns—inclusive, social-justice-tinged productions are all the rage at younger, edgier companies.

“There’s less ‘theatre magic’ and more authenticity in theatre right now,” says Sarah Skaggs, associate professor of dance, “and it fosters a more empathic connection with the viewer than during a formal mediated experience, when the audience is separate from the stage.”