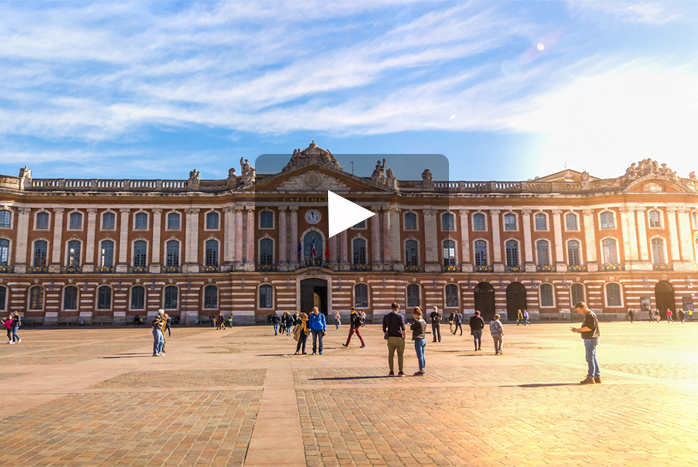 Bevin McDevitt '20 (anthropology, French & Francophone studies) had studied French for many years and she knew she wanted to study abroad at Dickinson College. What she hadn't anticipated was the level of insight into the language and culture she would receive through Dickinson's yearlong study-abroad program in Toulouse. The Dickinson in France program gives students the opportunity to live and study in Toulouse, known as one of France's most youthful cities because of its vibrant student population. Language-intensive and designed for students with an advanced level of French, the program offers courses at the Dickinson center and one of five local universities. While in the program, students live with home-stay families, enjoy academic excursions to sites of regional and national interest and may undertake internships.

"[With] the 24/7 immersion, I could feel my progress within the first month," says McDevitt. "I wanted to become proficient in the language. Since I stayed the whole year, I was eligible for the DALF (or Diplôme approfondi de langue française) French exam, which is recognized by France and is a certificate of your language proficiency. I did well, so I think that is a big confidence booster because it shows that staying for the year was definitely worth it."

Intensive abroad programs like this are one of the reasons Dickinson has been consistently recognized as a leader in global education. With 18 programs in 15 countries and courses in 13 languages, Dickinson is consistently ranked among the top 5 colleges for long-term study abroad and is the only school to twice win NAFSA’s Senator Paul Simon Award for Comprehensive Internationalization, which is considered to be the pinnacle achievement in global education on campus and abroad.

In addition to the cultural immersion offered by the Dickinson in France program, McDevitt also found a seamless transition between Dickinson and Toulouse, France.

"I'm a double-major, so part of my concern was that all of my credits wouldn't transfer over, but Dickinson makes it really easy," she explains. "There are five universities in Toulouse you can choose from, ranging from the Toulouse School of Economics to the Catholic Institute, which is more liberal arts. So even staying the whole year in France, I was able to get all my anthropology major requirements [while] missing a whole year at Dickinson in Carlisle; I'm still on track to graduate on time, and I have all my major requirements finished."