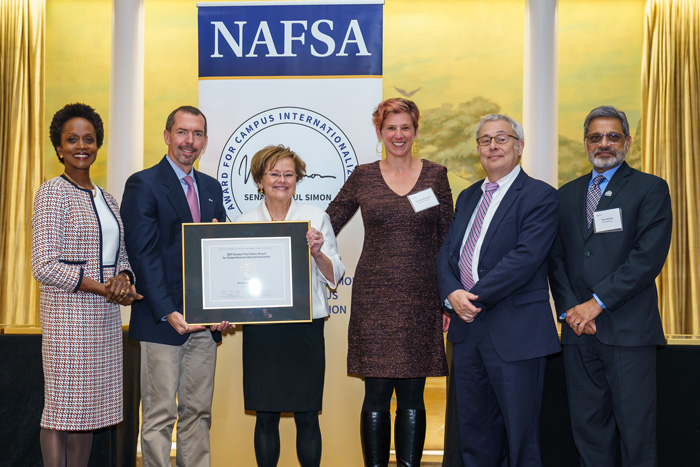 Dickinson, Ensign get a special shout-out during national awards ceremony

During a Nov. 21 ceremony in Washington, D.C., President Margee Ensign accepted a prestigious national award that formally affirmed Dickinson's role as a leader in global education.

The Nov. 21 Simon Award ceremony, which was livestreamed, took place during International Education Week, established jointly by the U.S. Department of State and the U.S. Department of Education to celebrate the benefits of international education and exchange in preparing Americans for a global workforce. It included a panel discussion with Ensign and four fellow presidents from 2019 award-winning colleges and universities.

Speaking in advance of the discussion, Ravi Shankar, NAFSA president and chair of the board of directors, noted that the award was established in part to create “a more welcoming and globally engaged United States and strengthen ties across the international community” through global education, which “lies at the core of an interconnected world characterized by peace, security and well-being for all.”

“The institutions we are recognizing today are leading the way in achieving that goal,” he said.

Martin Simon, son of the late senator and chair of the board of the counselors at the Paul Simon Public Policy Institute, agreed and gave a special shout-out to Dickinson, as the inaugural Simon Award-winner and only two-time awardee, and to Ensign, who has written and spoken extensively about the importance of global education in an increasingly globalized society.

“I thought you were channeling my father when you said that a lack of international knowledge is one of our greatest national security threats,” Simon said to Ensign, during his brief remarks. “That was truly a belief of my dad's and part of the motivation behind when, in the wake of 9/11, he decided to team with NAFSA and get the ball rolling, in what has become the Sen. Paul Simon for Study Abroad Act.”

“The future will require—of us, our students, our children—a level of international understanding, coordination and cooperation unparalleled in human history,” Ensign later affirmed. “We’re thrilled, at Dickinson, to win this award for the second time.”