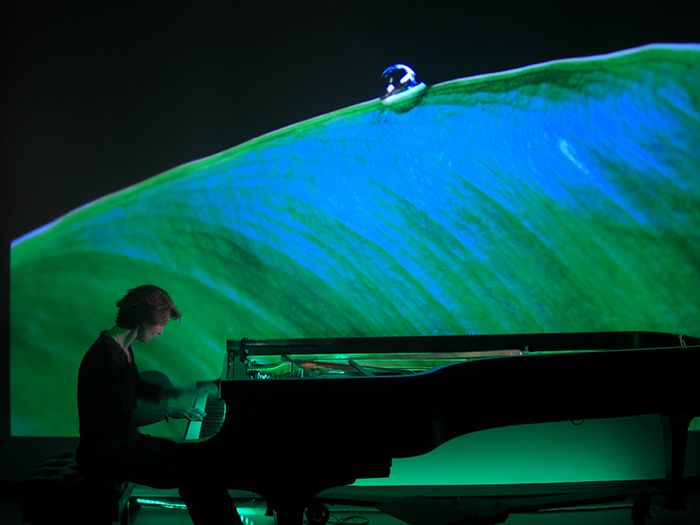 It covers 71% of the Earth’s surface, comprises roughly 90% of the plants you eat and fills up 50-65% of the very body you inhabit. We’re speaking, of course, of water, and whether you encounter it today in a reusable bottle, a raindrop, an iceberg, mist, an ocean wave or in your food, it’s as fundamental to your life as the air you just drew in.

Two Dickinson College arts events on Sunday, Sept. 22, bring the profound significance and beauty of water into the spotlight. The first is Current, an interarts performance that comes to the Rubenhall Recital Hall at 4 p.m.

Combining the talents of Dickinson’s music and art faculty, Current examines the waterscape as history, and reveals the consequences of the way we’ve interacted with this vital natural resource. It features performances by Jennifer Blyth, professor of music; James Martin, assistant professor of music; and the Heare Ensemble, of which Blyth is part; as well as a video installation by Todd Arsenault ’99.

Blyth conceived of the program last year, after performing a handful of water-themed works during a well-received Dickinson alumni event at Philadelphia’s Union League. She went on to curate a full program of works representing different styles and eras in musical history that can be performed in several configurations, as a solo piano concert or with an ensemble and voice. In it, you’ll hear works by Ravel and Copeland; a little-heard piece by contemporary composer George Crumb; and Eve Beglarian’s 2011 setting of a 1928 Robert Frost poem about a devastating flood, featuring a backing track recorded by the College Choir. Joined together, these pieces invite the listener along a stirring aural journey with convention-defying twists and turns.

“Masterpieces such as Debussy’s La Mer, Smetana’s The Moldau or Ravel’s Ondine offer hues of idyllic scenery and evoke images of a tension free nature, but I want the program to be a little bit like an exhibit of consequences of man and nature in the same place, at the same time, as opposed to the kind of pieces that we often hear,” says Blyth, who previewed the concert as a solo performance in early September and also during a live broadcast on Philadelphia public radio station WRTI. “Landscape emerges here as a current, cumulative record of nature and man, of how we shape water and it us.”

Arsenault’s video—the artist’s first collaboration with music faculty and his first work created for a live performance—provides a visual context to that narrative, and augments its emotional pull. To create it, Arsenault used stop-motion animation techniques—a  painstaking process that began with painting and layering transparent images and cut paper, manipulating those elements and shooting more than 10,000 images over the course of two months—and intercut that animation with 16-mm found footage, which he manipulated in editing. Throughout, he considered not only the overarching themes and formal structure of the music, but also the emotional content and narrative trajectory.

“Hearing the incredible intensity and textural complexity of the compositions [Blyth] selected, I immediately knew there was a great opportunity to create a work where sound and image could merge in a transformative way, without overpowering each other," he says. 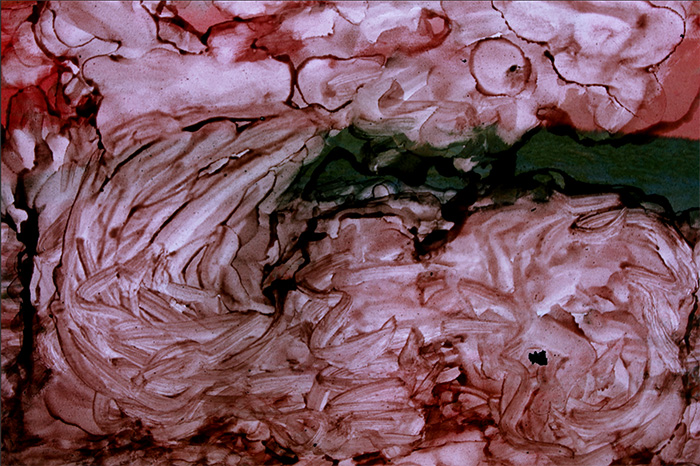 After the concert, the audience will be invited to attend the opening reception for Edward Burtynsky: Water, 6-7 p.m. in The Trout Gallery. Organized by the New Orleans Museum of Art, the exhibition corrals large-scale aerial photographs by one of Canada’s most respected photographers, who used high-tech digital photography techniques to spotlight the global water-shortage crisis, and the ways that it is reshaping the Earth. The exhibition will remain on display at The Trout Gallery through Oct. 19. Gallery hours are Monday through Saturday, 10 a.m. to 4 p.m.

While both Sept. 22 events offer new opportunities to understand and process a complex problem, they also allow us to catch a glimpse of the variety of ways that working artists and musicians can spark conversation around contemporary issues in new and compelling ways.

“The most rewarding part of this collaboration has been the experimental aspect,” says Arsenault, explaining that because his video is timed to recorded music, there’s a risk that, during a live performance, the timing may not perfectly line up, “and this is what makes the piece feel a little more human … there’s the possibility of pleasant and unexpected surprises.”