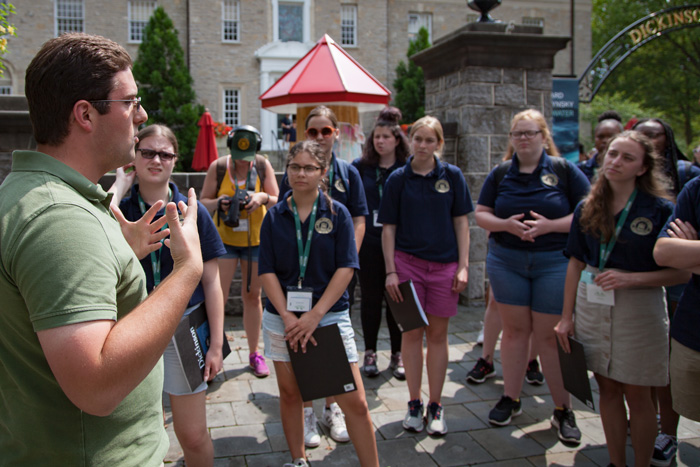 At a stop in front of the Weiss Center for the Arts, Cooper Wingert '20 gives National History Academy students a tour of campus. Photo by Joe O'Neill.

More than 100 high school students from around the country recently descended upon Dickinson and Carlisle to absorb local Civil War history as part of the National History Academy.

The highly selective, immersive five-week study experience offers students with an interest in U.S. history, law and government hands-on exploration of landmarks where that history was made: in Washington, D.C., Virginia, Maryland, West Virginia and Pennsylvania.

Students toured campus and Carlisle, locations that still have physical reminders of that tumultuous period in American history. And in Cooper Wingert ’20 (history), the author of a nearly a dozen books on the era and a walking repository of Civil War history, they found the perfect guide.

“Considering that the students had just visited Gettysburg, it was fitting that they came to Dickinson and Carlisle, which came under fire from Jeb Stuart's Confederate cavalry on July 1, 1863,” says Wingert, who explained the shelling of Carlisle while pointing out extant damage on buildings around town from the shelling. “Carlisle well situated not only to continue a discussion of the Gettysburg Campaign but also to explore the coming of the war itself.”

“We were very grateful to have these academy students here on campus, to show off the resources of the House Divided Project and the deep and compelling history of Carlisle and Dickinson,” says Professor of History and Pohanka Chair in American Civil War History Matt Pinsker, also the director of House Divided. “And from what I heard afterward, the history campers were most impressed by spending time with our really impressive group of students. That kind of interaction was what made this visit really special.” 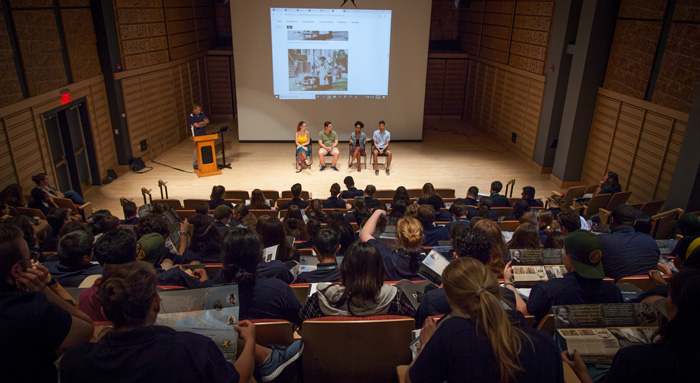 The visit included a tour of campus and the House Divided Studio, where they experienced augmented reality and explored the new Dickinson & Slavery exhibit.

“The students were really engaged, asked a lot of questions and were interested in learning more about the type of research we're currently working on,” says Wingert. “It was a great opportunity for us to share with these aspiring historians what it's like studying history at the college level and the advantages of a small liberal-arts education.”