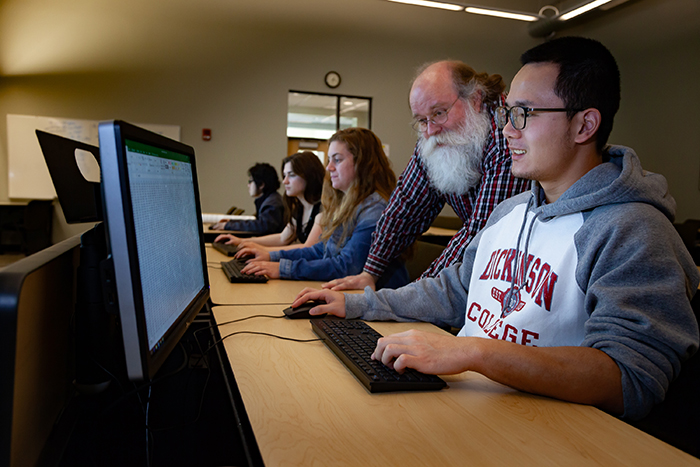 For inquisitive minds, there’s nothing more fun than deep-diving into a topic of great interest and seeing what patterns emerge. For 16 students in Professor of International Business & Management  Steve Erfle’s Applied Empirical Data class, that endeavor was a semesterlong adventure, as they selected areas of study that were meaningful to them and, working in small teams or individually, embarked on their most significant research to date.

One student looked into Airbnb pricing in Boston. Three teams opted to analyze an aspect of baseball—traditionally, the statistician’s game of choice—while two others worked with basketball statistics and one, with soccer. Other topics included the effect of tourism on housing prices at the provincial level in China, the physical fitness of West Point cadets and the effects of social structures on Portuguese high-schoolers’ academic performance.

“My dad worked in the industry, and growing up, I heard around the dinner table how complicated it is to calculate supply and demand, because there are so many variables, and conditions are always changing,” she says, explaining that with too much supply, power lines blow, and with too little, blackouts can occur. “It’s been interesting to learn more about it, and it’s been fun learning how to communicate the findings visually.”

Working with the data they've got

Tram Ton ’19 (mathematics, economics) and Anh Do ’19 (quantitative economics) tested out an idea they'd heard a great deal about growing up in Vietnam—the notion that a parent’s job influences their child’s academic performance. Tweaking that hypothesis to correlate with available data, they investigated correlations between 370 parents’ educational levels and their children’s academic performance. They found connections between mothers’ educational levels and children’s performance. They also discovered that children from larger families did not perform as well as those in smaller families, perhaps because the smaller the family, the more family resources could be poured into each child.

“In previous projects, we have used governmental data in our analyses—and that data is really clean, really polished,” Do says. “That wasn’t the case here. So we had a chance to learn to work with the data we had.”

Putting a spin on it

Roommates Benjamin Carter ’19 and Benjamin Rappaport ’19—both  international business & management majors and Red Devil baseball players—teamed up to study Major League Baseball pitchers’ effectiveness, taking into account all pitches from the 2018 season that resulted in a swing, minus those delivered by pitchers who threw fewer than 50 pitches. Their hypothesis: as the pitcher’s curve-ball and slider spin rates and velocity increased, the batters’ swing rates would also increase. They found a correlation between spin rate and swing rate, but no correlation between swing rate and velocity.

Carter notes that despite all of the scholarship out there on baseball stats, spin rate is a fairly new phenomenon, owing to recently developed high-speed cameras that capture the velocity and spin RPMs of balls coming across the plate—balls moving far too fast for the human eye to see. “This is the biggest project I’ve ever done at Dickinson, and it’s definitely the kind of thing that I can talk about during job interviews,” Carter says.

“It's also by far the most fun project," said Rappaport. "Plus we did a lot of Excel work and SPSS and analyzing data. I learned a ton.”

On campus, and interested in learning more about this class' projects? About 20 student posters are on display in the public area outside Althouse room 104 and will remain there until next year's posters take their place.