On and Off the Court 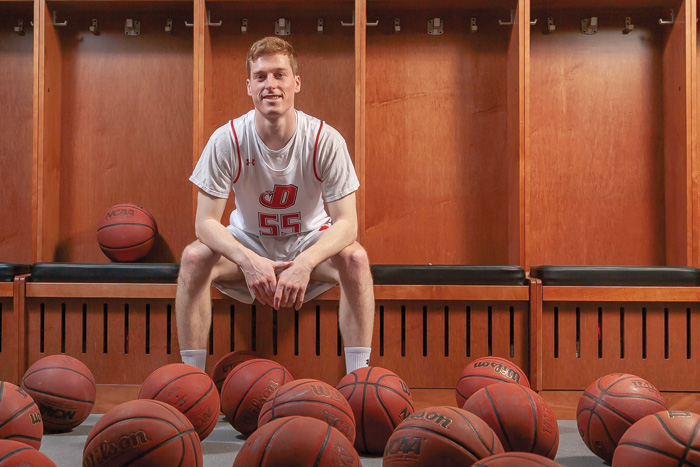 When your dad is so into basketball that he makes sure to buy a house with a driveway perfect for a hoop, the die is probably cast with what sport you’ll end up playing. And that’s just how it worked out for Mike Hinckley ’19, who went from the driveway squad to the guard/forward spot for the Red Devils.

“Growing up, all of the kids in the neighborhood would come to my house after school and play all night,” Hinckley says, noting that he started netting shots in that driveway at age 5. “My dad eventually put in a floodlight so that we could play even later into the night, much to the displeasure of the other parents in the neighborhood.”

The 6-foot-1 Bryn Mawr, Pennsylvania, native was named to the All-Centennial Conference (CC) Men’s Basketball Team this February, and he compiled a slew of great numbers across his four years at Dickinson. After playing in 99 games as a Red Devil, he finished with 922 career points and ranked third alltime in steals with 155 and fifth in assists with 273.

“Making the All-Conference team feels like a culminating achievement for me,” says Hinckley, who averaged 12.3 points and 3.8 rebounds per game this season and led the team with 78 assists and 42 steals. “I’ve been making improvements to my game, so to finally earn this award my senior year makes me feel proud of the effort I’ve put in.”

Across his four years as a Red Devil, Hinckley led the team to three CC playoff appearances and was one of the top free-throw shooters in the country, hitting 91 percent from the line. Hinckley and his teammates got a chance to show off their skills on a whole new kind of away court, when they traveled to Ireland for 10 days, an excursion Hinckley lists among his college highlights.

“This trip allowed us to experience the Irish culture in many different ways,” he says. “Playing a handful of games against Irish professional and national teams gave us a taste of a different style of play, and we even met one of our future teammates, Adam Drummond [class of 2022], while playing against his team in Cork.”

Hinckley hasn’t saved all his energy for the hardwood—he was named to the College Sports Information Directors of America Academic All-District team and is a three-time member of the CC Academic Honor Roll. The psychology and economics major also achieved Dean’s List status throughout his four years at Dickinson and was awarded the John Montgomery Merit Scholarship and the 2018 Joseph J. Myers Prize, the latter for academic achievement and contribution to a varsity athletic program.

With graduation looming, Hinckley now looks to Boston University as his future home. “I’m really excited to be working with athletes and gaining the skills necessary for a career in sports psychology,” he says, noting he’ll be pursuing a master’s in counseling and sports psychology. “While I’m not 100 percent sure what type of setting I’ll be working in down the line, I know that my experiences at Dickinson on and off the court have prepared me well.”