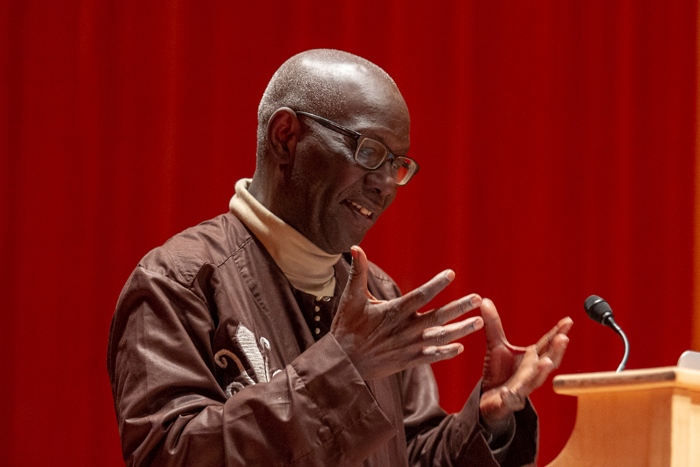 As the world pauses this month to commemorate the 25th anniversary of the genocide in Rwanda, Dickinson College welcomed to campus an esteemed writer whose fictionalized account of a 1994 massacre brought a deeper understanding of the complex issues surrounding postcolonialism in Africa.

Boubacar Boris Diop is the 2018-19 recipient of the Harold and Ethel L. Stellfox Visiting Scholars and Writers Program Award. During his weeklong Stellfox residency at Dickinson, Diop shared insights with students that he gleaned throughout his decadeslong, international career at the nexus of journalism, creative writing and activism.

Born in Dakar, Senegal, Diop is an award-winning novelist and columnist who has written dozens of books, plays and screenplays. His groundbreaking 2000 novel, Murambi: The Book of Bones, was called “a miracle” by legendary American author Toni Morrison and was featured on the Zimbabwe International Book Fair’s list of the 100 best African books of the 20th century. His latest novel, written in the Wolof language, is A Grave for Kocc Barma. He is also professor of literature and creative writing at the American University of Nigeria, and he previously taught at Rutgers University and at Gaston Berger University in Senegal.

At Dickinson, Diop delivered a public address and interacted with students and professors in small groups, and he was the keynote speaker during an April 6  on-campus Africana studies conference, Challenging the Single Story: Interrogating (Mis)Representations of Africa and Its Diaspora. And on Thursday, April 11, Diop observed a longstanding tradition at Dickinson when he posed for a photo, along with students, on the steps of Old West, recreating a 1959 photograph of students and poet Robert Frost. 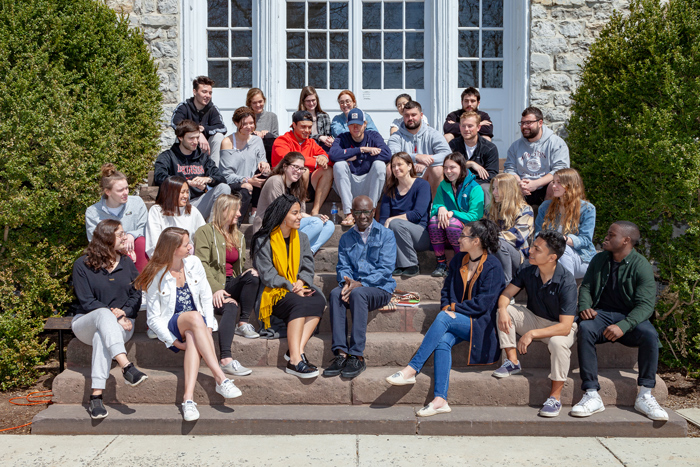 Olin Rhoads ’21 (mathematics) and Molly Gorelick ’19 (English), both creative writing minors, were  among the roughly 30 students who attended the photo session. After reading Diop’s fictional account of the Rwandan genocide and discussing it in class, Rhoads said he was eager to discuss the work with Diop during the Stellfox student luncheon.

“It’s exciting, because we’re able to ask questions and get more insights about what we’re reading,” said Rhoads.

“It’s really cool to be in close contact with a writer who is so accomplished and so prolific,” said Gorelick, who helped out behind the scenes, as a student worker in the English department. “In class, we’re usually reading works by dead poets and dead writers in the canon, and I feel like living writers are a bit of a mystery to the public. So being able to talk with them about their craft and process is special. I don’t know any other place where I’d be able to do that.”