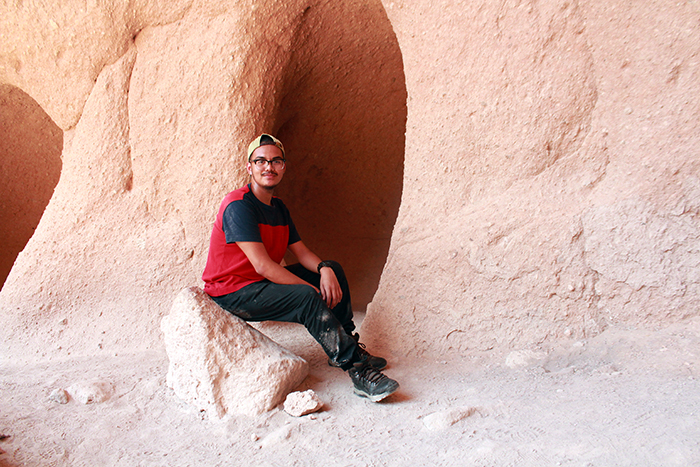 Angelo Tarzona ’21 wants to study the Earth's geologic history to positively impact the Earth's future. To do that, he declared an earth sciences major at Dickinson, which has enabled him to sharpen his geophysical-methods skills through a National Science Foundation-funded internship and get hands-on data-analysis experience through student-faculty research.

I decided to declare earth science because I am interested in studying Earth’s geologic past as the key to the future. Growing up in the Philippines, I became interested in collecting various igneous rocks from Mayon Volcano and Taal Volcano. When I moved here to America, a program at the University of Texas at Austin called GeoFORCE introduced me to geology by giving me a chance to travel to Florida, Arizona, Oregon, Washington, New Mexico, Colorado, Utah and Pennsylvania to understand different geological formations and processes.

… an aerospace engineer and/or an astronaut who analyzes rocks and sediments from different planets.

I decided to attend Dickinson because of the earth sciences program.

ERSC 141, Earth’s Hazards. I learned more about different hazards that might occur in different locations in the Earth. This is like a survival-guide class.

One of the internships I did was a GeoPATHS Participant program, funded by the National Science Foundation. The program brought 17 undergraduate students from different colleges and universities—Rutgers University, Dickinson College, Pennsylvania State University, Indiana University and Temple University—to let them learn more about the four basic geophysical methods: mapping/surveying, seismic, resistivity, and ground penetrating radar. As I learned about these four geophysical methods, I learned how to network with the other 16 undergraduates and the four graduate mentors involved in the program. I also learned how to use my time efficiently when we were out in the field collecting data.

The importance of self-care.

I am researching with [Assistant Professor of Earth Sciences] Jorden Hayes to analyze the data we collected at the GeoPATHS program. Our research is about imaging the critical zone structure, using seismic refraction in Garner Run, at the Susquehanna Shale Hills Critical Zone Observatory. I decided to take on this project to learn more about critical zone observatories, and I learned that being organized throughout data processing is very important, because it helps me have a clear understanding of what I need to do. Last semester, I analyzed and processed data through software called MATLAB.

… energy storage would not be a problem, world hunger is nonexistent, we are all living sustainably, there’s no reliance on fossil fuels as an energy source, and VIP tickets to see Beyoncé and Jay-Z, whenever they go on tour, are cheaper.