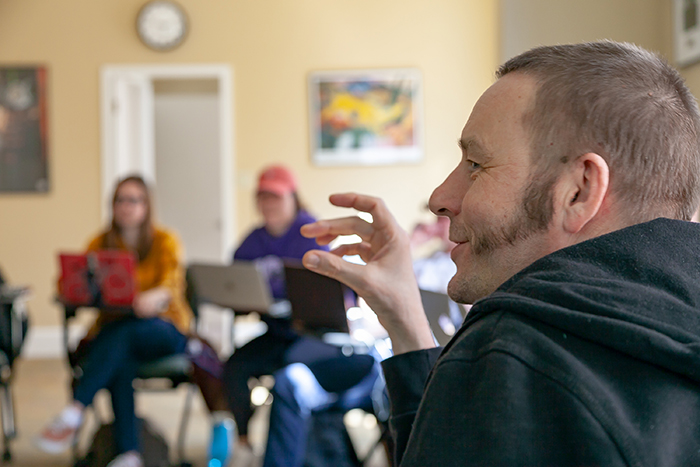 Writer-performer Ahne discusses the fine points of German humor with students during a March 27 class in the Max Kade Institute of German Cultural Studies. Photo by Carl Socolow '77.

Translating the German text into English, line by line, the students hit a snag. The rough literal translation read:

The dolphin lived in sweet water. Therefore, she was sweet.

They understood that “sweet water” was the German term for “freshwater,” so “The dolphin lived in freshwater” was a no-brainer. The question was: What to do with the joke in the following line?

The students—seven German majors and two German minors—were translating the text for an on-campus reading by a well-known visiting German writer. After working through a quick translation the week before, they had a vivid understanding of how difficult it is to translate humor from one language into another. Now, they had an opportunity to hammer out the details of their translation with the author himself.

Ahne (nee Arne Seidel) is an East German writer, humorist and a spoken-word performer, best known in Germany for his four-book radio series, "Zwiegespräche Mit Gott," (“Intimate dialogues with God”) in addition to his seven humorous books and many articles. He also is cofounder and longtime coleader of one of the first “reading stages” in Berlin, bringing authors and other performers together to collaboratively present their works to an audience each week. 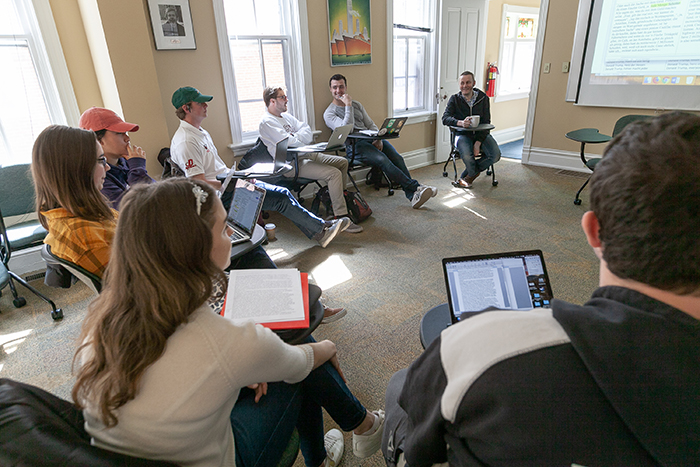 Ahne comes to Dickinson this spring to serve a nine-week residency funded by the Max Kade Foundation German Writer-in-Residence Program, one of many residency programs on campus that brings a new honoree to campus to share work and expertise with students in small groups in and out of class. He has been working with students in German classes and taking part in German department events, including a German Club dinner and German language table. He also blogs about his experiences, all while working on an autobiography.

“We are very happy he is having such a productive time here on campus, as this is the main focus of this grant: to give writers time to do what they can do best,” said Antje Pfannkuchen, associate professor of German.

The students translating Ahne’s writings are enrolled in Pfannkuchen’s German Media course, and they’ve been studying his work. Their English translations of his texts will be projected onto a screen during the author’s public German language reading, “Strong Through Weakness: Ahne Reads, Sings and Drinks.” The Wednesday, April 3, event will be held in Tome 115, at 7 p.m.

Meeting with the writer during their March 27 class, they debated briefly about the “Therefore, she was sweet” joke. Ahne agreed that it worked to substitute the English word “fresh” after the students explained that in English, “fresh” can mean “cool,” or “fashionably pleasing.”

“It’s been good that we have the author right here,” said Frances Youmans ’19 (German, English). “because we can ask him about what the most important and difficult things are, like, ‘What’s the most important thing in this joke? Is it the pun? The rhyme? The meaning?’ ”

“It’s not only that we’re translating a text. We’re also translating a culture and placing it into the context of the English language,” said Stephen Bonacci ’19 (international business & management). “It’s a hard thing to do, and we’ve learned a lot.”