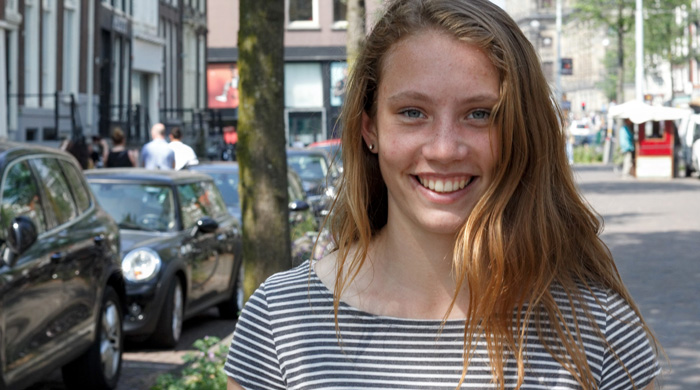 The Advanced Laboratory Physics Association (ALPhA) and the American Association of Physics Teachers (AAPT) together give an annual award for “outstanding work in the development of an advanced laboratory apparatus/experiment by an undergraduate physics student” in the United States.

Notably, the “award is only conferred if the work by the student or students is of exceptional quality, worthy of a national award.” So it’s one award, among endlessly viable students across the country.

And the 2018 award, which was announced recently, went to former physics major Natalie Ferris ’18 for her work as a Dickinson senior with associate professors of physics and astronomy Brett Pearson and David Jackson.

“This was such a wonderful project, and Natalie was a true partner in this research,” says Jackson, who himself was just awarded the 2019 David Halliday and Robert Resnick Award for Excellence in Undergraduate Physics Teaching. “It was like working with a graduate student. Natalie might very well be the most capable student I have ever had the pleasure of working with.”

The project that drew the attention of ALPhA and AAPT was on double-slit interference with partially-coherent light, a classic experiment that explores the wave-like nature of light. As Ferris describes it, “When the light passes through two small slits placed close together, the resulting light coming from each of the slits interferes with itself, generating a repeating pattern. Imagine the ripples produced by dropping two pebbles into still water, but in this case, instead of ripples, the light creates a series of bright and dark spots. My project built on this well-studied experiment and investigates how incoherent light, more similar to regular light, impacts the resulting pattern.”

Jackson points out that while the theory behind double-slit interference with partially coherent light has been well known for more than 50 years, no one had previously demonstrated it in the lab experimentally. As part of the award, Ferris will receive a $4,000 honorarium and travel expenses to the 2019 American Association of Physics Teachers Summer Meeting, where she’ll give a talk. Pearson and Jackson will receive a citation and travel expenses as well.

Ferris now works at the Wellman Center for Photomedicine at Massachusetts General Hospital. There, her research involves developing a noninvasive technique to quantify blood flow rates in the retina, which could help detect the early onset of ocular diseases. And as she plans ahead, continuing her studies in physics and engineering in graduate school next fall, she looks back at what she took away from her Dickinson experience.

"The Dickinson physics curriculum—shout out to the incredible faculty!—uses small-group, inquiry-based courses to allow students to take ownership of the concepts covered during lectures through hands-on experimentation,” Ferris says. “Throughout my time at Dickinson, the physics department pushed us to make connections between the coursework concepts and the world around us. This approach provided me with the tools and knowledge necessary to explore a range of topics creatively and from different perspectives, and the liberal arts are an important aspect of this balance.”