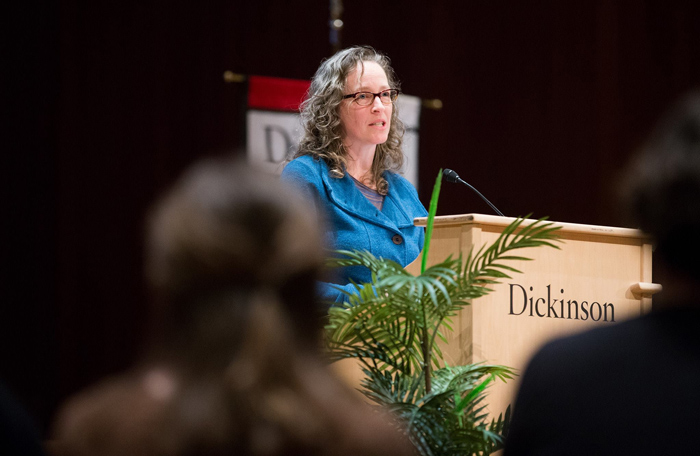 In a landmark ongoing legal case, 21 young people—backed by advocacy group Our Children’s Trust—are suing the federal government over its treatment, or lack thereof, of climate change. The lawsuit, Juliana v. United States, was filed in 2015 and aims to compel the government to develop and carry out a science-based climate recovery plan.

And in late February, Dickinson hosted the executive director of Our Children’s Trust, Julia Olson, whose organization was awarded the 2018-19 Sam Rose ’58 and Julie Walters Prize at Dickinson College for Global Environmental Activism.

“Sam Rose and Julie Walters instituted this amazing opportunity for people and organizations working on the critical questions of climate change,” said Olson, who spent two days on campus as part of the Rose-Walters residency. “And one thing I’ve noticed [at Dickinson] is that, with faculty across many disciplines … there’s a deep level of understanding and a commitment to integrate sustainability and climate change into the curriculum.”

Our Children’s Trust—which received $100,000 as part of the prize—has ties to Dickinson through first-year student Sophie Kivlehan '21 (biochemistry & molecular biology), who is one of the plaintiffs in the lawsuit and the granddaughter of former NASA climatology expert and activist James Hansen, who received Dickinson’s Joseph Priestley Award in 2013. Also, Patrick McGinley '68, who teaches environmental, administrative and natural resources law at the West Virginia University College of Law, serves on Our Children’s Trust’s board of directors.

Along with Olsen’s residency, which included classroom visits and a public lecture titled “No Ordinary Lawsuit: Protecting Our Climate and Democracy,” Our Children’s Trust was represented by its trial and outreach coordinator, Eowyn Soran, who ran a workshop on ways to involve students and the community in climate-awareness efforts.

“We have access to these people, who are making really powerful decisions and leveraging the power that youth and the public have in systems of power that we’ve seen do not necessarily represent everyone and are not good systems for ensuring the future,” said Espoir Delmain ’21 (environmental studies, dance), who attended the workshop. “And having this space with other students who are interested in these issues, and have these values being applied on our campus, and us being the ones who get to enact those, is really important.”