How to Discover Your Voice as a Student Activist 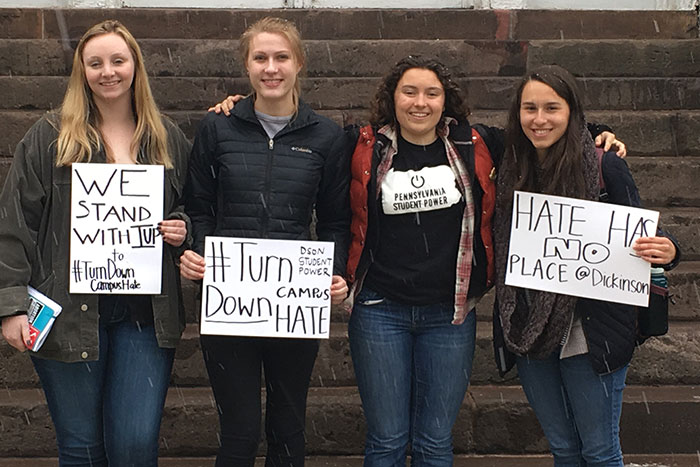 “As I started to get more involved on campus, I had conversations with fellow students about shared passions. Starting a group on campus is hard, but it has definitely led to moments of satisfaction when members have made people stop their daily routines to be confronted with truths.”

Participate. During the first week of classes in 2017, as DACA was radically changed by the Trump administration, there was a powerful sit-in organized by students in the Black Student Union to bring light to these issues and how they affect students on campus. After participating in this event, I began searching for other ways to be a part of movements on campus.

Create connections. As I started to get more involved on campus, I had conversations with fellow students about shared passions. When you meet someone and create a genuine connection, especially in the context of classes or Clarke Forum lectures that cover issues across the globe, you might discover something that makes you feel connected to something bigger than yourself.

Join a group (or start a new one). There are many student groups on college campuses, like the national group Next Gen, or groups focused on voter registration or student empowerment. Alternatively, there are groups on campus that focus on social action, like Feminist Collective, Student Liberation Movement and Tree Club. After coming on campus, Frances Staples ’21 and I began working with the Pennsylvania Student Power Network. On campus, we have been able to engage other students on issues like hate groups and making college accessible for all young people in the commonwealth. Starting a group on campus is hard, but it has definitely led to moments of satisfaction when members have made people stop their daily routines to be confronted with truths.

Work together. We have successfully gotten three out of five congressional candidates for the 10th district to sign off on the College for All pledge, helped host and mediate a debate on campus with these candidates and brought more than 100 student signatures to the administration to prevent hate groups from coming onto our campus. This was only possible because of teamwork, growing friendships and support from PA Student Power Network members off campus and the connections we created with each other and other students on campus.

Espoir DelMain ’21 is an environmental-studies major from Saint Paul, Minnesota. She is a campus sustainability EcoRep, attended the Conference of the Parties (COP) 23 summit in Bonn, Germany, and has worked to bring student voices to the forefront in her first year at Dickinson.