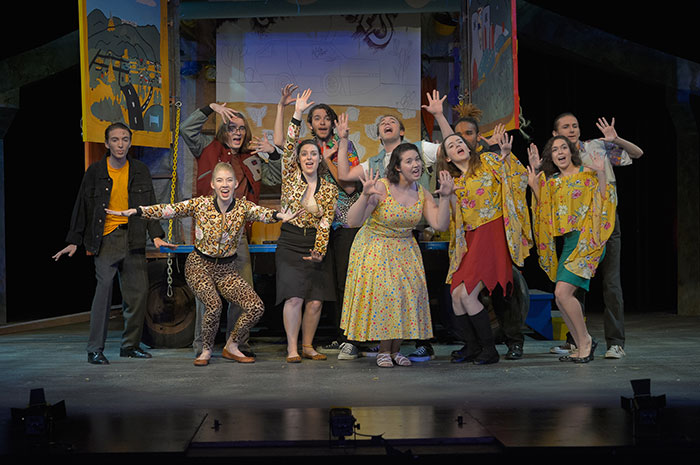 The Department of Theatre & Dance took the classics into bold new territory with four fall productions that ventured outside of the mainstream. Each cast new light on a well-known work or venue while revealing boundary-bending ways that today’s artists are transforming how we experience art.

Kicking off the season, Kent Barrett, assistant professor of theatre design, teamed with artist Mary Olin Geiger to create PARADIZ’D, a work inspired by the first book of Paradise Lost. Using fantastical sculpture, live music, multimedia and passages from the text, the cast of students, professors, young alumni and community members brought Milton into the postmodern era—and more directly to audience members, as they were invited to join the cast in dances, board games and other goings-on.

“We wanted a complete blending between performer and audience, so that there was no delineation and no stage space,” says Barrett.

Audience participation also was key to Project3, a November dance concert performed by students and choreographed by Visiting Assistant Professor of Dance Erin Crawley-Woods and the artistic directors of Baltimore’s Orange Grove Dance. Several different works, each inspired by original research on the Carlisle Theatre’s long history, were performed simultaneously in different spots on the theatre’s second floor. Much like visitors in an art gallery, audience members could decide how long they wanted to stay in a given spot and what they wanted to see next.

Widely loved works from television and literature were vividly reimagined in performances by students and visiting artists. The Mermaid Players put a hallucinatory spin on TV’s The Simpsons when they staged Mr. Burns: A Post-Apocalyptic Play. Pendragon Theatre, directed by Professor of Theatre Karen Kirkham, presented Kate Hamill’s boisterous adaptation of Pride and Prejudice. While set in Austen’s era, and remaining true to the original work’s wit and universal themes, Pendragon’s production also included thoroughly modern gags and creative casting.

As vital as it is for theatre students to be aware of innovative productions like these, all Dickinsonians can benefit from them, says Kirkham.

“There’s so much out there that students may not have been exposed to before coming to college,” she explains. “This opens up a whole new world of possibilities to them, either as artists or patrons of the arts, and that’s something that they’ll take with them throughout their lives.”